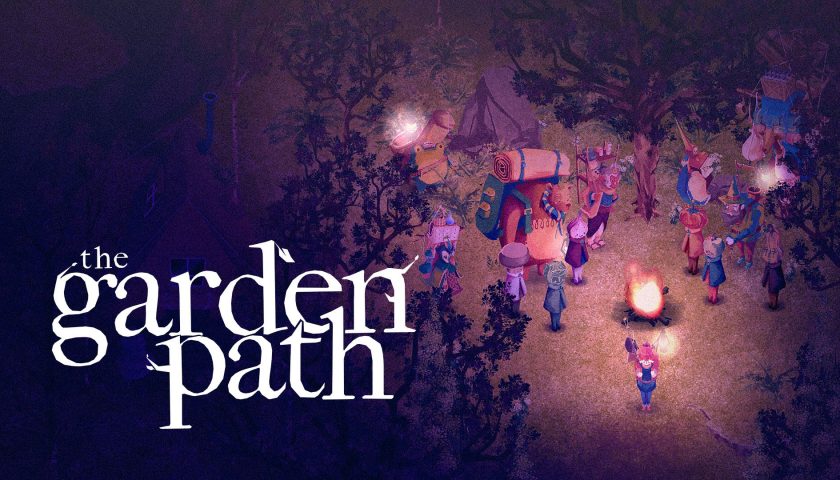 With the rise in recent years of the cottage core farm/garden sim game – prompted primarily by the explosion in popularity of Stardew Valley – we’re quite spoiled for choice in 2021. To stand out in this framework, you need to have a good hook that differentiates you from the rest. The Garden Path aims to do so by focusing less on the capitalistic cycle of growth and profit, and more on being in balance with the nature surrounding you.

The recently made public demo of The Garden Path is more of a tone piece for what the final game offers, with a collection of mechanics reinforcing it’s ideals. You’re given a small space to wander around, a few NPCs to chat with and a whole lot of nature to just be in.

It’s already quite polished for a demo, with an air of whimsy accompanying every motion you make across its gorgeous painterly landscape. Each NPC helps acquaint you with a way of interacting with the world, whether that be trading, collecting, planting or fishing. There’s clearly more to come: hints about making different kinds of teas crop up for example. If that was in the demo, I never found it.

Where farming games often build to a sense of machine-like efficiency in their gathering potential, The Garden Path feels much more intentional. Foraging for brush cuttings and plant clippings has a quiet deliberation to it; using your secateurs, you’ll gather sprigs and leaves of various plants, and while you can cut down all the plant life round you, you’re incentivised to let plants regrow with “healthy” and “damaged” labels. Another NPC encourages you to trade various items for their seeds, which you can then dig a hole anywhere for and plant. Fishing is a slow experience, focused on using the power of song to draw a fish up toward your line and out of the water – a single catch feels monumental.

Instead of the usual in-game timer cycling through the days, weeks and months, The Garden Path syncs up with your PC clock for its ever-changing world. Rather than being a hardcore game you sit down and lose 150 hours to over the course of a few weeks – something I have never done with a farming game, no sir, definitely not – this world is built to be a relaxing, poke around and see how things are evolving, then come back a while later to check-in form of experience. In a lot of ways, this epitomises the joys of real-life gardening in ways other more “hardcore” games do not – putting in the initial effort, nurturing your budding seedlings, then enjoying the symbiotic collaboration that is growing your own garden.

If this sounds like it would be up your alley, you should definitely check out the demo on itch.io for yourself. As a part of the launch of this demo, solo dev Louis Durrant has launched a Kickstarter, seeking funds to see this dream through to the finish line. I can’t wait to get my hands on the full release when it hits – which, with a bit of luck, should see the light of day sometime later this year.