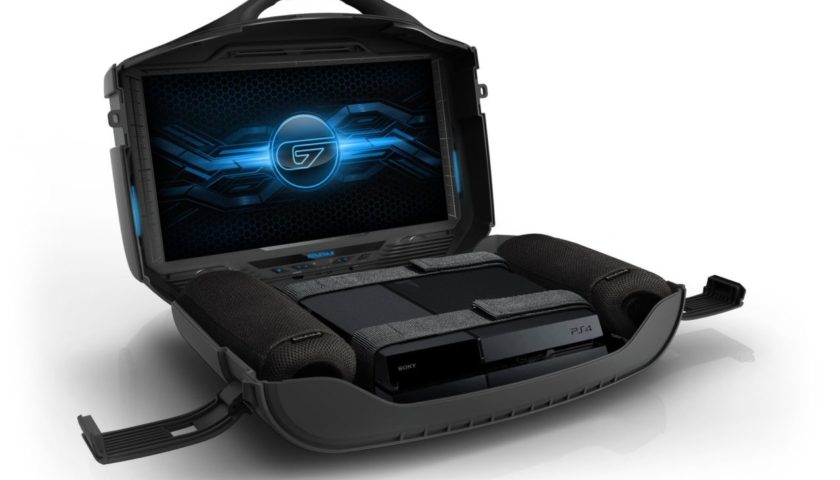 Travelling as a gamer can be tough. It is hard to take your consoles with you when you are tripping around the countryside. Most hotels lock their TV’s down so you can’t plug your consoles into them and if you are visiting relatives, well they tend to get irritable if you take over their daily soaps with a round of Halo. I have also run into the extra problem of the need to keep Player 2 running and therefore I really need to bring my consoles with me if I am away for more than a couple of days. Thankfully there is a solution out there and that is the GAEMS Vanguard.

The GAEMS Vanguard Black Edition is essentially a hard briefcase that contains a 17′ built in monitor and speakers. There is space for a console and some handy pouches for cables and such. It is a very logical solution to the travelling console problem. The whole design shows a lot of thought has been put into it. Consoles, once they are strapped in, are secure and don’t move and everything feels extremely well built and sturdy. The outer casing is rock solid and looks like it could take a serious beating, which is a nice comfort when you have it sitting in the boot of the car. What’s more, the whole thing has been designed with Airline specs in mind so there is the security of knowing that it can be taken on a plane as carry-on luggage and not left in the hands of butterfingered baggage handlers.

The monitor is only 720p but to be honest I didn’t notice much different when playing games on a screen that small. The only problem with the display I noticed was that my PS4 had a few issues adjusting to the resolution automatically, but that was fixed by simply changing a setting in the PS4 menus. The sound, while not the best, is perfectly fine and if I needed something a bit more I could always plug my headphones into one of the two headphone jacks at the bottom of the monitor. The unit even comes with remote, which admittedly is a bit pointless considering how close to the monitor I sat to play games but it was nice when I used the system to watch Netflix in bed. It is also worth pointing out that the unit fits just about any console known to man, just as long as it uses a HDMI cord to connect (there are no old school RCA plugs).  It even fits the very chunky original Xbox One.

Perhaps the biggest problem with the unit is its price. At nearly $700 this isn’t a cheap purchase. That being said there are refurbished units available from Australian distributor Bluemouth Interactive for a significantly cheaper price.  Even still it is a hefty investment and one that will likely only be for those that travel on a regular basis or those that simply cannot leave home without their gaming fix. For me, as games writer and regular traveller, it is a perfect fit and well worth the money I spent on it.

In all the GAEMS Vanguard is a well-built, well-designed solution to the gaming on-the-go problem. It is however, an expensive solution that will likely put a large amount of people off. That being said if you are a member of the travelling gamers group it is certainly worth saving up your pennies for.