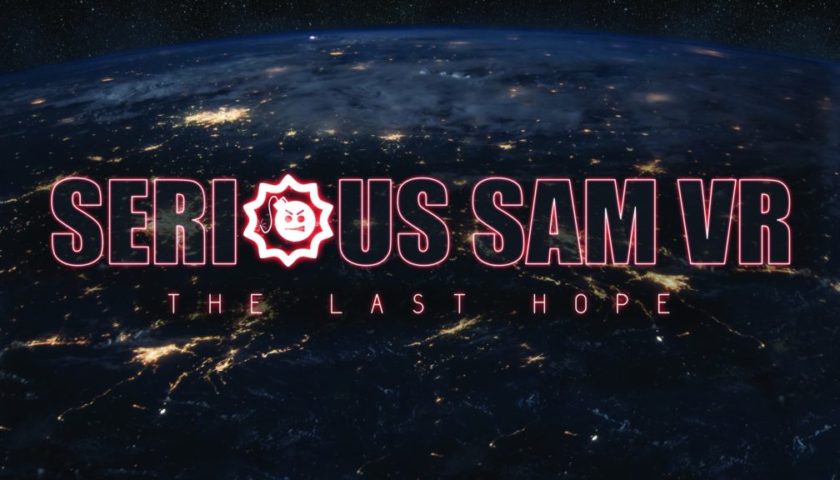 What makes the world of Virtual Reality development so exciting is that it truly is the first wave of ideas and creativity. The stage where everyone is still trying to figure out what does and doesn’t work as well creating a whole new branch of gameplay that we’ve never experienced before. Probably the most interesting trend we’ve been seeing lately though is when game developers cut it all back and deliver a conservative effort but have an end product that feels like a completely new and innovative experience. Yes VR really is the wild west of game design at the moment, and one of its latest deliveries is Serious Sam – The last hope!

This latest effort from Croteam can easily fall into this description. At its core you’re the one and only, Serious Sam! But don’t expect to be running around, mowing down alien hordes. Movement is limited to looking around from side to side and controlling each hand at any given time. Gameplay is then, essentially, shooting ten shades of crap out of the swarming enemies coming your way until the level has ended. To describe the feeling in a bit more depth, it feels like the old light gun shooters from yesteryear.

Now before your eyes roll and you pass this up, believe me when I say that the Oculus, combined with the touch controllers, makes this a whole new experience. You’ll legitimately get stressed looking up, down and side to side when you hear enemies creeping up on you after your attention has been focused elsewhere. Even on easy mode some of these levels were posing an instant challenge. In between levels you can use the points you’ve obtained to get better guns, health regen and ammo packs. Some of these seem fairly redundant though because during a level you’ll get air drops which replenish said health as well as refilling your ammo on your upgraded guns.

There is an instant level of immersion and satisfaction with this game, you’re no longer playing Serious Sam, you ARE Serious Sam. With both arms stretched out, you feel like you’re the star of an action movie as you mow down the waves of aliens heading straight for you. The only downer on this is that currently there’s only three levels to go through, so the experience is fairly short lived. Of course there are more on the way, as well as a co-op mode, so one can expect those to drop in the foreseeable future.

If you’ve got an Oculus setup and looking for a fun title to add to your collection, you could do a lot worse than check this one out on the Oculus store.

*Editors Note* This is also available to VIVE users on Steam