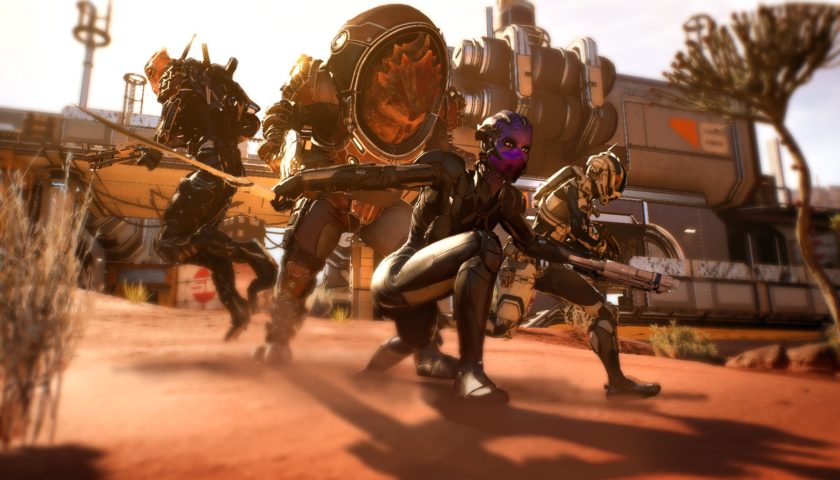 Adventures in Andromeda – A Co-op Addiction

To say I have spent a few hours in the Mass Effect universe would be an understatement. With the original game, I took out Saren three times and in the second title the Collectors’ base suffered my wrath on no less than 6 occasions. But something changed with the third game. Despite the fact I spent more time with ME3 than the other two titles I only finished the game twice. Something more appealing had come along in the game, something that honestly, I didn’t see coming. That was the co-op multiplayer and it claimed all of my spare time.

I think it is fair to say most people were pretty unimpressed when Bioware announced MP for Mass Effect 3. Most, myself included, thought it nothing more than a tick on the back of the box for the game. Much to my surprise, it was a wonderful addition that soaked a huge amount of my gaming time with its wave-based co-op gameplay. It had the wonderful feeling of horde mode from Gears but in much smaller doses, allowing me to knock out a quick game or two without too much of a time commitment. Add to this a steady drip feed of interesting playable characters, entertaining weapons and cool maps and ME 3 became my go to multiplayer experience for a very long time

So when Mass Effect: Andromeda hit my console one of the first things I wanted to dive into was the multiplayer component and I am pleased to say that it has got its hooks in me once again. In fact, I can easily see myself hunkering down with this mode for years to come.

Why is that? Well, I think it is a number of things. For one I have never been much of a competitive shooter fan. I simply don’t have the time to dedicate to one game to become anything more than a middle-of-the-leaderboard style player. It just takes too much commitment. But in ME:A that isn’t an issue. It is four people vs the combined forces of Weird space aliens/cranky rebels/Funky Robots. It is in everyone’s best interest to work as a team and help each other out. No one is out there just for their K/D ratio and there are no fights about staying “on objective”. Four people with cool powers and big guns working together.

I also like that there is a low barrier of entry for new players or people trying new things. No one gets upset if you are playing as a level one character because they know they will be in the same boat sooner or later. It has been put together in a way that almost negates all of the toxicity (I said “almost”) that is found in online games. I cannot tell you how much I adore that. It is the one game that I don’t automatically reach for the mute button (unless someone has Beiber blasting in the background). In fact, I have even found random players to be helpful on mics….. shocking I know.

But perhaps the thing I love the most about the multiplayer is the variety of ways it can be played. Each weapon, each character, each power brings a different approach and that keeps the gameplay fresh for a long period. Mixing and matching weapons and powers is a wonderful experiment to partake in and often produces surprising ways to tackle enemies. I can play as a Krogan Shotgunner with up-close-and-personal biotic slams, an Asari Commando with devastating area-of-effect attacks, a Human sniper with tech assists or anything in between. Each possible combination is rewarding and enjoyable in its own right.

That’s not to say there are things I don’t like about the multiplayer so far. I feel it needs a few more maps and there are a few too many lag problems for my liking but otherwise, my feelings are overwhelmingly positive towards Andromeda’s co-op mode. Hopefully, Bioware gives it the support it deserves with the addition of new maps, races, classes and enemies over time to keep things fresh and keep the interest there. If they can do this and makes sure the microtransactions never become too influential then there is no reason why I won’t be playing for a long time to come.