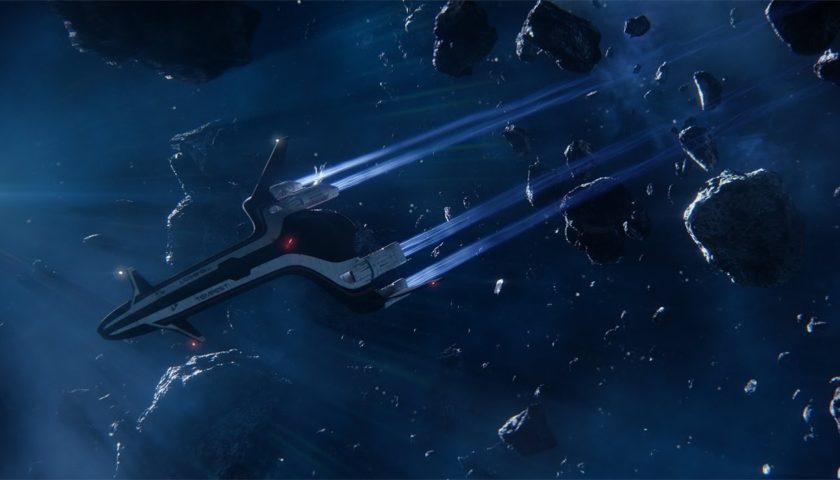 Adventures in Andromeda – Riding in Style

When you’re making your way through the depths of space you’re going to be in desperate need of vehicles that will efficiently get you from point to point. In the original Mass Effect trilogy we were introduced to the Mako and of course the SSV Normandy. The Normandy was an iconic ship that when paired with the Mass Relays allowed Commander Shepard to traverse the galaxy in next to no time at all. The Normandy was a beloved part of the franchise, and with thanks to those who lived in it as well as the many secrets concealed within, it felt like another character in your adventure, not just the means to an end.

The Mako on the other hand was supposed to be the all-terrain vehicle that enabled your team to cross nasty planet surfaces quickly; but ultimately it was a clunky, bumper-car that never really responded in the way you wanted it to. The Mako was so bad that when Mass Effect 2 rolled along, it was left to build rust and gather dust in a storage garage somewhere – and many a Mass Effect player rejoiced. Deep down though we always held a hope that Bioware would revisit the concept of the Mako, make improvements and give us some 4-6 wheeled fun in future games and while the Mako was never sighted again in the original trilogy, its legacy now lives on in Andromeda.

It took only a couple of hours of adventuring in Andromeda before you assumed control of the Tempest and begin zipping from planet to planet, deriving the same satisfying feeling from it as you did the Normandy. The Tempest has the same impressive personality that the Normandy did, the vessel is full of life, the crew living there are full of energy, while there’s a tonne to explore and uncover. The Tempest made the same hairs on the back of my neck stand up that the Normandy once did, and it’s a thrill to be at the helm of such a splendid aircraft. Shortly after that, your adventure takes you to the sandstorm swept, radiation soaked plains of Eos, where you’ll get your first experience with the Nomad – the new and improved Mako.

I was immediately struck by how much better it feels to handle the Nomad. There was greater depth to the controls and while it still handled quite loosely, there are a number of different features present that allowed you to traverse any environment with the greatest ease. In my first test of the Nomand, I slammed the pedal to the metal to put it through its paces – tick – the Nomad took all that I threw at it with nary a concern. I went and hunted down some tighter paths that would force me to drive with a great deal of precision if I wanted to survive – tick – there was enough nuance to the controls, and you could quite easily manage the acceleration of it to ensure you never overshot your target. Most importantly though for any prospective bush bashers, the Nomad is equipped to tackle a range of different environments thanks to the ability to flick from 4WD (Four Wheel Drive) to 6WD (Six Wheel Drive). In 4WD the Nomad will handle just as I’ve previously spoken of – it’s zippy, handles well and can turn on a dime, however in the case of 6WD, top speed is much slower, it’s a speed that allows for the driver to easier address some of those more narrow pathways. 6WD also enables you to ascend steeper paths that would be out of reach if you remained in the default 4WD mode.

I’m not typically a driving game enthusiast, in fact, the most interest I’ve shown in driving in video games has been in the Mario Kart franchise. It cannot be stressed enough how obvious it is that Bioware has reflected on the positives and negatives aspects of the original Mako, and pulled on all the right strings to ensure that the Nomad ticks all the boxes. It’s obvious to even someone like myself, with such a limited knowledge of, and ability with, vehicles in games, that the Nomad is an enormous step forward, and I for one, dread any potential future Mass Effect where the Nomad, or another vehicular equivalent is not along for the ride.