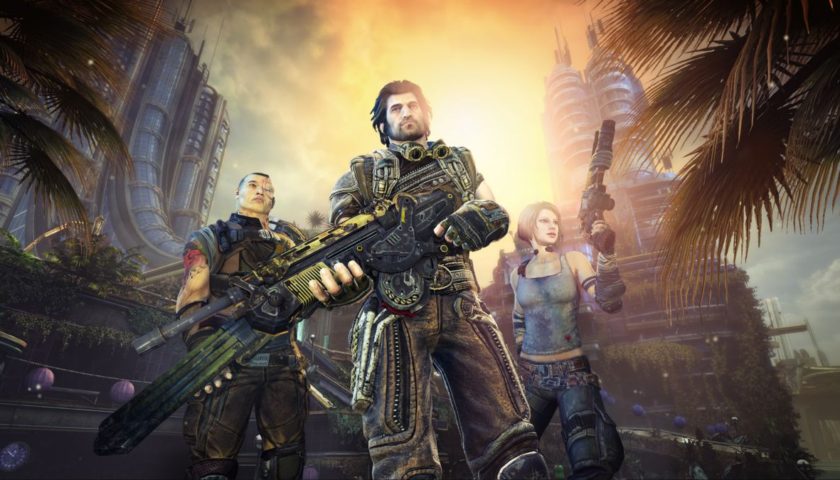 Occasionally games deserve a re-release, they just do. For whatever reason, some games just miss their audience upon initial release and fail to sell as well as they should. Bulletstorm is one such game. Its brand of crazy over-the-top shooting was largely missed by the gaming public when it was released during the last generation of consoles, but since then it has grown into something of a cult favourite. So with the help of Gearbox Software, developers People May Fly have taken another stab at unleashing the game on the public. The question is how does it hold up on a new generation of consoles?

For those that missed it on its first tour of duty, Bulletstorm is a frantic FPS that’s key gimmick is an electro-leash that call pull enemies and objects towards the player. This combined with a host of environmental hazards, some crazy weapons and a good old fashioned kick creates a plethora of ways to dispatch the enemy hordes. Leash an enemy through a barb wire fence to impale him on it, kick an enemy into a spinning fan, shoot a toxic plant to poison a group or simply kick them into the air for a game of trapshooting. What’s more, the game encourages creative killing by rewarding players with points for kills. The more creative, the more points. These points can then be used to upgrade and resupply weapons so it is to the player’s benefit to get as crazy as possible with what’s on hand. This gameplay loop is the real star of the show and thanks to its wonderful implementation it never grows old.

Graphically the game isn’t a world beater, which is to be expected as it is an HD re-release, but in saying that it doesn’t look bad either. The level design, especially in the case of the outdoor maps, is wonderful and the enemies are all appropriately detailed. The main character models don’t fare as well, with the game’s age showing through in cut scenes but it certainly isn’t a game breaker. The fact that Bulletstorm holds up so well really is a testament to the Unreal engine and how good the game looked when it first came out.

The story for Bulletstorm is simple, crass and thoroughly enjoyable. The tale of 4 warriors, past their prime, out for revenge on a General that abused their trust is as old as time, however, the game sells it with its unashamed excessive nature. Swearing, racial slurs and more swearing abound and while some things will make players shake their heads and cringe, generally the ridiculous nature of the game makes these foul interactions work. It is all about context and within the context of Bulletstorm, the gutter language and base humour shines.

Speaking of base humour, one of the bonuses available with the re-release is the ability to play as Duke Nukem through the campaign. While initially novel, what this does is only serve to remind how much of a dinosaur Duke is. Bulletstorm spends its whole time parodying the over-the-top nature of past action games, so Duke’s appearance becomes jarring and a little unsettling. The fact that his Misogynistic attitude seems backward and offensive even in a game such as Bulletstorm shows how out-of-date the whole Duke Nukem shtick is. Playing as Duke only detracts from the game so it is best avoided at all costs.

The other major downside to the game is a simple one, cost. The game retails as at a full Triple-A price tag in Australia. There simply hasn’t been enough done or added to the game to justify that price of entry. Add to this that the main game is only about 5-7 hours long on Normal difficulty and the value-for-money on offer is pretty slim. If the game was around the $40 dollar mark it would be very easy to recommend to everyone, but as it is only people desperate to play should be considering it right now. Everyone else should wait until the inevitable price drop.

Cost aside, Bulletstorm offers a lot of intense shooting for all that take up its challenge. The game has a wonderful skill based loop that encourages creativity and risk and it has an excessive story that drives players forward without slowing down the action. The addition of Duke is a misstep but it is one that can be ignored. If you already own Bulletstorm there isn’t much new here for you, however, if you missed it (like many did) it really is a unique spin on the FPS genre that is well worth playing. Just wait till the price drops before you dip your toes in.