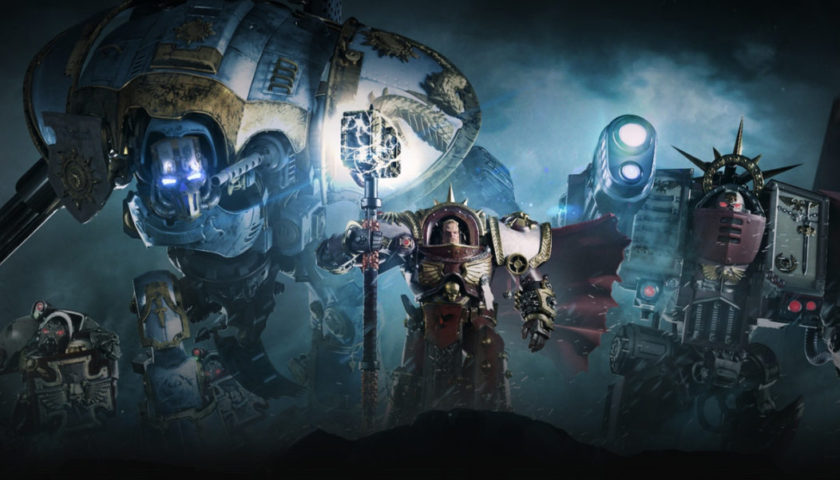 Last Week, Glen got down and dirty with Dawn of War III’s multiplayer but failed to mention the Single player campaign mode, so that is where I am going to step in. I have been playing the single player mode off and on for a few weeks and now and am ready to report back on whether or not I enjoy mass Orc genocide or if the Eldar were just too pompous for any sane person to handle.

The single player story for Dawn of War III is an interesting take on the traditional RTS formula. Instead of having three separate campaigns, one for each race, there is one over-arching narrative and each level saw me playing as a different species. What was interesting about it was the way that the stories intertwined with each other. Events from one mission would lead into the next flawlessly even though I was playing as a different race. This is mainly due to some very clever writing from Relic and it has created a singleplayer mode that feels different from the norm, yet familiar enough that genre fans won’t feel lost.

Gameplay consists of traditional RTS style missions. There were missions that required me to guide a small number of units through the map, missions that required me to wipe out the enemy’s base and missions that were a combination of the two. Perhaps the most interesting component of the game structure is the optional mission goals within each level. It is these goals that really added something a little different to proceedings and they were well worth completing in each level. They added little wrinkles to the standard formula that forced me to adapt and change my approach and that was something I really appreciated.

One other feature I really appreciated was the adaptability of the units. Dawn of War III features a healthy amount of different units as it is but I had the ability to upgrade these units with new skills and weapons on the fly. These abilities and weapons could really make a difference in many situations. For example, in one mission I found myself being swarmed by mobs of Orcs who kept chipping away at my army, however, once I upgraded a few of my Space Marines squads to carry flame throwers that Orc invasion became little more than a terrible smelling BBQ. These little on-the-fly tactical adjustments are something that Relic has always done well and Dawn of War 3 is no exception.

The game does have some issues however. Base building and resource gathering have been simplified to a point that I have to wonder if there are plans to port this game to consoles. There seemed to be a very limited number of buildings at my disposal and almost no defensive buildings to speak of (apart from a very weak gun that can be placed on resources). This part of the game feels too simple and there appears to be pretty much only one path to building a successful base. Excellent examples of RTS games such as Starcraft and Command and Conquer have multiple ways to setup bases, each being equally valid, however, with only one real route, Dawn of War III feels underwhelming and unsatisfying in this regard. Resource gathering is also a simple matter with both types of resources being harvested by the same point and there are not resource gathering units required. This, once again, feels stripped down and a little underwhelming, especially when compared with other classic games in the genre.

Each of the three races seem different enough to encourage different tactics. The Space Marines felt to me like the happy middle ground between the Orc’s high damage/low health units and the Eldar’s advanced tech/high-cost structure. It feels very similar to the balance found in Starcraft and let’s face it, there are worse games to copy. The big difference in DoW III however, is the hero units. These beast units can often mean the difference between victory and defeat, making it a priority to level them up and keep them alive. I enjoyed what these units brought to the fold and they certainly could be a game changer if used in the right way.

In all, my time with DoW III’s singleplayer mode was an enjoyable romp. It has its issues, especially with the base building component, but in all this is a very solid RTS game for genre fans. It doesn’t too anything to break the mold but there are some nice touches and points of difference that fans will appreciate. Considering the RTS genre has been a little light for new releases lately this one should be a no-brainer for fans of both RTS and Warhammer. If you are looking for a radical re-invention of the genre or even something similar to the squad focused Dawn of War II you should look elsewhere but everyone else will be well served with this tactical slice of the Warhammer 4k universe.