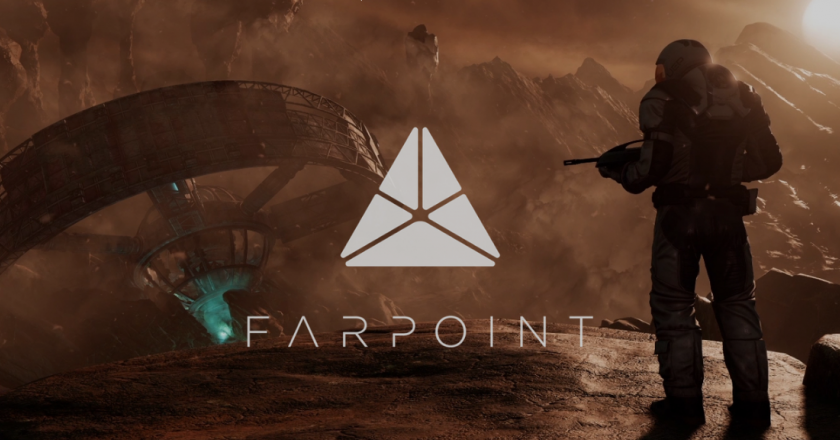 The games industry has been waiting with baited breath for nearly a year for a piece of software to justify the existence of Virtual Reality platforms from Oculus Rift, to the HTC Vive or even the Playstation VR. We’ve been witness to several admirable attempts at creating truly immerse VR experiences, but few have yet blurred the line between this bold VR driven future and traditional gaming – and then came along Farpoint. Farpoint, the product of the merger between Playstation VR, traditional mechanics and the VR Aim Controller seeks to elevate the VR gaming experience to new levels, and despite the tech holding back the game in some aspects of its design, overall Farpoint is a wonderful step forward for VR Gaming.

There’s very little meat on the bones of the Farpoint narrative. A complication in space leads to the crash landing of several vessels on a mysterious, uninhabited planet, as so the exercise in survival begins. The thin threads of a narrative aren’t really tied together and completed by the game has run its course, which is disappointing because despite its fairly generic premise, there was much more I wanted to learn about the predicament I was in, and the planet I found myself on.

The main hook of Farpoint though is not its narrative, but of course the gameplay. VR games are currently somewhat limited in their scope and in this respect Farpoint is no different, though it’s perhaps the most open of the lot thus far. Using the VR Aim controller you can both gaze down the barrel of your weapon of choice, and steer where you’re walking via a combination of your real-life aim and the front analogue stick. Things can get somewhat disorienting when an enemy gets behind you largely due to the PSVR struggling somewhat when you’ve turned 180 degrees, while there was one moment where my controller appeared to lose sync with the game making it incredibly hard to point in the intended direction.

Farpoint is quite dated in some respects compared to other modern day first person shooters. You won’t find a game in 2017, or frankly since 2010 that is nearly as linear as Farpoint, and a large part of that is a result of the limitations of Virtual Reality in its current state. The consequence though is very little to explore, and little to interact with outside of ammo pickups and the occasional environmental scan which progresses the primary mission.

Outside of the primary single player content, there’s more to explore. There are co-operative missions as well as scored, arcade style challenge levels that give you a bit more to do, with the run up the leaderboard keeping you interested for quite some time beyond the completion of the campaign. Despite the campaign being quite by the numbers, the co-op missions are unique and varied, with multiple difficulty levels and back-to-back waves of enemies to endure that make the mode sufficiently challenging even with a partner.

Though Farpoint doesn’t boast much depth, and at times it feels like little more than a shooting gallery, Farpoint stands as a pivotal milestone in the journey of VR as a viable, successful platform. While the game itself isn’t especially notable in the traditional context, what it does in the VR space is extraordinary. Despite leaning on so many known troupes, the sense of immersion that the Farpoint creates as a result of you being placed into the environment makes for a tension filled experience, one that kept me constantly engaged throughout. Owners of a Playstation VR headset owe it to themselves to check out this game, not because it’s an extraordinary jump in design, but because of the step it takes on behalf of the technological side of the industry. Farpoint has further opened my eyes to what Virtual Reality is capable of in the gaming space, and serves up a solid game along the way.