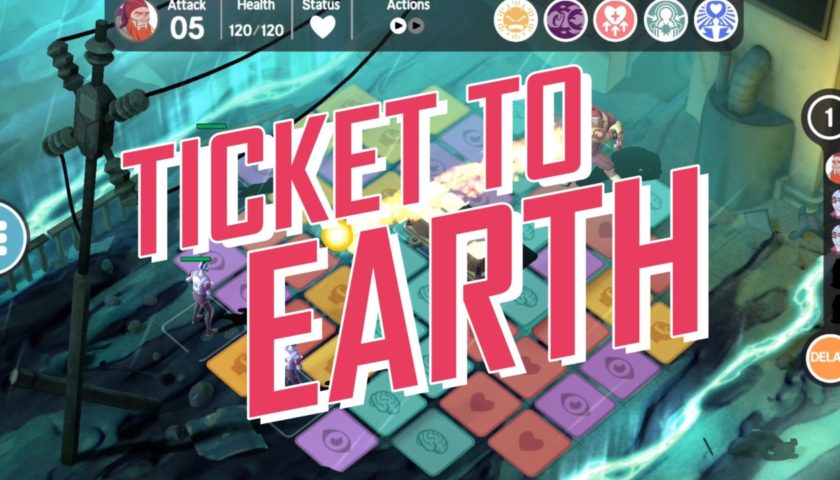 You know what I have always wanted from games like Tetris and Bejeweled and Zuma’s Revenge?  TIME. Time to consider my strategy, time to line up that puzzle piece, and time to get the best result that I can. Sure, puzzle games cater to my secret addiction for best scores and bonuses, but there is hardly a moment to pause and appreciate your handiwork as blocks disappear from view and the numbers increase.

Ticket to Earth is another one of those “clear coloured blocks” games, but is not the puzzle game that you expected it to be. Sure, there is the incentive to connect coloured tiles into long elaborate tallying lines, but its purpose is embedded in strategy – turning this activity into a delicately woven dance around rebelling robots and revolting alien roaches.

Everything that Robot Circus put into this game is carefully crafted by artisans who want all of the player’s precious moments spent slowly appreciating something beautiful and meaningful.

It starts in the overarching narrative – while some would argue the necessity for story in a puzzle game (even Death Squared approached this as commentary rather than character development), it allows the player to see the world through the eyes of the avatar, Rose. Rose is a simple town gardener on New Providence, a settlement that is about to close down at the end of the mining boom. The last lucky inhabitants are given the opportunity to purchase tickets back to Earth. Understandably, tickets are in high demand for this very last ship, and the inequity of the economical upper class having a simple means to depart New Providence incites civil unrest. Rose and her friend Xen are caught in the middle, and Rose empowers herself with her old martial arts lessons to engage with the Stellar Consciousness Movement, unlocking powers to try and maintain peace. It is a simple premise but care has been taken in representing these characters as they try to deal with the social upheaval around them.

The narrative is mainly communicated in a visual novel format. The text dialogue is well-written and the art in each of the comic panels is clean and colourful. The cut scenes between each chapter of the story are complimented with text communications that can be selected from the side menu, highlighting supporting characters as well as antagonists. However, I loved the map screen most of all, for all of its gorgeous detail of a dying colony. The music compliments the future dystopia, with a dramatic string theme supported by mechanical percussive and trance elements. It provides a sense of drive and momentum to the game.

Contextualising the game grid as a representation of “Movement” is another clever decision, with each colour representing a different power – Hand, Eye, Heart and Mind. While initially these unlock melee attacks, ranged attacks, increased health, or redistribution of tiles, each completed mission will reward you with credits to unlock better powers. Some of these powers are more effective of biological targets, while others will obliterate the malfunctioning robot units. This allows the player to personalise Rose to their play style, which is the core RPG mechanic.

It would be a safe assumption that the primary strategy would be to create long lines across the grid – this sees Rose run across the tiles in a flawless animation, and her damage modifier increase to a maximum of 20. However, sometimes the player’s decisions are more evasive to ensure that Rose is not attacked by the enemy (which reduces the damage modifier as well as Rose’s health). It is a great way to ensure that different strategies are considered frequently, and this is further enhanced by a randomly generated game grid on every mission. While some have experienced difficulty with the random tile generation being detrimental to achieving mission goals, I have enjoyed the challenge and the opportunity to play missions again just so I can create even longer Movement lines across the game grid and smack unsuspecting robots with my sword.

I have loved each segment that I have played so far in Ticket to Earth – the game is a wonderfully polished product from Robot Circus, and is a beautiful debut title for one of Australia’s newest independent games studios. In keeping with the priority on narrative and ensuring game quality, Robot Circus is releasing the game episodically. However, each of the future episodes will be free updates rather than paid downloadable content, making a purchase now a no-brainer.