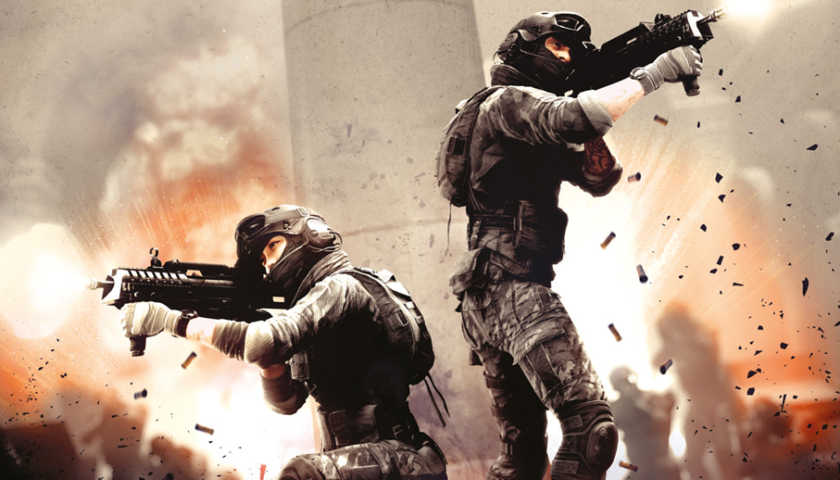 The Rorke’s (Adam and Anna) made it their mission to tackle as many games as they could during the three days at PAX and then report back to us all what they found. Today it is Adams turn.

Games, games and games! Yes PAX AUS has been and gone and my God the games were great this year! The entire event is great of course but every year I look forward to these playing some new original titles or even catching up with games that have spent a year in development. Here are some of the awesome titles on the showroom floor on the weekend:

The PSVR is showing no signs of slowing down and Sony had a few new titles on the showroom floor at PAX AUS this year. The Player2 team managed to check out one title in particular, Team Bravo. Essentially this game is a co-op shooter where you play a special-forces solider taking out an enemy threat. In the demo, I was teaming up with another player and we communicated our movements and timing to take progress further in the game.

A common mechanic in any VR game is the ‘warp/teleport’ function as this avoids the VR sickness that many people get and allows you to move throughout the game. Team Bravo does this a little differently though, there are a number of fixed positions for you to choose from and selecting one and hitting ‘go’ will take you into a 3rd person view as you watch your character move to said position. This works fairly well and adds a level of strategy as it’s not an instant warp and running to cover at the wrong time will result in you getting shot in the face. Like all games on the PSVR, the handling and movement felt great and this title alone would be a really fun title to play with your friends! Check out more info here: https://www.playstation.com/en-au/games/bravo-team-ps4

Damsel is a wonderful little 2D run and gun title from Screwtape Studios. The aim of the game is to complete the given objectives of each level, this may be saving all the hostages, killing all the vampires or collecting all the fragments. Levels are fairly quick and it all sounds simple enough, but the real hook is completing each level with the highest possible score. This involves increasing your multiplier by collecting fragments (which instantly start cooling down) and making few mistakes with the goal of getting that ‘perfect’ run. As the main protagonist, you’ll be double jumping, air dashing and mowing down enemies, often in mid-air!

The game’s pace changes up when it drops you into a small mini-game in order to do things like freeing hostages or defusing bombs, this involves timing a button press to successfully complete said objective. I have a few run-throughs of the demo that was on show and with each attempt, my scores got better and better, as well as my enjoyment of the game! As my familiarity with the dynamics of the game grew, my confidence to attempt more risky moves also increased which sometimes resulted in instant death but also better scores! You can check this game out a little more by hitting up their website here: http://www.damselgame.net .

Everyone loves a quick and enjoyable battle of the thanks game right? Well, Panda Arcade has you covered and on the showroom floor at PAX AUS this year I got some hands-on time with this cute little title. The concept is as simple as it comes, pick and build your tank, team up or go solo and blast your opponents away! Each tank can have its own special abilities and super shots and the demo on show pitted me against another local attendee where we battled it out over a domination ‘hold the objective’ style match.

The controls were tight and responsive and all shots (including your special abilities) required a level of skill and timing to pull off. This essentially means that all your victories will be well earned and actually requires you to outplay your foe. Coming soon will be a single player campaign as well as online multiplayer and is the perfect title to play in between work or whilst on public transport. You can find more info about this little title here – http://www.pandaarcade.com/app/pico-tanks .

I briefly covered this title earlier in the year when it was on show at RTX Sydney. In that time they’ve added more levels (a significant amount) as well as tweaking and polishing the games overall appearance. For those who’ve missed it, Brief battles is a four player free for all party game. Each player contests for item power-ups in the form of briefs which assists them in trying to score the most points after a set number of rounds. However, even without a special power-up you can still butt slam your friends to death whilst using an assortment of evading movements (double jumping, super jumps, wall-climbing and dashing) to out-wit and out-play your opponents. Similar to many party style games the gameplay is fast and relative and the rounds are fairly short. The power-up boxes come in three flavours, one which guarantee’s a power-up, one which guarantee’s a health perk and one that’s a 50/50 whether or not you get a power up or power down item.

Like most party games that have come before it, the ‘pick up and play’ rule has been implemented well and it’s an easy title to pull out when you have a group of friends over for some instant fun. The best news is that this title is nearing completion and we should see its final release very soon on PC and Xbox One! Make sure you swing by their website for more information as it comes – https://briefbattles.com

Like I needed another reason to love my VR setup even more. From Growl Interactive, Virtually Impossible is a VR party game which gives each player a random series of challenging mini-games that, as the name implies, are virtually impossible! This could be trying to catch a fly with chopsticks, dodge cows falling from a UFO, flip a bottle of water onto a moving table or my personal favourite … trying to fill up shot glasses with a bottle of alcohol with hooks for hands.

It’s short, it’s sweet and it’s a wonderful title to play (and compete) amongst your buddies for a games day! The best news is that it’s available on Steam right now! So what are you waiting for? Go here – http://store.steampowered.com/app/621780/Virtually_Impossible and pick yourself up a copy and get cracking!

Well, we covered this from PAX AUS 2016 and one year later we’re going to cover it again. Why? Because we love this concept so much! In line with its title (a not so subtle dig at America’s love affair with guns), The American Dream is about doing everything from eating, flipping burgers, making donuts and answering quiz’s with handguns! The entire game is literally on rails so you can play this one sitting down in the comfort of your chair, all you need to do aim, shoot and reload your guns in order to complete the objectives given to you. This all sounds simple in concept but not when you’re trying to keep track of multiple things going on all at once. The new demo showcased its wonderful rework of the visuals, which are looking a lot more crisp then they were a year ago as well as a new stage in the demo. This particular stage had you flipping burgers at a burger joint by shooting the grill, meat patty’s and conveyer belt to successfully get the burgers out the door.

This is going to be a day one buy from this writer for sure, it’s already caused much laughter amongst my colleagues and myself and is simply too much of a gem to pass up. The release day should be early next year according to the developer, and with the Oculus Rift + Touch Controller bundle getting a massive discount, there’s no better time to pick it up. Check out their website for more info – https://samuraipunk.com/the-american-dream .

And that wraps up yet another stellar year of Video Games at PAX AUS! It was very easy to lose yourself (and the day) jumping from game to game and it reminds me why I love covering games in the first place! Keep an eye out for these wonderful titles in the near future!