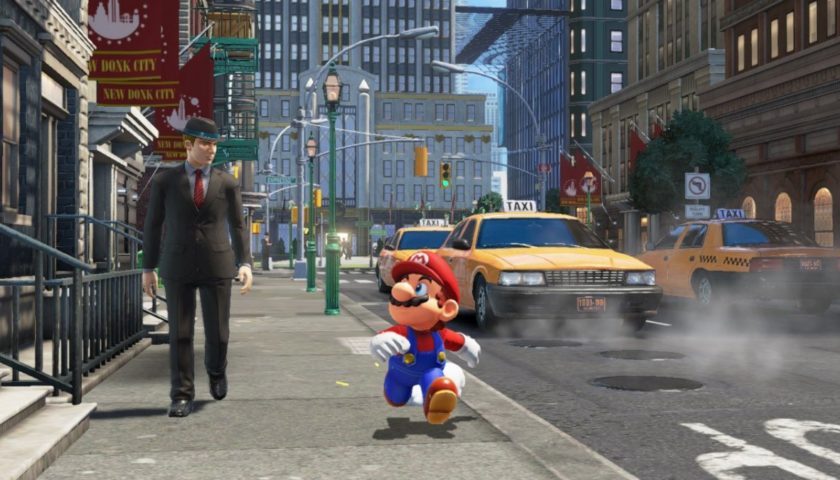 Every year at Player 2 we sit down over dinner to sort out our game of the year awards. That dinner then turns to arguing, then fighting and finally some sort of grand melee in which kitchen furniture becomes projectile weaponry. After the wounds are healed we then head back to our own corners and just write an award winner each, thus avoiding having to come to any sort of conclusion with each other. Finally it is time for the AAA releases to shine.

Maybe it’s nostalgia talking here, but as someone who generally cannot stand platformers for more than 30 minutes, Super Mario Odyssey is just so rewarding at every turn. The feel of controlling Mario across some beautifully designed worlds that feel unique in every way. The takeover mechanic feels fresh and revitalising, and goes beyond the distinct but expected look and feel of a Mario game. Exploration feels rewarded in the most satisfying of ways and is done so with an almost reckless abandon. If you find a hidden platform, chances are there is something there for you to find, and all of it feels great. Super Mario Odyssey is nothing short of distilled joy, and an absolute pleasure of a game.

So, yeah, Uncharted: Lost Legacy released in August of this year and it was not only an excellent game in its own right, but it went a long way to filling the Nathan Drake-shaped hole in my heart. Let’s hope this is a trend that Naughty Dog keeps up.

Bit of a tricky year for me, I only played two games this year, Xcom 2: War of the chosen, and Total War: Warhammer 2, both of which are excellent.

I think if the Mortal Empires patch hadn’t of been released, I would have had to go with the Xcom 2 DLC as the best. But with the ME patch, players are able to combine the map of TW Warhammer 1 and 2 together into one massive map of death and glory. That’s not to say that the Xcom 2: War of the Chosen wasn’t good. It’s flipping amazing. Go play both. Now.

Best AAA has to be one of the hardest calls to make in 2017, given what a banner year it has been for top-tier experiences. However, I haven’t had the time to spend with as many of these titles as I’d like and won’t likely finish some of them until well into 2018. With that said, one title stood out for me: Yakuza 0. A distillation of everything I love about the Yakuza series, it’s also the best title to jump into for newcomers. Hopefully, my glowing two-part review can convince you to give this a shot if it slipped under your radar.

We all knew this game was going to be absolutely baller when it came out. It’s graphically amazing, the story is driven and encapsulating and the main character is a BAD ASS FEMALE. When the Manchild who lives in my house played this, one of the first things he said was that little girls have to play games like this (you know, eventually) because Aloy is the kind of really empowering female who is equal parts kind, smart and TAKES.NO.SHIT. Horizon Zero Dawn went that extra mile to make their female character one that resonates in your mind and that’s why it’s my best game in 2017.

Dylan Burns – The Legend of Zelda: Breath of the Wild

I recall texting a fellow writer about Zelda close to its release. He was lucky enough to be within Nintendo’s largesse and received an early copy of the game, while I was not and had to make do with the newly release Horizon: Zero Dawn, which I was loving at the time. I remember saying to him that Zelda would have to really be something to impress me more than Horizon. Fast forward the months and Zelda stands tall above Horizon in my memory. It is such an incredible game that I’m certain the open world genre itself has been permanently influenced for the better by its existence. If I have any complaint, it’s that the story was disappointing, with no option to continue in the world after you defeat Calamity Ganon. Otherwise, everything else is just so exquisite. No other game tickles and then rewards your curiosity like this (no, not even Mario Odyssey). I played around 50 hours of BotW on the Wii U and then when I bought my Switch I got sucked in all over again. A true masterpiece and a must play for every gamer.

Honestly, I don’t think storytelling has ever been done better in an FPS than it has with Machine Game’s latest triumph. The gameplay is great but it is the story that really steals the show for me. From the constant twists and turns to the interactions with B J’s old man, every story beat had me wholly invested. It made me feel sad, uncomfortable, happy and proud all in a 10-hour adventure chock full of Nazi-stomping goodness. The New Colossus really is an exceptional piece of work and one I can see staying with me for years to come.

I am a huge South Park fan and was delighted by The Stick of Truth when it came out, so naturally, I was pretty excited after the sequel was announced. I got some hands-on with The Fractured But Whole at E3 this year and it was the most hilariously offensive thing I’ve ever played; lampooning the current boom in all things Superhero-related. The full game itself did not disappoint either, effectively being a 20-hour long episode of the show and packed to the brim with in-jokes, references and trademark South Park humour. Even when I had other games to review, I still found myself heading back on down to South Park to meet some friends of mine.

Let me be very real with you. It’s rare I’ll continue playing a game after I review it; there are a number of reasons, like having an insanely large pile of shame, gearing up for the next review or generally not having the time. It’s even rarer that I’ll get a game that I won’t review and finish it entirely wanting more.

Samus Returns was that game for me this year. Being a big fan of the Metroid series, this remake and 3DS adaption was incredibly faithful to the originals and made me forget about my responsibilities in life every time I sat down to bust out some hours. I enjoyed every facet of this title … except for that machine boss battle … that was crap.

It’s been an interesting year for me, there’ve been a great number of games that I anticipated greatly that life (namely my wedding) didn’t allow me to get to, however I did thankfully have the opportunity to dive into Guerrilla Games’ Horizon Zero Dawn, and it’s still by far and away the game I enjoyed the most this year. Stunning world design, a riveting cast of characters and narrative, deep mechanics and a masterfully designed open world elevated Horizon and Guerrilla into the uppermost realms of the industry. It’s an experience I’ll be holding onto dearly from 2017

Sarah Ellen – The Legend of Zelda: Breath of the Wild

When I was fifteen I thought that Ocarina of Time was the most amazing open-world adventure that I had ever experienced in the Legend of Zelda franchise. But as time went on and MMORPGs started to populate the market, Zelda games felt incredibly linear and very small. I started to lose that feeling of wonder that I had in my youth.  Breath Of The Wild has been the game that has reignited my love for the series and I will be playing it well into 2018 (hooray for DLC!).