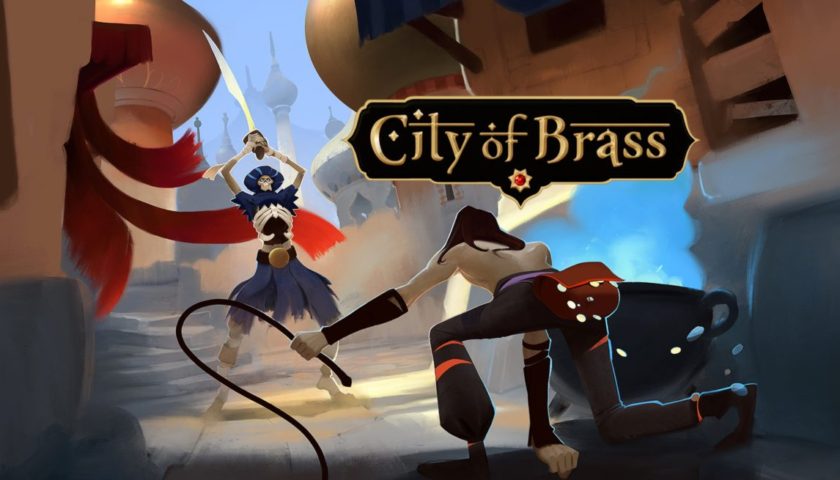 From the Senior Developers that brought us BioShock (Uppercut Games), City of Brass has you plundering your way through an Arabian Nights-themed world in this rogue-like title. With the aid of your sword and trusty whip, which would get the Indiana Jones nod of approval, you’ll be hacking and slashing an assortment of dangerous enemies that stand between you and your riches.

That opening paragraph is about as close as you’ll get in regards to having a detailed and coherent story or motivation. Indeed, the true hook of this game, like many rouge titles, is the run! Get as far as you can and grab everything in sight before dying a horrible death. Like other games in this genre, each level is procedurally generated, so instead of memorising every corner and ‘gotcha’ the game can throw at you, you’ll instead have to pay attention to enemy attack patterns, visual cues, traps and simply being generally better at the game. Straight up, one of the nicest things about this game is how its levels legitimately feel like they’re actually designed. More often than not, games of this nature fall victim to the random generator demons and deliver designs which feel unnatural and become a disjointed mess. During my many playthroughs, I never got this feeling and it kept me in the game blissfully unaware that the stage was actually a mash of random ones and zeroes decided when I hit the start button.

Make no mistake about this game though, it’s incredibly challenging and literally, everything is out to kill you. Apart from the enemies you’ll face you’ll also have to contend with trap doors, head statues spitting poison darts, exploding jars and as a final ‘F U’ the developers also threw in fake chests which can bring you within an inch of your life. You’re initially only given four hearts of health and replenishing them is far and few between, your game can go from great to hot-mess in the briefest of moments.

It’s here where the games faults begin to become readily apparent though. Combat is fairly straightforward and rudimentary, right hand is your sword for all your cutting/stabbing needs, and in your left hand is a whip which allows you to trigger traps, stun enemies or grabbing them and pulling them towards you. My biggest pet peeve of this title is when you use this grabbing mechanic to drag a bad guy towards you, if done at a long enough range, will drag them just outside the swinging range of your sword. So often my sword would whiff, giving the enemy enough time to counter and take away one of my valuable hearts. You can definitely train yourself to look out for this but when things get hectic, all it takes is a tiny second to make such a mistake. This game was reviewed on the PS4 and after many playthroughs, I could definitely say that a keyboard and mouse would easily be the more preferred manner. Aiming is fairly precise and even when you’re playing with the utmost patience and care in each room, at times you’ll need to react quickly, it’s at this point where hitting in just the right spot results in success or death and sadly controllers just don’t cut it in this scenario.

With each run, you’ll be rewarded with new items and power-ups as you progress through each level. These are very much RNG in nature but unlike other titles in this genre, like Binding of Isaac or Enter the Gungeon, the items don’t feel like they’re adding too much to the game. Some less so than others, such as the armour the freezes an attacking enemy after they land a hit on you or a new sword that’s actually a fire torch that sets your enemies on fire. Most of the other gear you’ll encounter however tend to have a subtler effect, to the point where you wonder if they’re actually doing anything at all. The more obvious way to alter your experience is to utilise the modifiers at the start which can drastically make the game easier to play. Be it more hearts, cheaper items or a range of other options, and if you’re a sucker for punishment you can go completely the other way and make the game even harder than it is on its normal level!

City of Brass definitely has its issues, visually it looks fine but its problems are very much skin deep. There’s been a great deal of effort with the level design algorithm with a focus on memories enemy types and their attack patterns, and for those reasons, the developers should be applauded for doing a great job. But there just isn’t enough here to keep someone coming back, with some of the more successful titles in this genre, the random power-ups can really make or break a run, but they truly change how you play the game. Even with the beginning modifiers turned on and obtaining many new power-ups in the stores, I never truly felt that I was playing it any different to when I didn’t have any of them.

On the upside, there is definitely an intrinsic reward from learning how to best tackle certain enemies or using the environmental traps against them, the kind reward that you only get from experience and slowly figuring the game out. On this point, there is gameplay here to like, especially if you enjoy a challenge. But even with this knowledge, it would be hard for me to recommend this game to someone without first suggesting other more accomplished titles in the genre. City of Brass is definitely a game to jump into for a quick run here and there and perhaps that’s all its trying to be, it just would’ve been nice to have a bit more going on.