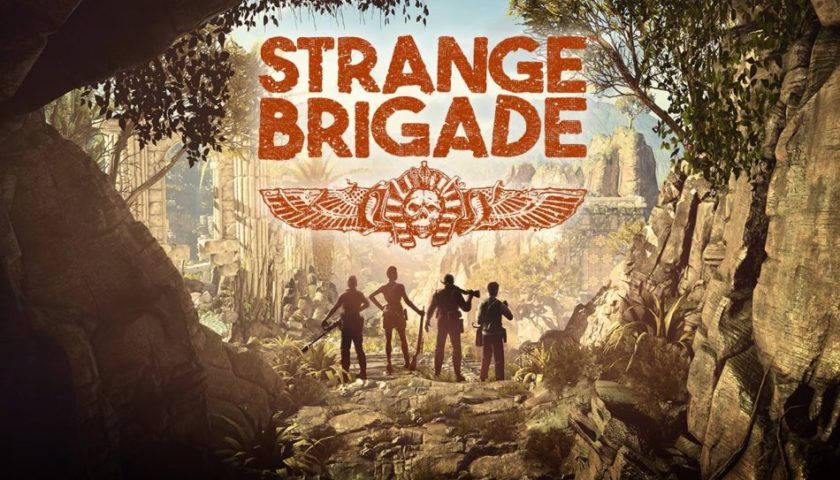 Our heroes, who look the 1930’s adventure part, assemble on their air blimp and enjoy a bit of friendly banter. Pop on some earl grey, old chap, we’re hunting mummies!

There’s a lot to like about Strange Brigade. For one, it nails the Indiana Jones-y adventure vibe perfectly. This comes down mostly to the fourth-wall breaking narrator, an English chap with a quip for nearly everything you do. Pause the game and he’ll come out with, “Someone at the door, eh? It’s all right, I’ll wait.” or, “I’ll take mine with two sugars, please.” He also chats to you throughout the game’s meaty campaign, making light of new enemy types or expressing glee whenever you seem stymied. Although he seems to revel in your misfortune, he’s also the first to cheer your victory, acting as if he never doubted you in the first place.

Elsewhere, Strange Brigade continues to impress. The campaign levels are sprawling, lengthy affairs full of twisting side paths that lead to secret doors, puzzles and extra loot chests that go towards your cash total for unlocking new firearms. Throw in gun upgrades in the form of magic stones that enhance your weapons in various ways (my favourite is the one that can freeze enemies for a short while) and you have enough depth to justify Strange Brigade simply as a single player experience (with optional co-op?). I managed to shoot all of the secret blue cats in one level (think the blue medallions in RE4) and the room that opened up for me was well worth the effort, packed with gold and collectables galore.

Resident Evil 4’s DNA can be felt throughout the experience, specifically in Horde and Score Attack modes, which both feel extremely reminiscent of the masterful Mercenaries levels. Strange Brigade offers its own flavour, though, with Horde mode a lengthy game of herding increasingly difficult enemy types around a growing map (areas unlock as you complete waves), taking advantage of single-use traps and optional doors that cost money earned by killing monsters. Need ammo? Well, the chest gives you four free refills before costing $3 000 to refill it with another four ammo boxes. The good thing about Horde mode is you can leave it and resume your game at whichever level you quit or failed at. This mode feels perfectly enjoyable solo, but I can imagine (and hope) that things will get far more chaotic and exciting when playing with 2-4 players.

Score Attack injects a little bit of The Club into proceedings, offering a linear run from A to B, with hundreds of spawning enemies in between. You score extra points for multipliers and multi-kills and there are bonuses for using all of the traps or not getting hit once. I took a few runs at one level and even with the game only in reviewers’ hands worldwide, I only managed 8th spot. I can see some deadset insane score being posted in the days and weeks to come.

Strange Brigade never quite feels AAA, yet there’s a sense of determination and love in everything, of pushing the smaller budget to its very edges. Graphically, levels are full of colour and texture, with atmospheric lighting. Monster animations are fairly limited but this just adds to the schlocky vibe of the whole thing. My only real criticisms relate to the aiming and the lack of any difference between the characters. When I first saw footage of Strange Brigade, what stood out was the inclusion of a native woman, Nalangu Rushida. Her traditional dress and body paint is striking and certainly not the usual for playable characters in co-op shooters. I wondered what “class” she would play, perhaps she would eschew guns altogether for a more traditional alternative. Alas, I discovered early on that the characters of Strange Brigade are only skin deep, as you can choose any of the guns or grenades to start with, using any character. In fact, the only difference between them is their special move, which all have a different animation but act as an almost identical area-of-effect super. And while I can appreciate the use of real, historical weapons, I can’t help but feel an opportunity was lost to go a bit wackier with the load outs, to further embrace the silly and offer some truly unique firepower so that each character complimented the others. Obviously, time and money were a constraint in this department.

My second concern, the aiming, mostly concerns the lack of soft auto aim on consoles. While mouse payers will no doubt have their wrists fine-tuned in no time, the slightly fiddly nature of some of Strange Brigade’s shooting puzzles had me quite frustrated with aiming that never felt right no matter how much I played with the settings. A slight snap to targets, such as the glowing orbs that activate traps, would have made things feel much smoother. There is also an enemy that appears later in the game that has small glowing parts on its body that must be shot many times to defeat it. Whenever they appeared I just groaned because defeating them under the game’s inaccurate aiming became total pot luck. Not even shotgun blasts would register sometimes. My only options were explosives and special moves and even then I had a few times where I just had to reset and try/hope again.

All things considered, though, I’ve had a blast with Strange Brigade in single player. There’s just enough hook to keep you replaying levels for the secrets and puzzles you missed, and while the campaign tends to repeat notes across different scales, the act of killing nasty monsters never gets old. If you’ve pined for more Mercenaries modes these past few years, this will well and truly scratch that itch and I can only imagine it will be more exciting with the addition of extra human players. I intend to keep playing across launch week and will report back with my findings. Now, if you’ll excuse me, I’ve got blue cats to find and shoot.