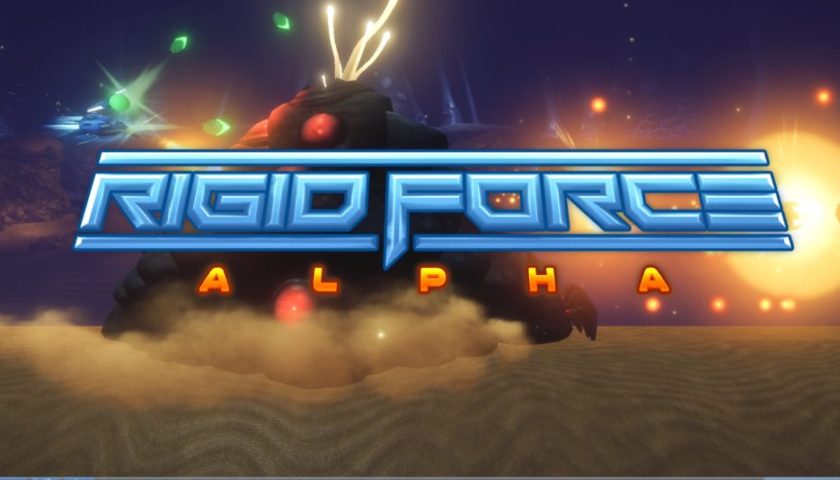 Rigid Force Alpha is a shoot-em-up brought to us from the team at Com8Com1 that tasks the player with, well I’m not too sure, to be honest apart from blowing up a hell of a lot of enemies in a gunship that can feel both vastly overpowered and incredibly weak depending on your situation.  Taking control of the ship the game is named for, you will find yourself facing off against hordes of enemies and environmental challenges in an attempt to find out what is causing everything to go everything to go haywire.

Rigid Force Alpha is a 3D side-scrolling shooter in the vain of the Gradius series, where you must fight your way through hundreds of enemies consisting of ships, robots and living creatures, through six different levels that each have their own different challenges to overcome.  As you take out enemies you will find power-ups that will enhance your weapon type, as well as Force Shards.  The Force Shards are adjustable attachments to your ship that allow you to switch fire between four different angles, concentrating all of your fire into a narrow area for faster damage, or a more open area to lay down larger waves of fire to overwhelm multiple enemies.  Interestingly, both of these settings can be used to fire either forward or backward, and there are some moments during the game that force you to make use of this skill in order to avoid becoming completely overwhelmed.

On top of the hordes of enemies being thrown at you, you will also have to contend with environmental challenges.  Whether it is shooting asteroids into ever smaller pieces so you can get through, avoiding parts of space stations or even avoiding falling stalactites in an underground cavern, there are myriad opportunities to fall afoul of the environment if you are not paying attention to how/where you are flying. Each level culminates in a boss fight, and while some of them can be challenging, they are really just watching for the pattern and dodging all the enemy fire until you get your opening to attack.  Rigid Force Alpha really does get overwhelming both in the missions and the boss fights, and a moment’s inattention can lead to disaster.  Once you die you lose all your offensive upgrades, and that is what brings on the biggest problem I have with the game.

As mentioned above you make use of Force Shards to boost your offensive capabilities and allow greater fields of fire.  Combine four of these with the regular weapon power-ups you find and you have yourself a very destructive little ship that will quite literally obliterate almost anything in your way.  Most of the time when I just kept that fire button held down and focussed on maneuvering the ship around.  When I would eventually take just one shot too many (and I still don’t know how it is worked out as there is no visible indicator on the screen) the ship would be destroyed and all of those offensive capabilities would be gone, unless you happen to be playing the game on easy.  “Well, you will just have to earn them again” I hear you say.  Well, that would be great, except for the fact that most of the time once I lost that first life and lost those upgrades I would lose all my other lives very soon after.  There is such a large shift in difficulty between stock fighter and the veritable arsenal that you acquire that once you are past the first level if you lose a life it is a real challenge to get yourself back in the game.

At the time of writing there has yet to be a score posted on the leaderboard for the hard difficulty, and while the difficulty of the game will be a bit of an issue to some, I do enjoy playing it.  The fast-paced action is paired with a wonderful synth soundtrack that just feels right when you are playing it, and there is something quite cathartic in just swooping around the screen with blasters firing to the score that Com8Com1 has used in the game.  Once you have finished the ‘Main Mission’ then there is replayability in both an arcade and boss run mode, where you can attempt to get yourself on top of the leaderboard through sheer skill and determination.

Overall, Rigid Force Alpha is a neat little game.  Casual players might find the difficulty a little too daunting, but fans of the genre will be able to spend some quality time destroying what seems to be an almost endless wave of enemies as they fly and dodge through the different environments.