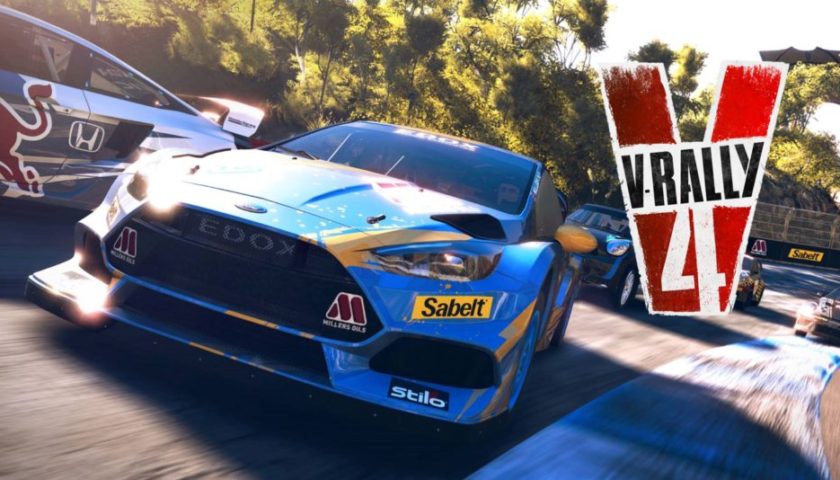 V-Rally 4 – Stalled at the Starting Line

Not since 2002’s V-Rally 3 has there been a new V-Rally game, the classic rally racing series started by Infogrames in 1997. But as is the popular thing these days, developers of the WRC games Kylotonn Racing have reopened the old garage, stocked it full of new cars, race modes and brand new locations and brought V-Rally 4 to the service area to hit the open dirt roads once again. And while they manage to hit some of the notes that made the V-Rally game’s what they were–lush, varied environments and a burgeoning roster of licenced cars–there are also a few shortcomings. Flat, drab visuals and an overly twitchy and inconsistent driving model let down the experience as a whole, and while an ambitious career mode tries hard to do something different, it can’t overcome the game’s core issues making V-Rally 4 more disappointing than not.

The first thing V-Rally 4 does is put you directly behind the wheel of one of its many 4WD beasts to give you a feel of its driving physics, and the first impressions aren’t at all good. Washed out lighting and flickering textures greet your first moments in the car, while the driving controls have all the subtlety of a sledgehammer; it feels just horrible. It’s almost impossible to correct your course with light touches of the thumbstick without having to get into the menus and edit the default steering sensitivity. Trying to counter-steer results in a wild fish-tailing that was even too much for this experienced sim racer to get to grips with.

The other vehicle types aren’t much of an improvement either. Of the 50 or so licenced cars available in the game, only the 2WD cars offer anything close to something joyful to drive. On dirt, the back end will glide elegantly around a bend with a touch of the handbrake, while on tarmac the screaming rubber slips and then grabs the road, gripping perfectly until you dip a tyre off into the dirt. There were moments of genuine enjoyment, but any fervour that was built up by those was immediately swept away under a cloud of dust as soon as I tried any of the other models. Extreme-Khana cars–ultra-high powered 4WD’s designed for precision driving–feel uncontrollable at the best of times, even with all of the game’s traction control and anti-lock brake assists turned on. Turning them off makes things even worse, with the car almost deliberately trying to kill you at the slightest touch of the controls.

There are several different game modes, including Quick Race and Multiplayer, all introduced to you through a devastatingly bad voice over whose delivery reeks of disinterest. In the game’s main mode, called V-Rally Mode, you embark on a structured career through the various disciplines of rally. You’ll start off in the slower cars and eventually, as you score high finishing positions and earn more money, you’ll make your way into the higher-powered cars. Different disciplines range from the classic point-to-point Rally to Hillclimb with super-fast cars purpose-built for tackling the tight, steep mountain roads. Though while all the different disciplines offer something different in terms of the cars to drive and the environments you’ll see, the poor car handling across the board means that none of that really matters.

Career progression comes in the form of earning money for finishing events in a good position, which lets you purchase new cars and build up your team. V-Rally 4 contains some light team management, letting you hire researchers, engineers and an agent to help manage your everything from the types of events you’re offered to enter, to researching new performance parts you can attach to your car. Each new person you hire to the team has certain salary expectations, and at the end of each in-game week, you’ll pay out the total of your salary bill from your overall bank balance. Developers Kylotonn has a habit of putting interesting career modes into their recent racing games, and this one is no different. It’s hard not to appreciate that they’re trying something new, but despite their intriguing take on a now tired racing game trope, it’s not enough to help get past the game’s obvious shortcomings.

If there’s one area where it feels as though the spirit of V-Rally has been properly captured in V-Rally 4, it’s in the racing environments, with V-Rally 4 boasting some of the most visually interesting rally tracks I’ve experienced in some time. Most locales have a nice variety of surfaces, lots of types of foliage and some nice open areas with which give you a little more breathing space, as well as a number of different conditions to tackle each stage in. Twisty, dirt roads lined with sharp rocks and cliff faces snake their way downhill before opening up into a wide open, sandy beach. In the right car, the feel of the grip change when moving between surfaces is great. The sense of variety ties in perfectly with my memories of the original V-Rally, which also made use of wide-open spaces and some very distinct looking locations.

There’s one overall question about V-Rally 4 that’s bugging me–why? V-Rally was a great series for its time, but looking back on it there’s no one really defining characteristic that’s quintessentially ‘V-Rally’. Sure, they had some interestingly varied environments and a few licenced cars; at the time that was enough to stand out. But 2018’s V-Rally 4 feels like it’s missing an identity; a marquee feature to make it stand out from Kylotonn’s other rally titles, and Codemasters excellent DiRT games. Though considering its absolutely abysmal car handling, even the strongest identity couldn’t save you from the disappointment that is V-Rally 4.