The Dark Room Unleashed on PC

The Dark Room Unleashed on PC

FINDING oneself in a non-photography related dark room can be unsettling, to say the least. How did I get here? Why is it dark? Where’s the light switch? What was that I felt brushing against my leg?

Anyone who grew up playing old computer adventure games in the 1980s knows those tropes very well, and they’re key parts of Australian-born comedian John Robertson’s gaming stand-up comedy show The Dark Room, which has been touring gigs and festivals around the world since 2012.

John said, in a nutshell, the Dark Room show was “a gaming stand-up show that fuses the horrors of 1980s text adventures with extreme verbal abuse”.

“Everyone’s name is Darren, and they compete for freedom, and a pineapple that we call the ‘Flamboyant Potato’,” he said.

“I’ve been touring it around the world since 2012, and it’s amazing the effect it has on people. Do it for twenty people, it’s a party, do it for 2,000 – it’s genuinely a rock concert. A weird one, but that’s kinda the point.”

While the live show and YouTube videos, both featuring a sadistic quasi-dungeon master/narrator (for want of a better term) known as The Guardian are cult hits, turning The Dark Room into an actual computer game seemed like a logical next step and one that has been undertaken in conjunction with Stirfire Studios, with The Dark Room launching into early access on Steam recently.

John said he wanted to turn the show into an actual game for two reasons: Money, and really wanting to expand the story.

“The live show has a story hidden under the jokes and the puzzles. If the crowd don’t find it, they get tortured (they seem to like that – the sickos.) So this was a chance to hide a really big bloody narrative underneath 1980s game design – every aspect of the game actively wants you to die, and won’t lead you to what you need – so folks have to dig to find the truth,” he said.

“Also, since folks love getting involved in the live show, it was a natural fit to become a game you can play with your friends. Booze helps – or imagination will do if you don’t want to throw up during it.”

Turning a live-action show into a computer game did require a change of approach, John said.

“The show is very much me improvising around the people there – along with the set map we use,” he said.

“The difference with the game is the cruelty has increased, the story reveals more secrets, and the map is much, much bigger. And the statements The Guardian makes in the game get to stay forever, so there’s stuff in there about Americans and their guns and so on.”

As to the actual technical stuff, John said: “a team of very, very hard-working programmers, mo-cap experts and an excellent artist did all the heavy lifting”.

“I sat down in a room (dark, predictably) for two weeks and thrashed out a colossal script. Two narrative designers helped with the edit. Then I flew to Australia for a week of motion capture so physically strenuous it tore my stomach apart. I’ve got surgery scheduled – thank Christ I don’t live the in the US, or this would be like a game version of Breaking Bad – ‘Gotta pay them bills, quick, release some DLC’.

“Now we’re in Early Access, the team at Stirfire are still working hard to put the other levels of the game together, and I contribute ideas like, “Make this bit meaner” and “I’ve found a glitch where after the puppy dies it comes back to life, please fix this so it stays dead.”

John said when the game hit early access he was looking forward to it being released and seeing reactions to it, but he is pleased with how things have gone so far.

“Now that we’re there (early access release), it’s working as I wanted – solo players become addicted to escaping our very hard deathtraps, and parties of people get together and enjoy dying! Watching folks stream it is a really lovely, too,” he said.

“We’ve made something I’m proud of, and I’m looking forward to what happens to people when they realise how deep the adventure really is in my silly little game,” he said.

Having played the early access version, it definitely appealed to my warped sense of humour and did a great job playing with 80s adventure game tropes, as well as developing ever-more humorously bizarre situations that included establishing if Darren’s pockets really were made in the Czech Republic, making an impromptu meal from cheese, lint, and leather gloves and dying horribly after inadvertently crying tears of despairs onto a light switch and getting electrocuted.

I haven’t seen anything quite like The Dark Room before and if you have a warped sense of humour (and I certainly do) then this is well worth checking out – just don’t play it without headphones or where any kids you may have nearby can hear it. 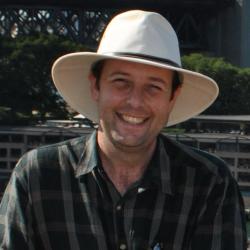 With more than 20 years experience as a games reviewer, feature writer and journalist, including at actual newspapers in New Zealand and Australia, Royce somehow combines his love of all things gaming and tech with a strong interest in history. It’s an odd combination, admittedly, but it works. Primarily a PC gamer - as a gaming rig complements his study with its many leather-bound books and smell of rich mahogany – he leans towards strategy titles, strong narrative games, the quirky or unusual, and likes the peripherals/accessories side of things too.
All Posts