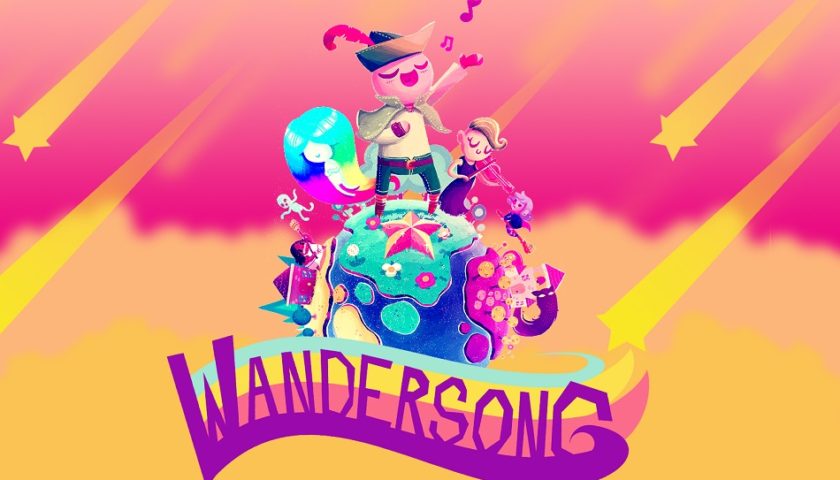 Wandersong – A Song of Wonder and Hope

Singing a beautiful song of hope, heroism and friendship, the musical 2D platform-puzzler Wandersong is an indie gem you’ll remember long after the final note has been played.

Playing as an unassuming bard, you begin Wandersong with an ominous warning that the universe is ending. Summoned in a dream by a goddess, your bard quickly learns he is not capable of wielding the heroic sword required to save the world. This theme of what defines a hero continues throughout Wandersong, with the bard regularly told he doesn’t have what it takes to be a hero, and is an average person not capable of amounting to anything of worth.

However, he can and will sing at any opportunity. Which is handy, considering the bard discovers that learning and performing the fabled Earthsong may yet save the universe. Cue finding the seven Overseers who each know a separate part of the musical composition!

Singing forms the core of Wandersong’s interactions with its vibrant, colourful world. Controlled by a pop-up radial using the right-stick, you can sing various notes which each correspond with a different colour. Seeing and hearing the many ways your bard’s voice affects the game is delightful; inanimate objects bop along to the rhythm of the music, and some objects change colour according to what note you belt out.

Wandersong brilliantly innovates on this singing concept throughout its 12-hour duration, cleverly introducing fresh new ways of solving puzzles on a regular basis. Early on, you encounter a bird singing a tune, signified by an audio cue alongside the corresponding colour sequence. By singing the same tune back to the aviary companion, it will boost you up to a previously unscalable ledge nearby. Future puzzles increase in complexity, but to elaborate further would spoil the awesome sense of discovery Wandersong excels in. In addition to varying levels of puzzles and problem solving using the power of song, dialogue choices are also made using the singing radial – it’s adorably funny singing your responses to characters, many of whom comment on the bard’s propensity for singing all the time.

Lively characters populate the often-goofy world of Wandersong, with each area you visit punctuated by its unique inhabitants. These characters serve as much more than plot and quest MacGuffins, which each one voicing their individual hopes and fears in light of the impending end of the universe. Many of the character interactions are completely optional, but to blitz through focusing on the bare minimum would be missing out on Wandersong’s best parts. I spoke (sang) to every character I could, eager to absorb more of their area’s culture, and gleefully giggling at witty punchlines to jokes I didn’t know were coming. Sailing with a group of pirates whose primary import is coffee beans leads to the bard’s first caffeine-induced experience, which is an absolute hoot.

Along the way, the bard teams up with a witch by the name of Miriam. The duo are polar opposites: the bard radiating positivity and hope, whereas the grouchy pessimist Miriam routinely grumbles about the hardships they encounter. Although the conflict between the two generates plenty of humour, it’s the touching character development they experience along the way that solidifies them as genuinely great characters. During Wandersong, they open up about their insecurities about not fitting in and support one another, humanising their otherwise fantastical journey to a delicately relatable level.

Accentuated by extremely cute and positive writing, Wandersong is such a pleasant world to exist in and simply be, soaking in the positive vibes and love shown between the many characters. Early on, a character asks the bard how old they are, which results in a full wheel of awkward, non-committal responses, but the character responds by saying they are young at heart, making everything around them better. So wholesome!

While there have been several big games recently which look breathtaking in screenshots, such as Forza Horizon 4, Wandersong is an example that looks stunning in motion. Using a mishmash of 2D styles similar to diorama stylings of Paper Mario and the minimalist shape-based design of Night in the Woods, Wandersong’s vibrant locales really pop with a gorgeous palette of bright pastel colours. As mentioned earlier, the way the environments dynamically interact with the bard’s singing breathes life into everything you encounter.

Considering Wandersong is about the power of music, creative expression, and performing regardless of ability, you’d think the music would be pretty good?

Composed by A Shell in the Pit – the musical mind behind two of my favourite indies, Rogue Legacy and Full Metal Furies – Wandersong is overflowing with music across all sorts of genres. Spanning lullabies, sea shanties, choral epics, and tense techno stompers, the music here masterfully weaves throughout Wandersong’s dramatic highs along with its tender character moments. In fact, the moment I file this review, I’m rewarding myself by purchasing the three-volume soundtrack, remixes and all. ‘Nuff said.

By this point, you likely get the idea I’m somewhat fond of Wandersong. And you’d be bloody right. However, what captivates me about this game isn’t just it’s lovely characters and writing, not just it’s unique puzzle-solving singing mechanics, and it’s not even its wonderfully eclectic soundtrack from one of my favourite composers.

What does keep me thinking about Wandersong is how it continually surprises throughout its entirety; the bard’s voice is always used in innovative and interesting ways, the depth of its characters goes far beyond their two-dimensional appearance, and the narrative took me to many unexpected places. Each time I was about to settle into a comfortable rhythm, Wandersong dazzled with a genius new puzzle design or blindsided me with an unexpected emotional gut-punch of a plot beat. Additionally, for those who stick around beyond the final credits, there are some lovely development easter eggs well worth your time.