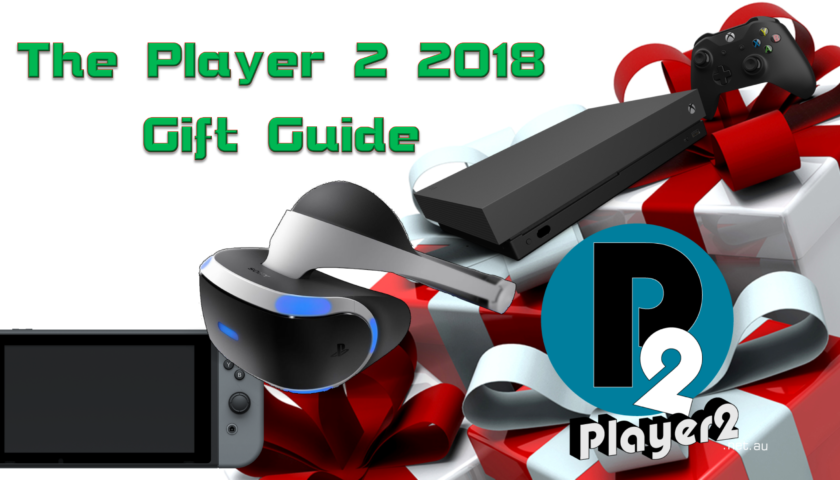 It is that time of year, so the P2 team thought they would help out with the Christmas shopping and give you some options for your games loving loved ones. These choices may be just the perfect thing to put under your tree, or they may just say weird things about our writers. Either way, there is something for everyone to enjoy.

My son and I have been hanging for the new Super Smash Brothers game, which will be released in a week, and definitely is on our mutual Christmas list. But to play this game properly, the right tool is needed. In my mind, there is only one acceptable tool – the OG controller for the Nintendo Gamecube. In purple, of course. There is no other acceptable option.

I have been enjoying Tetris Effect over the past week, and it has been an absolute joy. However, I do not think I have been getting the maximum impact of this game. Getting the VR experience is not feasible as the PSVR headset sits uncomfortably with my glasses. But I can attain some increased immersion with a nice pair of headphones. I am no audiophile, and most reviews point indicate decent sound on this headset. Throw in a microphone (albeit a hidden one) and wireless capability at price in the low hundreds, and this is a welcome stocking stuffer for anyone with a Playstation.

Now we are getting a bit silly. If you have been following my Twitter feed over the past year, you will know that I have fallen down an archery hole. And it is a deep, deep hole which will promptly swallow up any expendable cash – I am talking bows, arrows and all the associated accoutrements. Already having a few bows, I cannot state the hunger for more. This compact, modern-looking hunting bow has caught my eye for the moment.

What is better than opening a present? Opening lots of little presents. Blind boxes basically combine two of my favourite things, tiny cute toys and gambling. Cheap enough that you could get a whole fistful for less than $50 and with offerings from all kinds of media franchises there are options to suit all tastes and budgets.

For me, the best kind of gift is something you want but at the same time, something wouldn’t buy for yourself. For me personally, $60 or more for a bag is just not justifiable but Loungefly’s range of pop-culture themed handbags and backpacks tempt me just the same. With designs that mix geeky with grown up, I would love to be rocking one of the new Overwatch designs to the boxing day sales.

With a job and family, time for gaming can be hard to come by. All the money in the world can’t buy extra hours in the day but it could buy a personal chef, a cleaner, and a tutor for the kids, so I guess I would just settle for that.  Mr Handy fits the bill perfectly. Also, those cool attachments will be of great use when the apocalypse finally arrives.

Assuming there’s an Xbox involved, and you’re either not sure what games will be liked or don’t want to spend a lot, it’s hard to go past the Gamepass. While there’s a part of me that’s concerned for the devaluation of the individual games that comprise the pass and what that means for the longevity of the industry, I’m also aware the coins don’t go as far as they used to. My main reason for Game Pass is it gives you a chance to learn what kind of games someone might like, and if they’re new to gaming or have a limited budget, it’s a nice, commitment-free way to introduce a whole range of games. Making a pass at the Pass equals a pass mark, so don’t pass on the Pass.

I know. I know. Chances are if you’re looking at this list, wondering what we would steer you too, you’ve either been swallowed up by the inescapable song and dance around this title, or have kept clear on the reckoning this game can’t possibly be what they say. And you’re right. You’d be absolutely right about that, but not in the way that you think, cause this ain’t a game at all. Sure, as much as any world loses its lustre and mystique the closer you look at it, it can seem like a facade at times, but as much as any other offering, this ain’t a game. It’s a world. A life. A place to go and lose yourself. But maybe aside from the gold and delights you may find in its hills or plains, you may also find a measure of peace between the violence. A measure of yourself, too.

While all this focus is on Mars, nobody but nobody is paying attention to that thing we see in the sky every day. Buy the moon. Nobody will expect it. I don’t know who you buy it from, and that’s probably half the fun, but can you imagine the look… the look as you walk right up to all those Marsophiles (or whatever they are) and be outright, “That’s my moon.” It’s the fricking moon, that everyone can see. And it’ll be YOURS and you can rename it to whatever you want! Just… JUST BUY THE MOON ALREADY.

This category is quite difficult for me as I have unexplainably expensive taste. I’m certainly not rich but there’s not much I spend money on that falls under this category. I’m more like to squirrel away until I have to use it on bills or if I’m lucky, get something much larger. There’s simply not much that’s this cheap that I’d bother to want, she said waving the topic away with her diamond encrusted gloves.

That being said, if someone came to my mansion with these items, perhaps I wouldn’t send them packing.

These Overwatch Shot Glasses are super neat. I actually bought myself some the other day because I didn’t own anything small enough to drink Soju with. They’re frosted so even clear liquids don’t look too boring in them and they’re based on the original support team otherwise known as true GOATs. Better yet, when dishing out the booze, give your most hated friend Symmetra and see if they notice.

Ok so I can see your confusion but no this isn’t for my super sexy upcoming Oscar the Grouch cosplay. This shiny bin is actually the perfect device to hold all of those crappy Pop Funko vinyls people are going to get you as the geek in their life. Not only will this hold a lot of pops (even more if you melt them down first) but it’ll make a satisfying ‘CLUNK’ as you idly toss the latest one into it without getting up from your chair. Better yet your gifter may even get a look at their own stupid face in the reflection of the bin. Truly this is a multipurpose Christmas gift made to serve – make sure to give it early so your lucky someone can get the full use out of it.

GENJI SWORD. Ok if we are honest pretty much anything on the Blizzard store from the Overwatch category would do nicely. This is one of the newest and nicer things available but it does cost a pretty penny. Prove your love, buy me- I mean your chosen receiver this beautiful sword. It can also be used for cosplay so a double purpose alongside just looking super awesome in someone’s house. While you were giving inferior gifts, I studied the sword.

Money is no Object:

Ok so yeah, I’ve decided to go a little crazy but they said no object. I also did have more expensive ideas so I’m still being conservative. Yes, I know Elon Musk has been being a bit of a weirdo dick lately, and yes I know I can’t drive a car but I would very much like a Tesla for Christmas. Preferably in red. Why you ask? Shut up. That’s why. And Merry Christmas.

Nothing says Christmas like slaying hordes of hellspawn, and to undertake such an activity one needs the appropriate soundtrack. That soundtrack is Mick Gordan’s industrial metal opus, the Doom OST. Now you can get this bad boy on CD for around $30 but purists will want to go with the very sexy (and very good pressing) blood red Vinyl edition. It is $52 on Amazon at the moment but those couple of extra dollars are worth it. Rip and tear your way through your Christmas dinner with the power of Metal at your side

With so many cool soundtracks from games hitting vinyl these days you are going to need something to play them on. Enter this excellent mid-range turntable from Audio Technica. It sits comfortably in “not a piece of shit and not over-the-top” price range and provides a wonderfully clear and warm sound when playing. Being an Audio Technica, parts are easy to get too, so hunting down a replacement needle is no problem at all. Sure you really need an Amp and a good set of speakers to get the best out of this bad boy but a quality musical experience is priceless. Join me, on the Vinyl side of life and forget about Spotify forever.

Enjoy team management modes in sports games? Why not go for the real thing. Sure you could start small with an Australian AFL or League team but why not go bigger? The Chicago Cubs could probably use some new management, Real Madrid could probably benefit from some fresh blood and let’s face it,  The New York Knicks couldn’t really do much worse. So why not lash out a couple of hundred million dollars and fix all those problems that fans around the world have always known the answer to but for some reason management never has.