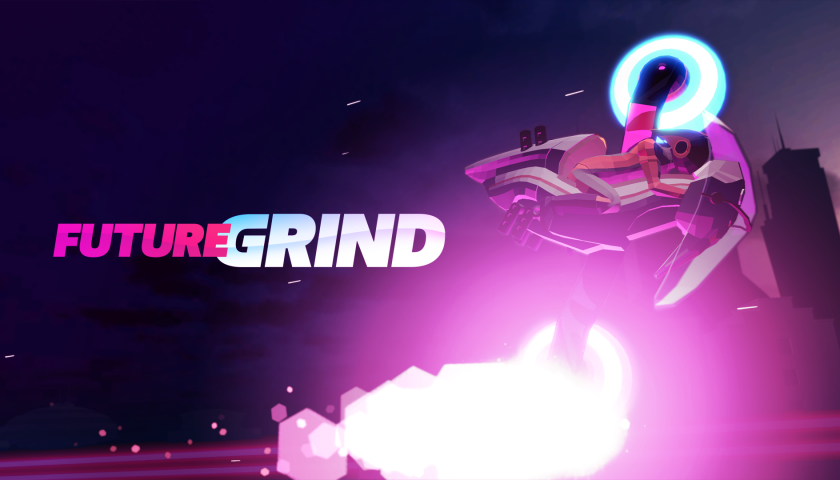 I can’t say that stunt platformers have necessarily been my thing over the journey, with the likes of Ubisoft’s Trials being the closest I’ve ever come to enjoying them, but rarely have they clicked in a way that might see me commit any more than an hour or so, and certainly not without a friend to make the experience more palatable… and then FutureGrind came into my life. FutureGrind has been one of those “coming soon” projects for several years now, before the development team at Milkbag Games suddenly dropped a Jan 22nd release date upon us; the obvious question now is… have the years in gestation been kind?

Gameplay in titles such as FutureGrind is king, and what a treat it is, to experience all of the subtle (and not so subtle) tweaks that the game throws at you. The difficulty curve is balanced superbly with new platforming factors to consider, gameplay elements and things to consider dropped upon you at a reasonable (but not too slow) pace, but the core premise is simple; get to the end of the level without blowing up. To do so you’ll be riding your very uniquely designed bikes, from the Slice to the Left Coast, the Gimbal and a small handful of others across different coloured platforms looking to bounce, hang or grind off of them on your way to the end of level’s checkered flag. The idea sounds simpler than it is to execute, of course, each platform is colour coded and if a wheel of your bike (a strangely vertically aligned bike I might add) doesn’t match the colour of the platform it’s landing on and it’s game over for you. The pairing of the old and the new systems with some creative flair works incredibly well to revitalise a formula that was perhaps beginning to stale a bit.

The gameplay loop itself is a fairly simple and repetitive one. Within each “world” that you visit you’ll have three different objectives. The first is always the same, safely reach the end of the level, but once that hurdle is overcome, a more devious duo of tasks reveal themselves. Sometimes you’re required to hang-grind for a certain distance, others demand that you to avoid platforms of a certain colour, and they’ve all been developed to fit in with the design of the core level. You’ll die often, but it’s not a concern with a nearly non-existent death penalty meaning you’re back in the fray with a click of a finger, and less than a second of downtime. The fact that death finds you so quickly is the simple product of momentum, and trying to keep up with the increasing speed and demands of the level, but with each death, your familiarity with the track solidifies. Gradually you’ll begin to develop proficiency with the particular track and with each attempt you’ll slowly inch closer to success. Inevitably, you’ll achieve that endorphin rush that only comes with the euphoria of overcoming the puzzle thrown at you. It’s an addictive loop and one that I kept craving to return to even when life was pulling me elsewhere. Points are also allocated for tricks and combos that you perform, so chasing down a high score or a new tier of trophy serves as an enticing secondary objective for any player.

If negotiating increasingly difficult and intensely fast platforming puzzles wasn’t already enough for you, there’s some clever, very cyberpunk inspired storytelling taking place in the background of each challenge. Far from necessary and still fairly basic, the story involves two warring sponsors and corporations, with the tug-of-war pulling you in the middle of it as well. Optional objectives will open up from time to time that dives a bit deeper into this story, fleshing the narrative out whilst simultaneously providing some different objectives to those you typically complete.

Whilst the core play mode provides several hours of fun, and the pursuit of high scores in those levels can add some additional time to the game clock, there is a noticeable lack of content to try in the game. Beyond the main mode, players can have a few practice runs on the variety of different bikes or explore the “Grindpedia” where they can get a quick refresher on all the fundamentals. Competing against friends in a 1v1 points shootout, or even to use their ghost to learn a few things would instantly add hours to the experience but ultimately as fun as the core game is the lack of longevity is a reasonable concern for those looking to immerse themselves further in the brilliance that Milkbag have developed.

For those looking for something a bit different from their stunt platformers, FutureGrind is for you, and if you’ve grown tired of the same old formula seen from others in the genre, FutureGrind is for you. An intriguing, but not essential plot serves as a solid base for tightly refined, highly polished gameplay systems, making FutureGrind a highly enjoyable experience, just don’t go expecting it to consume a whole lot of your time. Milkbag has made me a believer in the genre, and I’m excited to see where the studio can take this concept going forward.