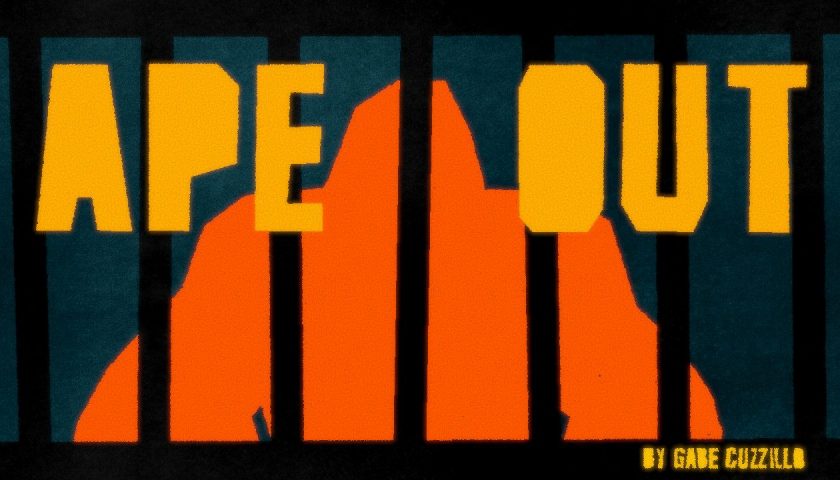 Ape Out – I Want To Break Free

Apes breaking free of the constraints enforced upon them by their human captors is not untrodden territory; a certain film franchise has seen to that over many decades now. The gaming medium had, up until 2019, failed to empower our primate pals in the same way (and no, Donkey Kong doesn’t count!) Ape Out, coming from Devolver Digital and developer Gabe Cuzzillo has corrected this wrong though, gifting gamers with one of the purest arcade experiences available in the current gaming landscape.

Currently available on PC and Switch, Ape Out is built upon a very simple premise; you are an Ape (a Gorilla to be specific), trying to get out. That motivation serves as the backbone to the whole experience, a bloody, violent, over-the-top affair that will see you, and the security guards there to detain you, die regularly. You’re dropped into the world without context and are simply expected to survive, with the thrill of the chase getting your pulse pounding through each heated pursuit.

An arcade experience through and through, Ape Out is brutal, frenetic and fast paced. The core Ape Out experience is spread across four “worlds” with 8 levels within each, and as you gradually progress, the obstacles to overcome become ever more varied and challenging. These gorillas were clearly very important for some reason because the amount of security is insane! From rifle wielders to guards with shotguns and even rocket launchers, you’ll be running the gauntlet if you wish to survive. Given that the simple goal is to progress from beginning to end, it’s not essential to take out each guard in your path, and often it’s a far smarter decision to evade their line of sight, for as long as they can see you, the threat will keep coming. That’s not to say that Ape Out is a stealth game either, in fact you’re probably the most powerful entity in the building with your triggers (if you’re playing on console) serving as your grab and push controls, giving you all you need to survive. Guards can be used as a meat shield, while you can even point them the right way and use their desperate attempts to shoot you as an opportunity to shoot their peers. You can even just swat people out of your way, and if they hit the wall, it’s a bloody mess that they’ll leave behind.

Each world, save for a few specific bottlenecks are procedurally designed, ensuring that each escape attempt feels fresh. With each death the game zooms out to reveal your pathway, telling you precisely how far you were from escape. Given the procedurally developed nature of the levels, this doesn’t tell you a great deal outside of how many of those key bottlenecks you progressed beyond, but it doesn’t look impressive aesthetically.

For as manic and chaotic as the moment to moment action can be, it’s Ape Out’s impressive sense of style that really takes centre stage. A fantastic jazz beat has been infused into the experience that has been synchronises with the action creating a truly energetic experience. Piercing the smartly designed and implement drum beats are epic percussive smashes that erupt from your speakers with each kill or as you destroy an environmental object. The mostly top down perspective attempts to obscure guards behind high walls that only reveal what lays behind them as you round the corner, while the solid colour of the gorilla as well as the guards ensures you’ll never lose yourself, or a threat in the environment. Though you could be forgiven for thinking that the visuals were quite simple, it’s clear that significant thought and care had gone into each decision that was made, creating an experience that’s as striking visually as it is sonically.

The core run through Ape Out can be completed within about 2 hours, even with dozens of deaths along the way, but the experience isn’t singularly limited to that four record (yep, the worlds are musical records – the Jazz influence continues) run. Players can opt to complete the game at higher difficulties and also attempt the toughest task of all, “Break In” where you need to both break in, and then out of the high security prison to rescue a baby gorilla, a prison that regularly re-populates itself with security no matter how many you kill on your way in. There’s not an overwhelming amount of content here, but given the short burst, pick up and play nature of the game, this isn’t a major concern.

Ape Out, this glorious merger of Planet of the Apes and Hotline Miami is something remarkable. While the games brevity might be off-putting to some, and the post-death map is kind of meaningless, the fun that can be had, in either short or long bursts, is sure to keep you entertained as the difficulty curve ramps up and the challenge becomes greater. In the wise words of Freddie Mercury “I Want to Break Free”, and I want to do it, over and over again.