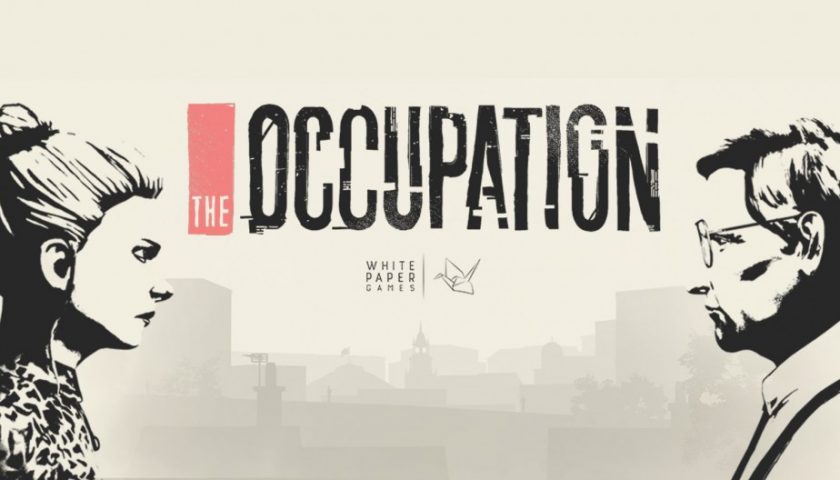 On ambition and concept alone, The Occupation is a stellar game, using a fascinating real-time mechanic to add urgency and realism to your investigative caper. On execution, The Occupation is a clunky and frustrating experience, with bugs and unreliable AI hampering what could still be a front-page success with future updates.

Quite unlike anything else I’ve ever played, The Occupation is a first-person exploration game set in 1987 Britain, where each real-life minute counts as one minute in-game. Predominantly playing as journalist Harvey Miller, you’re tasked with reporting on controversial draft legislation known as The Union Act. Supporters claim the act is for data gathering purposes and building a more secure Britain, but it also appears to have harsh privacy and immigration consequences, too. Throughout The Occupation, you’ll be gathering information and interviewing staff of the Bowman Carson group, the organisation behind The Union Act.

Beginning the game as Scarlet Carson, Chief Operating Officer of the Bowman Carson group, you’re introduced to the core gameplay concepts driving The Occupation while snooping around the office after-hours. During this introductory section, you’re given a fairly low-risk scenario to learn how to interact with your surroundings. This includes disabling fuse boxes to access electronically-locked areas, viewing sensitive data on cutting-edge floppy disk technology, and so on. While playing as Scarlet, you learn that she is mourning the loss of her husband, Michael, one of the company higher-ups, who died in what was labelled as a terrorist attack on the company’s data centre. Fueled by her anger and grief, your objective is to back up a shady software central to The Union Act known as Silhouette. Following the introduction, a period of time passes where Scarlet quits the company and you assume the role of journalist Harvey Miller visiting the Bowman Carson group for a series of interviews to figure out what the hell is going on.

While playing The Occupation, you’re literally up against the clock ahead of each interview, with an hour before every appointment to glean more information and conduct a more thorough interview. Here, one hour of in-game time is the equivalent of one hour in the real world – you’ve even got a watch accessed via the left-directional button to check how much time left you have to snoop!

To help guide these precious hours, you’re provided with a dossier relevant to your upcoming interviewee, accessed by pressing the touchpad. This dossier shows a list of interview questions, potential leads, and general observations – all of which inform your approach. For example, one of your first leads is to investigate the Bowman Carson group’s phone records to corroborate the suspect’s whereabouts during the alleged terrorist attack. It’s then up to you to pursue the lead and uncover further sub-objectives along the way, achieved by reading notes, retrieving files, and accessing incriminating recordings. Seeing a lead through to the end results in a new interview question added to your list, which is vital to uncovering the truth. However, most information related to these leads is not freely accessible, which is where the general observations section comes in handy. As you read office bulletin boards, eavesdrop on conversations and the like, this section will automatically update with staff movements or potential alternate paths to otherwise locked rooms.

Amusingly, for a medium marred with that controversy some years ago, The Occupation genuinely explores ethics in journalism, due to the fact you’ll frequently need to source information through dubious means. You’ll be sneaking around restricted areas and accessing confidential information while avoiding the company’s aloof security guard, Steve. To achieve this, The Occupation features an astonishingly vast amount of first-person exploration within a confined area, reminiscent of the Dishonored series. There are always multiple paths to get to your goal; a locked room is a problem solved by either finding the necessary key card, sneaking through a connected air vent or observing an alternate opportunity such as waiting for the cleaner to unlock the door. With each one-hour block of The Occupation taking place in a different section of the Bowman Carson offices, you’ll spend a good chunk of time exploring, and it’s highly unlikely you’ll see everything on your first playthrough. There’s a great sense of discovery in unearthing a scandalous cover-up with far-reaching ramifications, further heightened by the agency The Occupation grants you to do things your way. I particularly enjoyed the payoff in presenting a questionably-gained piece of information to contradict an interviewee’s statement, causing them to fumble and squirm in their chair. Your sleuthing efforts always feel rewarded and add tangible impact to your interviews and subsequent late-game choices in deciding what to do with the volatile information collected.

On the other side of the broadsheet is how The Occupation’s gripping real-time feature is also one of its greatest frustrations. Especially when playing through for the first time, one hour is deliberately not nearly enough to discover every scrap of data and intel. This in isolation is not the problem, it’s other issues that rob you of your precious time. Stealth comprises a major component of The Occupation, but its lukewarm implementation caused me no end of annoyances. On multiple occasions, I witnessed security guards clip through walls and spot me when I was certain I was hidden. Another time, I waited for a guard to go upstairs before I dashed to a staff-only room to retrieve a floppy disc containing incriminating evidence. However, despite the act taking less time than required for the guard to return, I still somehow got caught. Fortunately, you do receive multiple warnings for being caught in out-of-bounds areas, but it doesn’t account for the time wasted in being taken back to the security office for a scolding. Unlike Hitman, for example, The Occupation poorly communicates its stealth components. Other than a slight vignetting effect in the screen corners – which I’m not sure actually communicates anything specific – there’s no discernable indicator to know if you’re properly hidden or not. Especially when the tense “you’re about to be spotted” sting plays, I want to know if I’m out of the bloody way.

Controversially, The Occupation does not include checkpoints, only saving after completing each chapter, which generally occurs after each interview. You can quit and restart the chapter before completion, but this means having to start from its beginning and redoing the entire hour. Coupled with the frustrating stealth and AI, I found myself lamenting the time limit because I couldn’t trust if I could undertake a particular action without penalty, forcing me to play at a significantly slower pace than desired. Sometimes, all I wanted to do was to replay the last 10 minutes before an interview, but the lack of saves prevented this. I replayed Harvey’s first chapter in full several times to try and uncover everything but did not extend the same patience to the rest of the game, instead of accepting whatever came my way. From one perspective, the emphasis on using your time wisely adds significant weight and tension to your actions, but this quickly turns to exasperation and tedium if you get caught out by some of The Occupation’s various bugs.

Other than the major stealth issues, I encountered other bugs, such as not being able to access some vents that were clearly communicated as being a valid option. Another time, I used a vent to visit a locked room, but bizarrely I was unable to re-enter the vent, wasting more of my time. Additionally, The Occupation’s UI is not very accessible. During pre-rendered cutscenes, the subtitles are absurdly tiny, and text during live play is only marginally better. Since release, version 1.03 has landed, which stated some issues with 4K displays, so this may still be a work in progress. To cap things off, The Occupation has some very long loading times, especially on boot-up, even on my PS4 Pro.

Although imperfect in many ways, I still consider The Occupation to be a totally worthwhile experience and a great display of ambitious game design. The investigative components and political thriller narrative are highly engaging in spite of its clunky packaging.