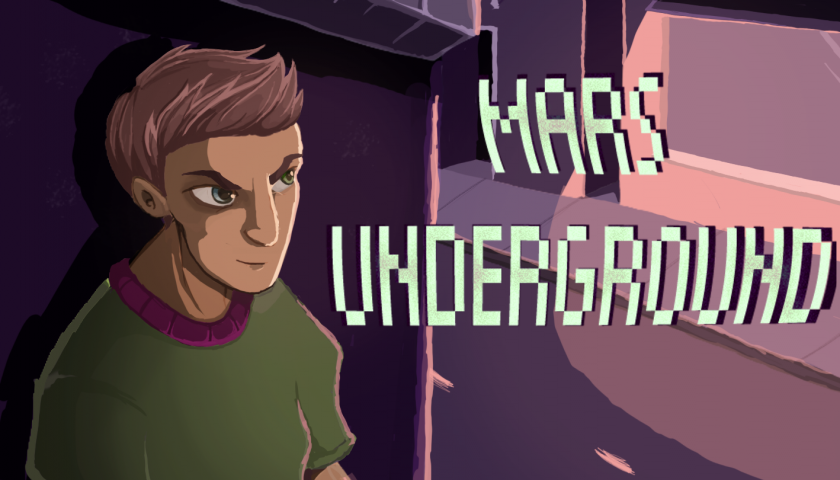 Some people would say that reaching the end of the game is not important, but that it is the journey you make on your way to the end that really matters.  This sentiment is significantly apt when it comes to Mars Underground from Moloch Media because despite doing everything that is needed to finish the game, I still have no idea just what the hell is going on.  One thing I do know though is, unlike the point and click adventure games of the past, death is not a bad thing.

You take control of the titular character Mars on his first day in a new school after an incident at his previous school.  Now as most people know there is nothing worse than being the new kid on their first day at school, a problem that is only compounded when you are also stuck in a time loop with no idea why it is happening.  What is really going on with Dr Kronus?  Who gives Mars the ‘Quantiser’ to use against Dr Kronus?  Do cat people and aliens really exist?  Are all toilets both sentient and magical?  The answer to some of these questions will be revealed as you play the game, but there will be far many more questions left unanswered by the time you finish.

As Mars relives the day cycle over and over he will discover objects and conversation topics that will help him figure out the strange goings-on in his new home and find different ways to break the time loop.  Some of these are very easy to figure out, such as throwing yourself in front of a car, but others will take you more than a few cycles to figure it out.  Fortunately, if you do find yourself really stuck and not making any progress for a few cycles the game will offer help, giving you clues of even straight out instructions if you want.  Thankfully there is never a game-breaking moment where you will be stuck without a specific item because you happened to miss it X amount of hours ago.  If you find yourself stuck you can always take your medication and restart the cycle, although, in something that is straight out of a Doctor Who episode, any item you pick up will still be in your inventory when the cycle starts again.

The biggest thing I have trouble with in this game is wrapping my head around the ending.  I think I am there, and yet it seems like there is no clear ending and there are a number of unanswered questions and narrative strings that are left completely to your own personal interpretation.  This may very well be intentional narrative and design choices, letting the user experience the game and draw their own conclusions.  There is no need for a player to have to know absolutely everything, but it just seems like the game has focused on the daily journey Mars undertakes to get out of the loop without giving an explanation for why or how.

Despite this, Mars Underground is a great indie game.  While it is by no means a massive game, the creativity and craziness that it holds make this a little RPG title for those who love the old school adventure games filled with craziness and humour like the Monkey Island series.