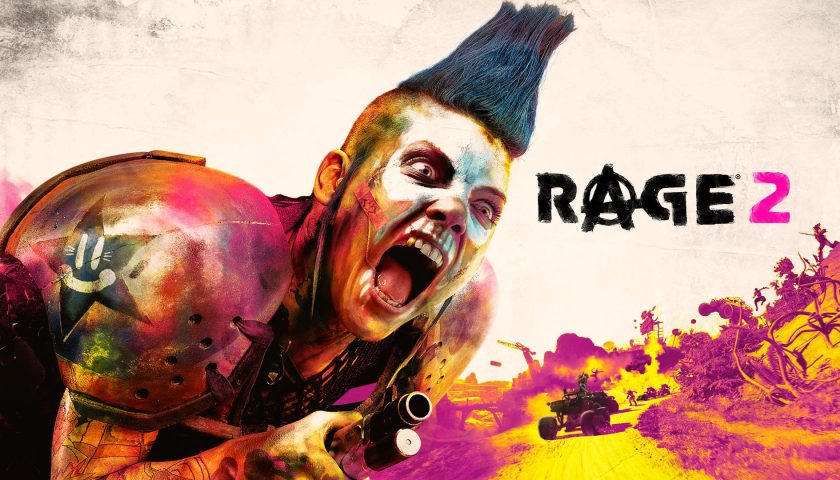 The first Rage was an interesting mix of shooter and tightly-bound open world. There was little to do out in that world. Its purpose was to give a geographical connection between points of interest, to exemplify the sparseness of the remaining population. To give the sequel to Avalanche, the studio responsible for the excellent Mad Max title of a few years ago, therefore, seems appropriate. In practice, though, there’s not enough of that game present in Rage 2. Yes, there are convoys and plenty of small outposts dotted about the map, but part of the beauty of Mad Max was how intricate some of its camps were, almost mini-maze-traps that compelled you to stop and enter.

I can understand that Rage 2 is an action game foremost. I just found myself a little disappointed at how openly laid out each encounter was. In fact, I think Rage 2 is at its best when it shifts to linear corridor shooter- it’s during these phases that it feels like a cross between DOOM and Destiny, offering a satisfying combo of atmosphere and action.

The first few hours of Rage 2 are tutorial heavy, as you are bombarded with new weapons, skills, upgrades and upgrades-of-upgrades. Everything can be added to, from your weapons to vehicles to the physical skills you use to commit chunky murder against hordes of mutants and crazy bandits. I remain a fan of the wing-stick, though I do wish it wasn’t a consumable – having it return, boomerang-style, after lopping off heads would have been cool. As a consumable, I found myself relying more on the explosive guarantee of grenades over the possibility of a dud wing-stick throw. That said, it’s still really fun to throw one out and have it instantly decapitate a rage-filled freak that’s coming for you.

One would expect, given the DNA present and the studio involved, that the driving in Rage 2 would be the first easy tick. Alas, something went wrong here and we’re left with plodding vehicles that elicit no joy whatsoever to control, making large chunks of gameplay feel like wasted time slowly dragging yourself between scattered map points. You can hijack vehicles and return them to a settlement to add them to your collection, but honestly, there’s little point in trying to go large because – sure it might have an awesome big tank gun on it – but you’re going to move slower than a mobility scooter as payment for that firepower. It truly is a wonder because Mad Max had that perfect feel of digging into the road and driving with speed. I’m truly at a loss as to why the vehicles in this game drag the experience down so much. It makes the convoy attacks in Rage 2 difficult to enjoy as opposed to being one of the best aspects of Mad Max.

Luckily, when you’re in the thick of it, pulling off X-men level moves and splattering foes against the walls, the dull trip there can almost be forgotten. Each camp or roadblock offers up 10-20 helpless fools to murder, then you look about for loot, maybe open an ark door or ark chest (which contain upgrades and special powers) and then hit the slow road again to repeat once more. As mentioned above, the best parts are when Rage 2 narrows in on being a shooter. After only a couple of hours, I was over the open world itself and just mainlined the missions. The world feels inconsequential, a fallback to the first game when I’m sure no one would have cared if they’d just followed DOOM’s approach of large, contained levels with heaps of satisfying traversal to compliment the action.

The story is badly written, but you know what – I’m kinda down with schlock. With only eight main story missions, things don’t have time to mean much at all. The action is thick, fast – and yes – visceral. By the time you’ve got a handful of abilities, you really do feel badass, stringing combos together just to toy with enemies. Once the grav-dart came into play, allowing me to tether and fling muties into the air, I never stopped smiling every time I did so. The campaign is short, hence (I suppose) the attendant open world to keep you playing. But I was satisfied to leave it there. I felt no desire to clear the map at all and not even the enticement of more powerful upgrades could overpower my ambivalence towards what is so clearly busy work.

The collect-a-thon aspect of Rage 2 is more additional padding. Throughout each location, there are heaps of little loot crates that need to be physically broken open with a melee hit or shot in order to unleash their contents – usually just more ammo. There are also checklists that pop up in the top left corner of the screen, listing pink-lidded chests that are hidden all over the shop. If you want to gain more money/resources for fully completing an area, every stop then becomes this strangely sedate chore of looking around for damn pink lids and popping them open. I’m truly surprised that it wasn’t more streamlined – say, some kind of vortex that sucks loot to you like in Ratchet & Clank (to be fair, there is an upgrade that does this partway through the campaign, but it’s only for the blue mineral you collect, not for cash or ammo). Heck, even each chest exploding its contents upon you as the last enemy is killed would have fit with the crazy theme Rage 2 reaches for. But nope, you can do the work, getting thoroughly frustrated at having to sweep through a camp sixteen times to find the last hidden crate that ends up being on a rooftop or something.

The game as a whole also feels a bit unfinished. During the opening sequence, I witnessed floating chunks of enemies in the air and bodies stuck in rubble just jerking about. I also had the game lock up on me in the menu screen (themselves incredibly unresponsive and laggy), requiring a title reset. Graphically, the 30fps feels restrictive, especially given that the textures present don’t look particularly taxing on the hardware. At times, the overall graphical presentation even feels a bit last-gen, like looking at a 360 or PS3 game. Now, I’m as forgiving of fidelity as possible – I game a heck of a lot on undocked Switch – but when something is from ID and DOOM ran as smooth as a silk sheet at 60fps, it feels fair to criticise the sub-par performance.

It is still fun, though. The shotgun is a thing of beauty and I was upset whenever I ran out of ammo for it. Bethesda is pretty good at supporting titles post-release, so I’m sure we will see some improvements patched in soon. For now, though, I’d suggest the mainline route, ignoring the collect-a-thon and hoping the short but sweet experience tides you through to DOOM Eternal.