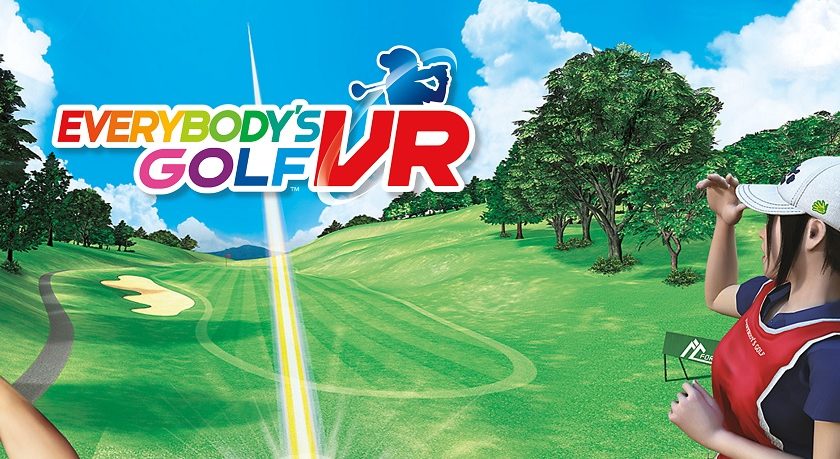 The level of support for the PlayStation VR has been steadily growing from year to year, but while we’ve seen plenty of experimental concepts emerge, many of which have been successful that have taken centre stage. All-too-often a byproduct of this is that more familiar concepts or faces with a new VR-fuelled spin on them often end up being ignored and/or forgotten. The Everybody’s Golf IP has been thriving in recent years, and it is this “familiar face” that sinks a beautifully weighted Birdie that should have people stand up and pay attention.

I’ve not been shy publically over the years that I do not enjoy watching, nor playing Golf. Golf is a wonderful combination of disciplines and patience that don’t lend themselves well to my personal qualities, and whilst I can appreciate the immense skill and control required to drop an epic Tiger Woods putt, or to strike a ball like Rory McIlroy, it has just never jived with me. That said, it is significantly more appealing to slide on the Playstation VR headset and tee off from the warm comfort of your living room. I’ve toyed with Golf games in the past, but none, including Nintendo’s motion-controlled take on the sport via Wii Sports, have managed to create an experience that held my interest for any sustained period. Everybody’s Golf VR has however succeeded where past games and even past franchise entries have previously failed though, creating a truly immersive, engaging and challenging Golf experience.

Veterans of Golf games, either of the arcade or sim variety, will be very familiar with the interface that you’re presented in this VR entry, but after a very quick calibration and setup, and an equally brief (but no less important) tutorial, you’re out on the fairways before too long. What impressed me the most was that despite the arcadey look and feel of the experience, at its core, Everybody’s Golf VR demands accuracy, a level of accuracy and nuance that the PSVR manages to support. From the rotation of the club through your hand to the deft touches required for a mid-range putt or even your positioning relative to the ball, the PSVR picks it all up, leading to simulation quality gameplay with a wonderful arcade look.

Players can choose between either the Dualshock 4 or the PlayStation Move controllers, and both respond well. If you’re looking to best simulate the experience of lining up putts or launching long drives, then your best option is undoubtedly the Move controller, but the Dualshock is all you have at your disposal, it will do the job without any hiccups.

Whilst the playing experience is solid, there’s not that much to actually enjoy. The driving range is about what you would expect, but the core experience, out on the course is light on for content. Out the gate, you will only have access to one course, the Forest course and you’ll spend quite a bit of time there before others begin to unlock. The range isn’t overly wide, nor is it particularly diverse, but they each pose their different challenges that require significant skill to navigate. The most aesthetically pleasing though is the Dinosaur course which has a few of our prehistoric friends stomping through the landscape. Beyond the two core modes, there’s nothing else for players to enjoy, save for online leaderboards. There’s no online competitive online multiplayer which is a big miss for a game that’s already light on for content, and would have been a fantastic way to keep players engaged for much longer.

Everybody’s Golf VR is, for quite obvious reasons, a major turning point for the franchise, the inclusion of VR, brings about a franchise first, the first-person perspective. Both of these inclusions mean that some user-friendly options have been added, the vacuum holes are one such example that assists to counter any potential lack of precision from either the player or the technology. Other additions are a bit odd; every now and then, between holes, you will join your caddy in what is supposed to be a bit of bonding time, but comes across as quite awkward, most likely resulting in you mashing buttons on your controller of choice to skip it as quickly as possible.

The latest iteration of the Everybody’s Golf franchise is a prime case of quality over quantity. What is there is excellent, but what isn’t, could have elevated this game, and potentially even the franchise, to higher levels than it has ever previously reached. It’s a birdie, but with a little more thought could easily have become an albatross.