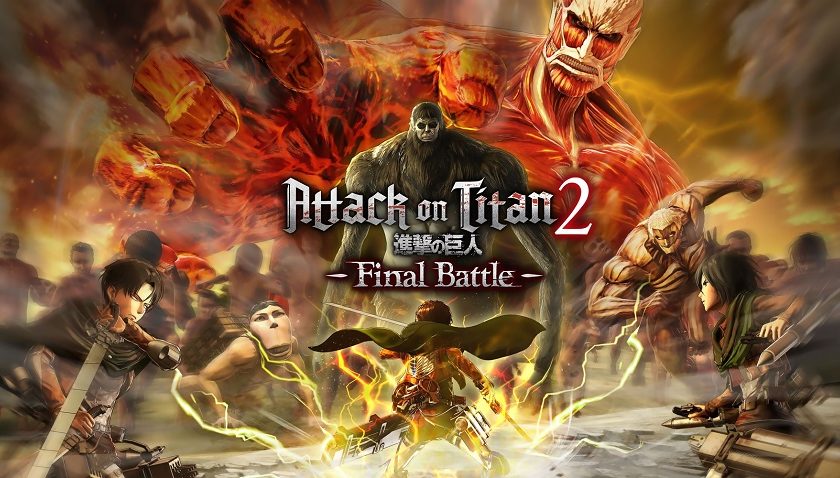 For those that may seem a bit confused, Attack On Titan 2: Final Battle isn’t a new game.  What it is though is an expansion on what was originally offered, adding the existing story by incorporating the events of season three of the Attack On Titan anime along with the introduction guns into the players’ arsenal for use in the abundant slaughter of rampaging naked giants.

Coming into this review I had never seen an episode of AoT, still haven’t for that matter. If you are in the same boat fear not, as the game takes you through the events of the anime, placing you in the shoes of a previously unknown character and unleashing you on the titans, naked giants that are all naked and trying to eat the regular humans.  Thankfully, while the giants are naked they are sans genitalia because that would lead to way too many penis jokes for me to fit in this one review.  While we here at P2 are not above a good penis-related joke, thankfully you will not be confronted with giant penises bouncing around as the titans run amok, and no need for guys to cringe as they get chopped off.

While this is a game that can be picked up and played by anyone, at the core of it a game like this is for the fans of the series.  Fighting alongside your favourite characters as you hack and slash your way through lots and lots of titans.  The greatest part of AoT2 is definitely the movement and combat, utilising your Omni Directional Movement gear to fly around the world. With a little bit of practice, find yourself flying through the air and around your targets as fast and as smooth as a steampunk version of Spiderman.  The combat can take a bit of getting used to as you need to ensure you approach from the right angle and have enough speed to inflict damage to the part you are targeting.  Fortunately, if you find you just can’t quite get the hang of it there is always an easy mode that will take most of the guesswork out of combat.  Just pick the body part you want to slice off, hit a button and the game does the rest for you, showering you in a spurt of titan blood.

Thankfully the game handles the action very smoothly.  Despite constantly flying around the world with other characters, blood gushing from severed titan parts and buildings collapsing the frame rate stayed consistent.  While I already alluded to the similarities to Spiderman, I would make the argument that the traversal system in AoT2 feels faster than that of Insomniac’s Spiderman game.  This may be because all the combat is based on the traversal system, rather than utilising web-swinging in combat to complement it.  However you look at it, the movements and action are fast, which makes the lack of the English voice cast a pain for the western audience.  Trying to read the text subtitle while in the heat of battle with a group of titans is not easy.

Visually, AoT2 looks great.  From the industrial era style of buildings in the Trost District to the ravaged ruins of villages beyond the walls, the presentation of the game world is great. After checking out some of the anime you can see the developers have made sure they nailed the way the characters both look and act, and the action cutscenes look almost as good as the anime as well.  The only gripe I have is that all of the characters tend to revert to a default pose with their arms out, like the guys from the gym that think they are carrying buckets all the time as they walk around.  This happens whenever they are not actively doing something with their hands.  It is a minor gripe but it cuts into the life of the characters, emphasising that they are just animated models in a game, and not characters existing in a living, breathing world.

The biggest problem to be found in the game comes from the sheer repetitiveness that players will experience as you play through the game.  Other games based on anime, such as My Hero Academia or even the Dragonball, do have their share of repetitiveness, especially since they are predominantly fighting games, but they mix up the action the player faces.  Whether it be taking on other characters and adapting to their skill sets or fighting a battle while handicapped, they have parts which change up the gameplay formula, if only in minor ways.  The problem that AoT suffers from is that the formula barely changes at all.  You fly around a titan, slicing off limbs as you do so, before going for the killing strike to the back of the neck.  As you progress in the game you will unlock the ability to capture titans, but overall it is the same thing over an over again.  The end of missions may have you taking on what is known as an ‘abnormal’ titan, but the only difference to the way you approach them is to hit the lit up weak points until they are ready to take damage.

It seems like the developers understood this, as they have loaded the game with a bunch of other systems to give players things to do.  You can talk to other characters from the anime and build up your friendship level with them, giving you access to a range of abilities that range from the basic strength +3 to advanced moves that help bring death to a titan even quicker.  You can also upgrade your gear to make it more powerful and allow you to fly around faster, or if you want to change it up you can develop gun weapons that were introduced in season 3 of the anime.  It just seemed to me that it was not enough to counteract the amount of time just doing the same thing in missions.

While AoT2 does have its faults, it is a game that fans of the series will love and enjoy playing, especially those who love the challenge of getting the ODM gear to work just right without having to resort to easy mode.  If you can look past the repetitiveness of the missions, you can play right through the storyline and get yourself up to speed on the story of Attack on Titan without having to watch all of the anime, and while killing titans may get a bit old, swinging through the city and mastering the ODM never does.