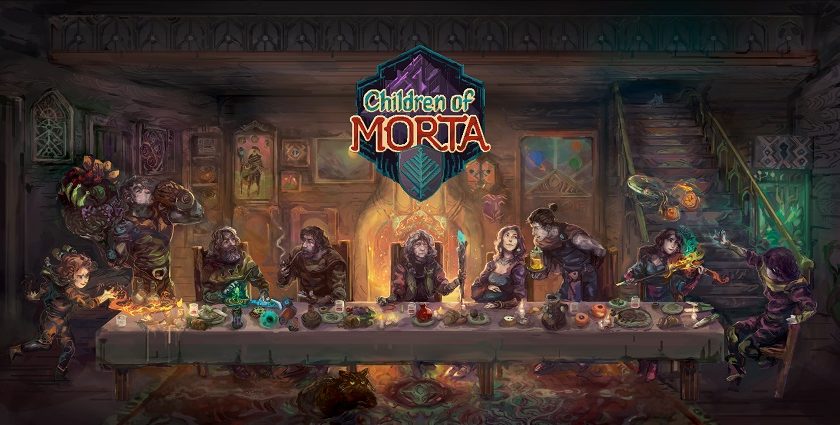 In the face of cataclysm we forget that the little moments of family continue to occur; a minutiae that most are not privy to and an intimacy that is usually displayed quite differently in narrative. It is with this thought that I applaud Children of Morta for aligning the story of a family against a force that can only be described as ‘corrupting’, but the applause is hard to maintain.

Children of Morta gets so many elements right that I absolutely adore. From a practical sense, the controls on the PC version are gratefully different from the controls that have fuelled my unhealthy Diablo obsession for so long. While my Diablo 3 gameplay necessitates a high level of clicking that has started a deathmatch between my wrist and my mouse, Children of Morta uses WASD controls with left and right mouseclicks for basic and special attacks, and mapped buttons for the super sweet abilities or charms that you pick up along the way.

Note that I say abilities and charms, and either glee or weep when I say that yes these are random to each dungeon as well. The hybridised mode of gaining abilities and skills is a neat little quirk in this game. Where I often struggle with the initial failures of roguelikes, the first-room fatalities in Children of Morta allowed my Bergson-branded pin cushion to keep experience, currency, and unlocked skills. Some passives are unlocked for all characters, justified in the context of the family unit training and improving together. It provided purpose to the frequent failures as the characters grow and develop, but also gave reason for a few shoddy runs as Linda the bard/archer to unlock a couple of her base passives to improve Kevin the teenage assassin suffering under the propellers of his mother’s helicopter-parenting.

Spending limited time with each character quickly unearths their action-RPG archetypes. John and Linda serve well for the very initial foray into a warrior’s melee and a bard’s ranged attacks, but it is the next generation in Kevin (and even Lucy) where the pace of the combat increases. However, I found myself needing to approach these early stages slowly and divide and conquer enemies.

This is where I started to see a tiny hole in Children of Morta – certainly not game-breaking and moreso a slight unease. The gameplay is great, and we can briefly mention here that the aesthetic and artstyle is fantastic (a delightful complement to Moonlighter) and the narrative stresses a rhetorical style of importance that kept me interested in that moment. Subquests are contextualised within the narrative, but also are random drop events in each dungeon. In two sentences I know that the game gets a big tick for getting the roguelike essentials right.

What pains me is that Children of Morta just takes the elements and puts them side by side on a plate. They got all of those elements right and presented them with satisfactory skill and flair. But it feels like we have a bunch of things on a plate the audience is expected to create their own dish, and that is quite frustrating. At times when I am savouring the repetitive grind and its eventual rewards, I am forced to lump the narrative gravy on a tablespoon and swallow at times that don’t make sense to my own experience of the meal. Similarly, I want to know what happens next in the story but have to do the mandatory “rinse-spin-die” to propel the story forward. This is the most jarring when key components like the Blacksmith (Uncle Ben), Shopkeep, and in-dungeon shrines felt like they were unlocked arbitrarily, and I cannot for the life of me work out the formula that dictates that Death number 34 will prompt the emo kid with daggers to run off and the orphan cub to turn up in a room to the right in that first level of that cavern.

It doesn’t make Children of Morta a bad game, and I wish more independent games took these chances and came out with a game that was this polished. It has taken all of these big wonderful things that are delightful in their own rights and endeavoured to put all of these ideas into one opus. There is a way to enjoy everything there is to offer if you are patient with yourself and just accept that dastardly corruption may be hanging around for a little while longer while your monk gets taken out repeatedly by tiny purple ooze monsters.