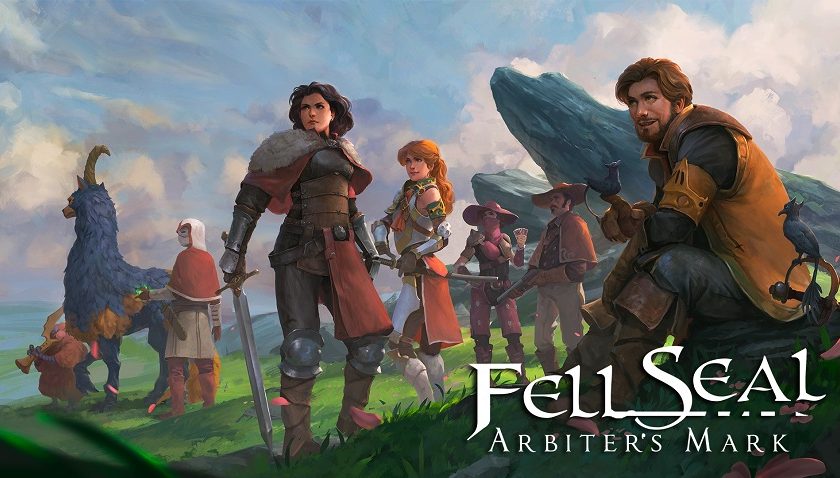 I’ve only played two tactics games before, both on the PSP. For those that don’t know, the PSP (Playstation Portable) is an ancient handheld gaming device from the Mesozoic era, circa 2005. The two games were, “Tactics Ogre: Let Us Cling Together” and “Jeanne d’Arc”, both of which I recall enjoying. I never played other popular tactics titles such as Final Fantasy Tactics or Fire Emblem, so Fell Seal Arbiter’s Mark, from indie developer 6 Eyes Studio, would be a nice change of pace.

I’ll admit that at first, I wasn’t really that keen on playing a tactics game. They generally need a lot of attention to detail and a love of figures and spreadsheets. I was also expecting clunky 8-bit graphics and character designs.

Fell Seal was brought to life via Kickstarter, and when I checked out its page, I saw that it achieved a little more than its target goal. It missed out on several stretch goals, but’s great that the game was funded and is now available on Pc, Linux, PS4, Xbox and Switch.

The game made a good first impression with its beautiful hand-drawn graphics, starting with the title card and carrying through to the environments and various characters. Game maps are presented in as isometrically viewed grids, that allows for different elevations. This does seem standard for tactics games, but the lines and shading in Fell Seal just seem so clean. The various characters in the game are represented by full models in the game world and lovely hand-drawn portraits to accompany dialogue boxes. The story protagonists have unique portraits and models which I think captured their respective personalities. A lot of the fun, however, comes from building your own characters from a big range of portraits, body types, clothing and accessories. There was a decent choice, but I still would have loved more. For those that are artistically inclined, you can even add your own custom portrait graphics to customisation folders installed with the game. I played the game on a Pc through Steam, so I’m not sure if something similar will be available on other platforms, but it’s a nice touch all the same. Apart from the main characters and hirelings, there a heap of cool-looking humanoid and monstrous enemies to keep things interesting.

The story is of the “save the world” variety, but enjoyed it, along with the world-building. The two main leads, Kyrie the Arbiter and her new apprentice Anadine are likeable heroes and enjoyed their journey as the game progressed. To briefly recap, the game sets up a history where a group of champions defeated a great evil, and then used its power to become immortal and rule the land. The immortals nominate Arbiters as agents of justice, and we meet our heroines just before events conspire to trigger a great adventure.

If you have any interest in tactics game, then the combat and character customisation is probably to be of most interest to you. Fell Seal has an open class system that allows for a huge amount of personal preference and fine-tuning. Each character gets access to some basic classes to start. A class is really a collection of active and passive abilities and traits. Levelling up abilities in these classes unlocks additional classes, and a character can have a primary and secondary class equipped at any one time, along with any single counter ability they’ve learned from any class. This is almost overwhelming (at least to start), but the really cool stuff happens when you combo abilities from the different classes. Here’s one example. Knights have a top tier ability called “One for All” that allows your character to attack an enemy after each ally attack. Except, knights are melee characters, so you’d need to be in the middle of a bunch of enemies. At least, that’s what I thought until the AI combined that with a dual wield passive and pair of pistols. There’s a great sense of discovery experimenting with different builds and finding seemingly disparate skills that work wonders together. That sense is renewed whenever a new class with new power unlocks.

Battles allow you to bring in a set number of characters, usually 6 from your roster. You’ll definitely want to hire additional characters so that you can experiment with more class combinations, but another reason is to allow injured characters to recover. Any character that falls in battle sustains an injury. You can use them in a subsequent battle, but their statics will be reduced. They need to sit out one battle per injury to recover. I do like this mechanic as it forced me to use other characters and round out my roster a bit more.

On the battlefield, you’ll need to think about which direction your characters are facing, whether they have a height advantage, whether they can be knocked of a ledge, along with what your enemies’ powers might be. You can also equip your characters with a wide array of melee and missile weapons, armour, shields and trinkets. Item use in Fell Seal is interesting in that items replenish after each battle. Having 3 potions is more like a capacity for 3 potions per battle, so you don’t need to worry about conserving items across battles.

The game advised me to play on easy, and I’m glad for that advice. Most battles weren’t too difficult, but I found occasional difficulty spikes that would frustrate me for a while, and I’d end up grinding easier battles to level up my characters. I tended to just go with my gut when mixing and matching classes and skills, so I may have had an easier time of things if I paid attention to the details. Either way, the gameplay is quite enjoyable, and once I was familiar with the controls (which didn’t take long to master) I was able to flick through menus and make combat decisions easily. There were only two or three battles that caused me to almost hurl my controller, but I stuck with it because the game is so well made and fun to play. Also, the battle tune is simple, but addictive! I found myself humming it a few times (To those I annoyed on the train, “sorry!”).

Fell Seal is a little gem. I’m glad I got to review it, as I don’t think it would be the type of game I would have chosen on my own. I think it is a fun, accessible example of a tactics game, and worth checking out, even if it’s not the type of game you’d normally play. For those that want more challenge, there are more difficulty levels, optional areas and bosses and secret character classes to unlock and master. Overall, I really enjoyed my time with Fell Seal: Arbiter’s Mark.