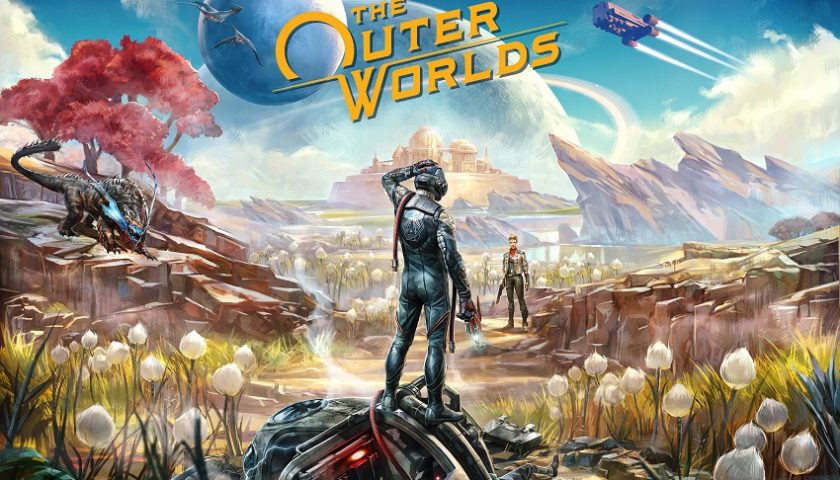 It is no secret that I am a fan of Obsidian’s work. From KoToR 2 to New Vegas to Alpha Protocol to Pillars of Eternity to Tyranny, these games speak to me in a way very few do. Maybe it is the dark, comedic writing, maybe it is the excellent and often experimental role-playing or perhaps it is just because they are always the underdog, underfunded and lacking in time while still producing excellent (if a little buggy at times) results. Whatever the case may be, when I was offered to go hands-on with Obsidian’s latest, The Outer Worlds, over a month before release I jumped at the chance. So off to Sydney I went, with a suitcase full of hope and expectations joining me for the ride.

The Outer Worlds is, without doubt, a return to the New Vegas style of RPGing that shot Obsidian to fame. It is a first-person title with a focus on exploration and black humour. All of this is evident from the get-go, with a wonderfully twisted introduction setting the scene for what will likely be dozens of hours of fun. After the intro into the game (which I won’t spoil) we were let loose in an open area with just one direction, have at it and have at it I did. Immediately exploring the world and seeing what the game had to offer this long time fan.

The first thing I noticed is combat feels fantastic, which isn’t always the case in these sorts of RPGs. Both Melee and gun-based combat work wonderfully and at times I could have easily been convinced I was actually playing an FPS, headshotting marauders and exploding the local wildlife with glee. Combat was enhanced by a number of RPG abilities, the most notable was time dilation, a bullet-time effect that functions in a similar way to VATS does in Fallout 76 (except, you know, not terrible.) As I played and killed more and more enemies, this system would learn and then begin to highlight weak points to target, making sure I was doing the most damage possible. This ability recharges over time and I found it to be almost essential when dealing with some of the tougher enemies the game sent my way.

During my time I stumbled on a few side missions, all of which featured the trademark Obsidian writing style. One feature a bunch of drug-addicted cannibals looking for their next meal while giving off a disturbing “Deliverance” vibe and the other had me resolving an industrial dispute between a brash group of employees and an embezzling foreman. What struck me most was that in these missions there was no clear right or wrong path. They both showed amazing shades of grey in the writing, which very much put me in the mind of Alpha Protocol’s murky approach to morality. I hope this carries throughout the game because I love the idea of games encouraging players to forge their own path and not just follow the lines of good and evil.

Graphically the game is looking great if a little busy at times. There was a stark difference in locations which should make learning the maps a breeze and there is almost an overwhelming amount of detail, especially in the towns and abandoned villages that make up a good chunk of the gameplay area. Enemy design is also exciting and while there are plenty of standard goons to kill it is the wildlife that steals the show. Crazy dog things, weird bugs and some life-size praying mantis that inspire fear in much the same way as a Deathclaw would. So many wild and wonderful creations are on display and I can’t wait to see what sort of crazy enemies are around in the full release.

As for the numbers, perks and upgrades that make up the RPGing, there are a lot of things to experiment with from what I saw. It feels very much like the systems in place in Fallout: New Vegas so fans of that franchise should feel at home here. I can see lots of room for stealth, action and dialogue-based skill sets so making your own custom playstyle should be quite achievable, though how much effect each skill has is impossible to tell from the amount of time I spent with the game.

I was always excited by the prospect of The Outer Worlds but having played it I am absolutely chomping at the bit to dive into the full version. It feels very much a love letter to Obsidian’s long-time fans with lashings of dark humour and a sense of familiarity without ever feeling tired. If you have ever enjoyed games like Fallout or Skyrim, this game should certainly be on your radar and let me tell you, October 25th can’t come soon enough. In the meantime, check out the gameplay footage that I recorded on the day, it will give you a great idea what to expect.