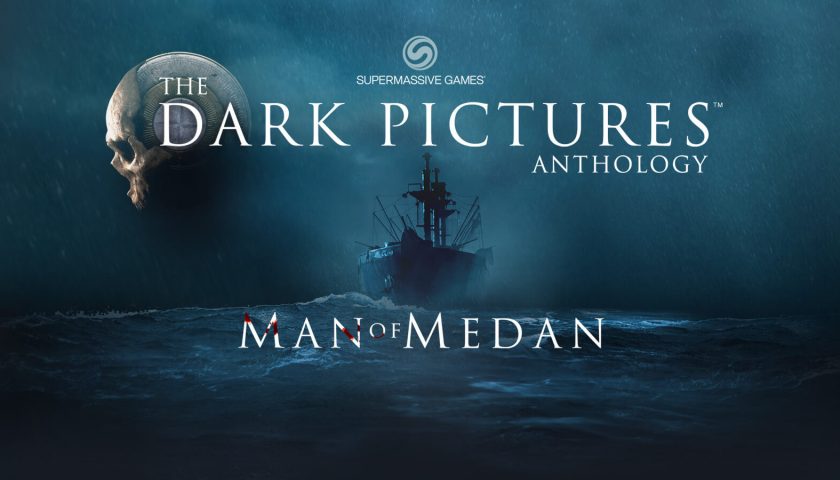 The Dark Pictures: Man of Medan – Flawed and Frightening

What’s scarier than ghosts? Zombies. What’s scarier than that? Ghosts AND zombies on a huge military ship. What’s even scarier than that? Ghosts and zombies AND PIRATES on a huge military ship in the middle of the ocean at night. If this all sounds horrible and terrifying to you, then welcome aboard the S.S Jenn’s Personal Hell. Starboard you’ll see Matt giving me yet another horror game to review and if you look port side you’ll see that everything is terrible and I am scared.

Whilst we sit aboard my vessel waiting for our inevitable grisly death, let me tell you the story of how I got here. It started with Matt saying “Hey Jenn, do you want to review the new title by Supermassive Games?” to which I said yes because I am an idiot. Having reviewed Supermassive’s last adventure, Until Dawn, I knew what to expect going into this one, but lemme tell ya, it really didn’t help.

The Dark Pictures: Man of Medan is the first game in the upcoming ‘The Dark Pictures’ anthology. You begin the prologue in a post WW2 era as a naval soldier, doing some drinking on the mainland with your buddy. Once you board your military ship however and awaken from your drunken stint in the medical bay, you come to see that things are not quite right. Corpses are being shoved into lockers, naval soldiers are running around the boat screaming, and creepy apparitions are appearing all over the place. And just as things are starting to get really interesting, the game jumps you forward into present-day and you meet the characters you’ll be playing as for the rest of the game.

Much like Until Dawn, the characters in Man of Medan all start off kinda annoying. Over the course of the game, the choices you make will alter their personalities and can mould them into better, more likeable individuals, but some of my characters didn’t have this opportunity for growth before they met a grisly end. Whoops.

It’s hard to care about the outcome the crew will face when the reason they’re stuck on this creepy ghost ship is entirely their fault. Man of Medan starts with you following the gang to an old military dive spot that the captain of the boat (Fliss) warns them not to touch. But they do anyway. Fliss tells them if they have to explore the wreck, they shouldn’t touch or take anything. But they do anyway. While half the crew is down below the water disturbing the dead, the other half of the crew is dealing with pirates who suddenly board their ship. And when I say “dealing with” I mean “pissing off”. So it’s really no surprise when these pirates come back late in the night and take everyone hostage before driving them to the creepy military ship to search for bigger, better treasure.

Once aboard the ship, it’s not long before the same eery shit that befell the last crew starts happening to your gang as well. As you search for a way off the haunted boat, exploring the nooks and crannies on board will yield some answers as to what the heck happened to the hundreds of military personnel who met their end here. It becomes clear very early that the only threat your cast face is not just the pirates who have them captive.

Over the course of my main playthrough I got “lucky” enough though that only one of my characters died, but the death felt so anticlimactic, and the character was so unlikable that I didn’t really care. What bugged me more, was that the brother of the character didn’t seem to care either, stoically telling everybody that their main goal had to be getting off the creepy haunted ghost ship before they could process anything else. Like, ok buddy, you just saw the insides of your brother’s throat spill out all over this boat, but sure, let’s shove that deep down inside and let your therapist work through that with you.

With death being the ultimate consequence of every quicktime action in the game, it’s a shame that they don’t resound more with the player. Though the deaths are less heartbreaking than they are surprising, Man of Medan, in most instances, does a good job of building the tension that leads up to these events.

Unfortunately, as hard as this title works to create moments of pure agonising stress and horror, all of this is offset by technical glitches and clunky controls. Manoeuvring your characters through the cramped catwalks of the ship is akin to trying to get an 18 wheeler through the eye of a needle. Not only do controls feel unresponsive, but trying to position your character in the exact right spot to interact with the world around them is hell, and nothing breaks immersion quite like wanting to hurl your controller through your television. Moreover, whenever something big and important is about to happen, the game stutters for a moment before finding its feet and playing out the sequence. I played on PS4, and though this hardware is getting dated now, Man of Medan definitely isn’t as taxing as some other games out there, and shouldn’t have as many frame rate dips and shudders as it did. That being said, the scaredy-cat in me was grateful, because it was a forewarning that I was about to encounter some story changing quick time events but it’s not really something that should happen. Even after patching the game, I still encountered a range of other glitches like subtitles being out of sync, and at times my character’s goals in the menu screen were just plain wrong: being told to “Escape from X” when X wasn’t even in the scene, for instance.

These issues can almost be forgiven when playing the game with other people however, as having someone beside you during times of stress is a welcome distraction from the horrors aboard the boat and the glitches both.

There are two ways to experience Man of Medan with other people; Movie Night and Shared Story. Movie Night is basically what everybody was doing in Until Dawn anyway;  you assign your friends a character who they then control in their scenarios. This is done by sharing the one controller, so if you want to play with 5 friends you don’t need five separate controllers to make that happen. This is a great game mode for parties, and definitely one I can see myself utilising come Halloween.

Shared Story is an online game mode that lets two people play it concurrently. Sometimes this will mean your character and your friends will be going through scenarios together on the same screen (as much of the game is played with the characters paired together). On the flip side, it also sometimes means you’ll be playing a scene while your friend plays through a different one at the same time, and unless you communicate what’s going on to one another, you’ll only ever see your half of the narrative. The concept is interesting, but only giving people the ability to view half the story in a story-driven game seems like an odd execution to me.

Despite its technical downfalls and other mishaps, Man of Medan still managed to scare the crap out of me. Most of the scares are cheap and jumpy, but hey, they worked. At so many points during my playthroughs, I found myself singing very loudly to myself to try and feel less scared, and I actively avoided looking into vents and opening up cupboards because I knew whatever was inside was just going to scare the crap out of me.

If Until Dawn laid the foundation for the interactive horror experience, then Man of Medan is hiding in the basement. Though the game is a step in the right direction for the genre in its creation and delivery of shared game modes, it also brings with it a plethora of technical glitches and other problems that just shouldn’t be present. Whilst calling this new game a step back isn’t fair, it’s definitely not making leaps and bounds forward, and if The Dark Pictures series of games wants to make a real impact, these issues will have to be fixed.