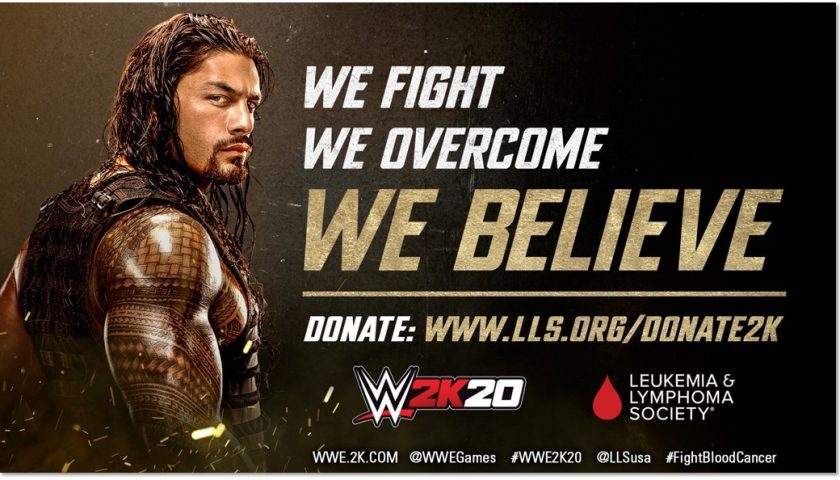 As part of the promotion of the latest entry in the long-running wrestling franchise, 2K, publisher of WWE 2K20 has announced a partnership with The Leukaemia and Lymphoma Society (LLS) to help promote and support blood cancer research and support for patients and their families.

As part of this partnership, 2K has issued a call to action on the @WWEgames twitter handle and will donate USD 2 to LLS for every retweet they receive, up to a grand total of USD 500,000. Not only this but 2K will be providing copies of WWE 2K20 to blood cancer patients as well as organising visits to patients by WWE Superstars and 2K personnel as well.

In honor of #WWE2K20 cover Superstar @WWERomanReigns we’re partnering with @LLSusa to #FightBloodCancer! Retweet this tweet and @2K will donate $2 to LLS up to $500K. Terms: https://t.co/YmO4wTuxR9 Looking to donate? Visit https://t.co/PvKPOAirXi pic.twitter.com/dF7v8XNCVR

One of the cover stars of WWE 2K20 is no stranger to what these patients are going through, Superstar Roman Reigns was forced to step out of the ring and surrender his championship in October 2018 after he was diagnosed with leukaemia again after 11 years in remission. Fortunately for him, he is once again in remission again and back competing in the WWE.

“Partnering with The Leukaemia & Lymphoma Society, the global non-profit leader in the fight against blood cancers, is a natural extension of our WWE 2K20 relationship with WWE and Roman Reigns and an opportunity for us to give back to the community, raise awareness and join the fight to find a cure,” said Chris Snyder, Vice President of Marketing for 2K. “Roman’s strength and perseverance to win his battle with leukaemia is truly inspiring to all of us, and we are proud to feature him on both the cover of WWE 2K20 and through a dedicated 2K Tower celebrating his incredible career journey.”

If you want to help spread awareness and generate more in donations for LLS go and retweet the tweet that mentions the partnership with LLS on the @WWEgames handle (it is easy to find as it is currently the pinned tweet). You can also click the link to make a personal donation to LLS as well if you would like to help.

The promotional period, for lack of a better descriptor, runs until the release of WWE 2K20 on October 22nd or when the $500,000 limit has been reached.