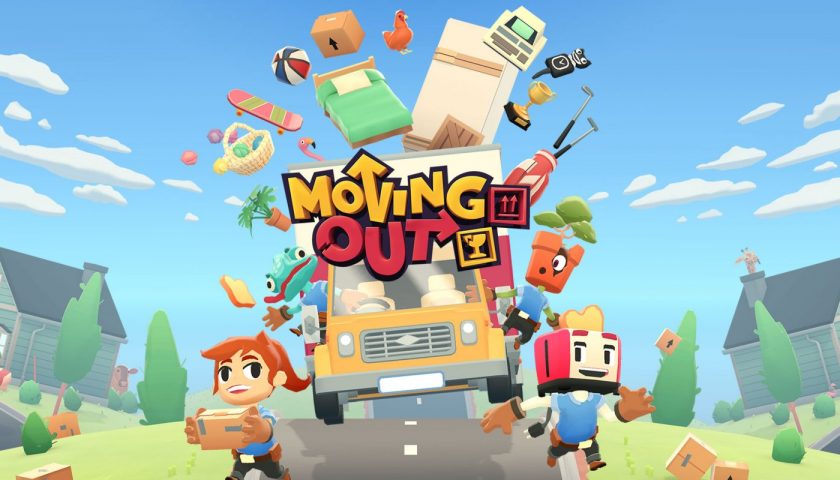 Moving Out Preview – Sofa, So Good

Moving Out is still a work in progress and will be releasing for PS4, Xbox One, Nintendo Switch and PC in 2020

SMG Studio has been on something of a tear in recent years. Breaking into the spotlight with the “One More” titles, they started to build a steady following which then exploded with the success of the acclaimed Death Squared. Since the release of Death Squared in early 2017 it has been heads down, hard at work on their latest creative endeavour, Moving Out. Initially revealed at the Kinda Funny Games Showcase 2018, SMG has remained relatively tight-lipped about the title in the ten-months post reveal, though I was fortunate enough to get hands-on with a test build this week.

In the last five years, I’ve moved homes a couple of times, and with each successive journey into a new home, the task gets even more complicated. Whilst you won’t have to juggle a <1-year-old son as I did when I was moving home, while you’re playing Moving Out, there’s certainly plenty to overcome – it’s the crazy nature of doing the job with someone else, and with someone else was exactly how I went into this preview opportunity with Moving Out.

It was recommended that I bring a buddy, so, partnering with Ryan Betson of The Popculturists we tackled the seven different levels made available to us in this vertical slice. Amongst the most impressive things that I took from our time with the game was the incredible diversity amongst the very small number of levels we had available. Of those available, there was only the one core objective (pack all items into the moving truck ASAP) but the constraints placed upon us in each level differed. Of the levels made available to us we had scenarios where we simply needed to load up as quick as we could, and in others, there was more of a memory puzzle at play where through multiple attempts we would need to learn the patterns of the world around us and respond accordingly. Both types were wonderfully balanced so that inexperienced players could pick up a controller and experience success fairly quickly, but those in pursuit of a greater challenge will need to frequently reflect upon their approach and perfect their communication as a team to coordinate in such a way that will result in a gold medal rating.

As we progressed deeper through the demo, it becomes apparent that simply tossing items into the truck and running off will no longer work if you’re chasing the top scores. Taking some time to assess the situation before you begin will be critical, identifying the larger items and dragging them on the truck first should become the priority as they’ll become significantly harder to throw on top of other objects later on if you’re haphazardly roosting things into the truck. Once those bigger objects are in, then you’re in a better position to grab the small, single person items such as boxes and toasters that can easily sit atop the whitegoods, couches, and beds. Strategy is as key to the Moving Out experience as anything else, and it’s strategy that’ll help you to overcome some of the greater challenges in the game, such as loading the truck from a moving plane or by weaving through a traffic jam (both challenges we faced), even down to simply loading up in the shortest space of time.

Though still far from release, (SMG are shooting for a 2020 release), the act of being a F.A.R.T (I’ll leave you to work out what that acronym stands for) is well polished and refined already. The controls are snappy, each location is vibrantly coloured and the items you’re supposed to move are *largely* easily identified, though grabbing incorrect pieces of furniture is something they clearly want you to do in the heat of the action sometimes, making for a very enjoyable, though challenging, playing experience. There are little UI issues that are still being worked on, from the player indicator that can obstruct your line of sight from time to time, or even the scaling of the screen as multiple players head in differing directions and the camera zooms out to accommodate. The one thing we couldn’t account for was single player. What will it be like (if it’s even possible) to play it alone?

Comparisons to Overcooked are inevitably going to arise, and justifiably so, but the core experience is so solid, and to be compared with Overcooked, or its sequel should be considered something of a compliment, that SMG should continue to lean further into what it’s doing, both stylistically and mechanically. Moving Out is shaping up to become a fantastic final product, courtesy of what we played this week. Based upon the things that at this point, have only been visible in trailers, and what we recently played, it is clear that Moving Out is a game that needs to be at the forefront of your radars going into the new year.