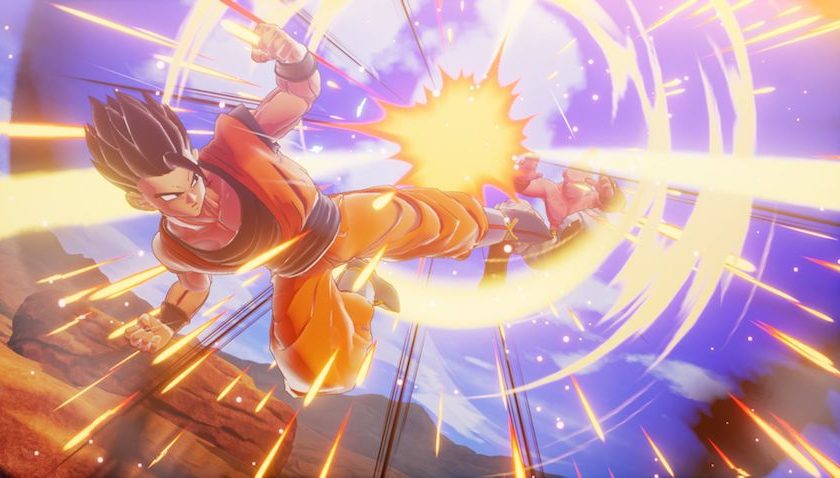 For Australians of a certain age group, Cheez TV was an institution, a gateway to anime like Dragon Ball Z when accessing such titles was practically impossible, especially for those of us living in rural areas on dial-up internet connections. For myself and my brothers, we would tape each episode for viewing that same afternoon, lest we miss the school bus. As with many shounen anime, whatever hits you at the right age seems to stick – contemporaries like Naruto and One Piece never grabbed me in the same way, and hold no nostalgic sway. When the opportunity arose to review Dragon Ball Z: Kakarot, a game that seemed poised to deliver the exact kind of DBZ meets GTA fever dream my 14-year-old brain fantasised about amongst friends, I jumped at the chance.

The main draw for Dragon Ball Z: Kakarot is its retelling of the DBZ storyline, from the Saiyan Saga all the way through to Buu which would otherwise clock in at almost 300 episodes of television. This aspect of the game is a boon given narrative and audiovisual presentation are the strongest elements of DBZ:K, each story beat, character appearance and musical cue or sound effect like an arrow through my nostalgic heart. Akira Toriyama’s designs are rendered exquisitely and the faithfulness to the anime series is beyond reproach, allowing players to feel like they’re exploring the version of Earth that DBZ presents. The attention to detail is quite impressive, with a number of in-jokes and references to earlier series Dragon Ball rewarding die-hard fans for their devotion. However, while the aesthetic side of the game is truly wonderful, what developer CyberConnect2 and publisher Bandai Namco delivered is in many ways exactly what I wanted when I was 14 – now 20 years too late. While the cel-shaded visuals and anime authentic audio go a long way to endearing the player to the experience, the fact of the matter is that many of the mechanics and systems feel incredibly dated, built around an ‘open-world’ design that feels plucked straight from the PS2 era and shoehorned into a current generation game.

Playtime spent in DBZ: K falls roughly into one of two categories: traversal and battle. If I’m not flying around the map looking for items or moving towards the next mission, I’m battling enemies scattered about the place or destroying enemy bases. Despite touting side-quests and other activities like hunting, fishing and cooking to keep players occupied while they revisit the adventures of Goku and friends, these often resolve as little more than glorified QTE’s, fetch quests or simply more battles. As the story progresses, a wider range of activities become available; car races, battles with high level foes, searching for the Dragon Balls, all of which are exciting the first few times and eventually resolve into rinse and repeat padding that too many open world games seem filled with for the sake of a ‘playtime’ quote on a box. The issue is that none of it is particularly entertaining or rewarding, especially compared to the pull of the main storyline and its stylistic battles which, while engaging, will likely disappoint those looking for a deep combat system following fighting focused titles like Dragon Ball FighterZ.

Battles in DBZ: K are often spectacular to watch, capturing the intensity of the series as well as the literal explosiveness of strikes, blocks and special moves albeit with a lack of finesse that can be occasionally frustrating to play. While simple, the controls and the way characters move doesn’t always feel consistent, most notable when flying which can often feel awkward thanks to the default control scheme which can’t be remapped. The combat system is deceptively simple and is really a brawler at heart, focused on short combinations followed up by skill attacks while dodging enemy attack patterns. Bizarrely, the flow of combat is often interrupted by the use of special attacks which take a moment to register and execute, sticking out like a sore thumb compared to every other facet of the fighting system which otherwise runs together smoothly. Very quickly the combat in DBZ: K becomes second nature, with only the most challenging of foes requiring some good old ‘lean forward focus’, while the ability to use healing items mid-fight ensures the majority of encounters are a breeze. One small frustration is that fights that were canonically lost by a character in the series don’t end as such, simply stopping at a predetermined point before a cutscene kicks in showing the subsequent ass whooping they received. While it’s possible to engage in many fights around the map, it appears as though the Experience Points received are somewhat scaled and over levelling a character requires grinding that few would commit to. The levelling system and story progress are both tied to the skill system – while most skills are tied to character levels, many require story progress to be made before they can be acquired. These are purchased with Z Orbs, a currency which comes in different colours, each corresponding to different characters. For example, Goku needs red Z Orbs to unlock his skills while Gohan requires blue Z orbs. The cost for each ability or attack starts out small but quickly balloons into large amounts, ensuring that completionists will be frequently in battle or roaming old areas on the map to gain the required amounts. Others attacks require fighting specific battles at a Training Ground before unlocking at a cost of D Medals, another currency obtained through battle, questing or exploration. Believe me when I say this is not as complex or confusing as it sounds, but may cause some to scratch their head given the frugal amount of in-game tutorialising around many of these systems, another of which is the Community Board.

The Community Board system is an interesting one, giving players bonuses to certain skills or increasing stat percentages by placing Soul Emblems – tokens representing a character – on a board. Soul Emblems are obtained after significant interactions with a character, whether it be via a main story mission or side quest, with each character predisposed towards one or more of the seven communities. By giving gift items to a Soul Emblem, they can have their community stat raised up to a maximum of 25, while some maximums are as low as 3 for boards they shouldn’t really be placed on. Putting strong fighters like Goku and Vegeta on the Z Warriors Community Board give boosts to Attack and Ki, while Master Roshi and Yamcha, better suited to the Adult Community Board, increase item sell prices and drop rates. Certain combinations of characters on a board will also trigger bonuses, a reward for fans who revere the canonical relationships and events between them. This is an interesting diversion but doesn’t have a massive impact on play until later stages of the game when Soul Emblems have been maxed out with gifts and each Community Board is giving out the highest bonus levels.

At its core, Dragon Ball Z: Kakarot feels like a game brimming with promise but hampered by time and budgetary limitations. While many of the foundational elements of a great new subseries are present, there simply isn’t enough cohesion between them to result in a top-tier title and the aged nature of its open-world means that it can’t stand alongside many of its contemporaries in the genre. As a Dragon Ball Z game, it’s an easy recommendation to fans of the series who would like a time-effective way to relive it, provided they focus on the story missions alone and can forgive or forego some of the creakier parts of the open world. Nostalgia is a hell of a drug, and while I remain critical of some of the choices made in development, my rose-tinted scouter definitely helped smooth out some of the rough edges, so I find it difficult to recommend as an entry point to Dragon Ball Z itself. I think CyberConnect2 is on to something here, and I hope they are given the time and budget necessary to deliver a sequel that fulfils the promise Dragon Ball Z: Kakarot shows.