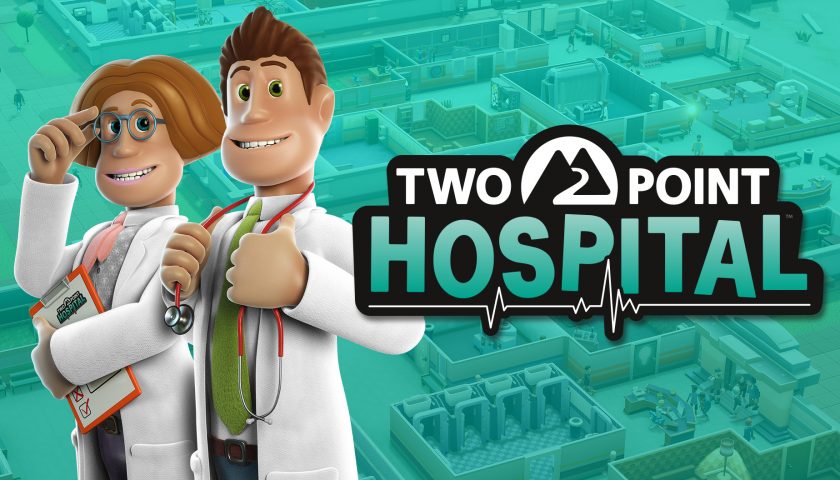 I smiled the moment I started managing my first hospital in Two Point Hospital, and I don’t think it has left my face in the many addictive hours since. There’s something about the humour that elevates it to a point just above that of dad-joke. For instance, a patient suffering from light-headedness will have an actual glowing light bulb for a head. Or the epidemic of mock stars that inundated my second hospital, an affliction requiring psychiatric treatment whereby the subject dons a yellow jacket, adopts a severe overbite and caresses a portable microphone, constantly pulling Freddy Mercury poses. That the diseases you treat are so silly doesn’t change the fact that they must be cured, and much of the enjoyment of Two Point Hospital comes from the unfamiliar-yet-analogous medical rooms and machinery that you must build in order to service all different types of diseases.

Things start out simple enough. A reception desk, then a GP office and a pharmacy. It’s not long, however, before patients start filing in and piling up and your money starts running low. Then staff start to take breaks and there are still 20 days until new ones can be hired. And you really need to spruce the hospital up to keep both patients and staff happy and… jeez, this hospital business is not easy! A clogged toilet can be just as disastrous as an AWOL psychiatrist. And when patients start dying, their ghost leave puddles of ectoplasm behind! It really can spiral out of control.

Thankfully, there are a few things that help align gameplay in your favour. The first is the ability to pause the game. This then lets you build rooms, hire staff, assign said staff and generally micromanage everything while the whole world is on pause. This gives you breathing space if things start to feel out of hand. The second is the ability to take out a loan. This seems to have little consequence on your rating, if you siphon any extra funds back to paying it off, once you get on your feet. Loans can help you expand to new land lots quickly, thus getting ahead of demand and being able to reap a sweet profit. That’s the plan, anyway.

Two Points structure sees you open subsequently more and more complex hospitals, with higher goals added each time in order to unlock your promotion to building and managing the next one. Each new move ups the scale, adding new complications to the mix and making you wonder why you agreed to take on this job in the first place. But really, it’s a lot of fun, and very satisfying to watch your hospital running reasonably efficiently.

I still can’t resist micromanaging, so I won’t wait for a janitor to hear the call for a machine repair and slowly waddle her way there. I’ll pluck her up in the air and plonk her down in the room, forcing her to start work immediately. With other staff, I found early on that staff breaks were leaving rooms and stations unattended. Rather than hire new staff, I was plucking the on-call doctors out of the break room and putting them back to work. I did learn, though, that this doesn’t help staff morale and so I started to hire extra staff and monitored the shift changes between them. I still had a lot of “looking for work” nurses and doctors wandering about, but once staff training entered into the mix, it becomes a valid way for overflow workers to spend their time.

The design of the game, the way it leads you from low to high complexity, is just perfectly paced. The controls feel great and the visual information is spot on. I can tell at a glance if things are running smoothly and hovering my cursor inside a room brings up numbers over the heads of patients waiting for appointments in that room. This helps me plan how many waiting benches I need, how many snack machines, magazine racks and so on.

My only real complaint with the Switch version is the text size. It is quite small, requiring a screen-to-the-nose at times. There’s no option to increase text size in the options, which I think needs to be mandatory for Switch titles. The whole point of the console is portable play. This said, I have gotten used to the font size, and to the game’s credit the font used is extremely crisp, clear and legible, so it’s not as much a problem as it could be.

Graphically, the game looks great, with the ability to zoom in quite close to see the cute models that look like a cross between The Sims and Wallace & Gromit. Performance is flawless on the Switch and I have also been impressed with how little the game has drained my battery while playing. Overall, I can heartily recommend this on the Switch. The quick-save feature makes it easy to pause at any moment, while the addictive nature of the gameplay threatens to draw you in for extended handheld sessions.