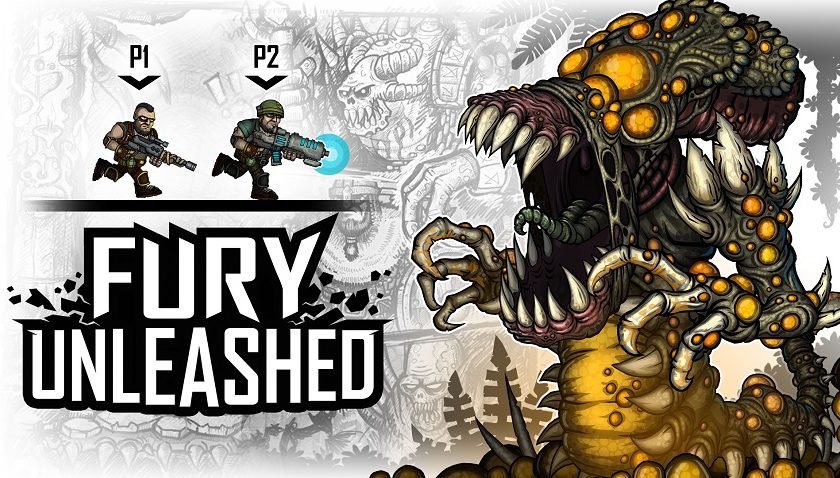 Remember what the ’80s and 90’s movies were like.  One guy facing down armies all by themselves, cutting a swathe through enemy soldiers on their way to save the world.  Fury Unleashed, from Awesome Games Studio, is a rogue-lite action-platformer that puts you in the role of this one-man army, taking on undead Aztec’s, Nazi’s with futuristic weapons and Aliens looking to invade the Earth as you blast your way through three different comic books in a bid to save your creator from his own mind.

The first thing I want to say is that I had a lot of fun with this game.  It is not easy, in fact even on the easy difficulty setting I still had trouble making my way through the game.  It made it a challenge of perseverance to start all over again when I failed.  I have never really gotten into a rogue-like game before, usually, I start them and play for a little bit before giving up in frustration.  Maybe it is because I am the sort of person who wants to see a tangible progression to the game I am playing.  Maybe I just had not found the right one, because I relished the challenge that Fury Unleashed gave me.  Every time I started again I managed to get just that little bit further along, to the next chapter or to the next comic book.

While Fury Unleashed is one of those games that is hard to beat by design, the developers also made sure that it is a game that is accessible to players that may not have the sadistic traits that get a thrill out of failing over and over again.  The easy mode can be modified anytime from the pause menu, allowing the player to further adjust the difficulty by changing enemy health levels and enemy damage levels amongst other things.  Admittedly I had to utilise these settings to see the ending of the game, partly out of the necessity to complete the game for this review.

The other reason that I wanted to finish the game was that I was invested in the story.  As you make your way through the different comic worlds of Fury Unleashed, ‘The Monolith’ provides you with snapshots of what is going on with your creator.  In reality, ‘The Monolith’ is just the creator’s smartphone, but it allows you to see someone who is burnt out and questioning his life’s’ work after putting his heart and soul into the project.  It is up to Fury to journey through the pages of his three greatest adventures to help bring their creator out of the funk that threatens the end of the run of stories in the Fury Unleashed comic books.

The comic book motif is not just a part of the storyline either.  Each chapter is laid out just like a double-page spread in a comic book, and each world transition corresponds to a panel on that page.  Not content with going left to right, the comic world in Fury Unleashed will have you going in any direction in the procedurally generated levels.  Fortunately, if you find yourself at a dead end there is a fast travel system that can return you to any panel you have already visited.

Rather than force you to start the game from the beginning every time you die, instead, you can unlock the option to start in the later comics.  This comes with a couple of caveats though.  To skip a comic you need to have played through and defeated the three major bosses of that level.  Skipping comics will also leave you at a significant disadvantage as you start with the same basic weapons as you would when starting fresh, making it harder to kill enemies until you find yourself a new weapon.  It is the risk versus reward.  Yes, you can jump a part of the game but is it really worth it to do so?  Ultimately it is up to the player but I always found it a better experience overall to start from the beginning every game, picking up better weapons and upgrades for the later levels while maximising the amount of ink you get to level up Fury and upgrade their skills, giving you more of a chance of beating the game.

There was only one thing that bugged me during my time with Fury Unleashed.  As I mentioned before, this game is designed to be hard to beat, and most times you will only have the one attempt before having to start again.  However, twice I was fortunate enough to find an ankh in a chest, resurrecting me after my death.  Now, this is a useful item to have, especially if you have been having a good run and have made it pretty far in the game.  Except that if you do get resurrected all of your armour and weapons are gone, replaced with the basic weapons you start the game with.  Now if you are in the middle of a big tough boss fight, it is almost pointless trying to fight with the most basic weapons.  It is only a minor flaw overall, but it feels like the second chance to continue the run is wasted by the loss of all of your gear.

For a guy that does not normally play rogue-like games, Fury Unleashed drew me into its vibrant comic book world and left me feeling like an old school action hero.  With an easy to grasp control scheme, challenging levels, and a nice rock soundtrack, it was a game that was easy to keep coming back to.  Fury Unleashed is one of those games that you can play for hours straight, or in a small thirty-minute burst while killing time.  No matter how long your session is, it will keep you wanting to come back for more.