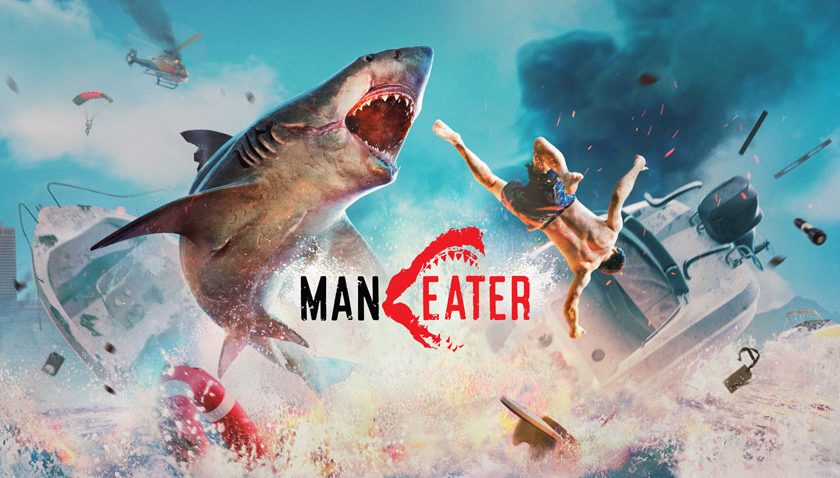 Every so often a game comes along that is exactly what you needed to play, whether you knew it or not. Having walked away from many ‘open-world’ titles in recent years due to ever increasing map sizes and obnoxious ‘collect-a-thons’, Tripwire Interactive’s Maneater has managed to rekindle my love of both with its razor-sharp focus and sense of humour.

How does one present a story from the perspective of a ferocious Bull Shark pup? The simple answer is to disguise it as a cheesy in-universe cable TV ‘docu-series’ called ‘Sharkhunters vs Maneaters’, narrated by Chris Parnell of SNL fame. For character motivation, you also set up a revenge plot against antagonist Scaly Pete, a Cajun hunter responsible for cutting the pup out of its dying mother and tossing it overboard to the mercy of the bayou. It might sound hokey (and it is) but Maneater takes at most a dozen hours to complete, ensuring that the entire premise doesn’t outlast its efficacy. The writing tone and Chris Parnell’s earnest and enthusiastic delivery also help to carry the concept throughout, still wringing chuckles out of me up to the credits.

It’s a long-held belief that underwater levels in games are just the worst, up there with escort and ‘stealth tailing’ missions in the list of things that are almost never fun to play. Tripwire has done a great job in ensuring that Maneater’s underwater environments feel satisfying to explore, each of its eight areas visually distinct from one another and with just enough hidden passages and collectables to motivate without overwhelming. From the murky, alligator-infested waters of Fawtick Bayou to the intimidating vastness of The Gulf, I was eager to search out the license plates, caches and landmarks which dotted the map. The landmarks are easily the collectable highlight as they embody a famous pop culture reference, most of which are cleverly done so as to ‘resemble but be legally distinct’. The missions are a uniform set which repeat in each area – start out by hunting humans and smaller marine life, usually while larger predators are encircling them to complicate matters, before taking on bigger targets and finally going head to head with the ‘Apex Predator’, a high level, unique skin of the area’s toughest regular foes. Story progress is also linked to ‘Infamy Rank’, similar to the ‘Wanted’ rating in the Grand Theft Auto series whereby causing death and destruction to humans and their property unleashes successively stronger waves of Sharkhunters before a unique ‘Bounty Hunter’ will appear. Once they are defeated, an upgrade is unlocked along with higher-level shark hunters, up to a rank of 10.

If these gameplay loops sound repetitive, it’s because by and large they are – the actions you take in each area are almost identical but are fortunately offset by an RPG-lite progression system and Maneater’s relatively short playtime. Alongside levelling up and unlocking a larger form every so often, three different sets of ‘gear’ can be unlocked and equipped which Maneater refers to as ‘Evolutions’. Materials gained from eating humans & various marine life, completing missions and finding collectables are used to upgrade the tiers of different gear, with set bonuses also applied. Divided into ‘Bone’, ‘Shadow’ and ‘Bio-Electric’, each set is designed to suit different styles of play and also completely alter the look of the Bull Shark itself. One slight issue I found during my playthrough is that, because of the very limited nature of the combat in Maneater – which boils down to ‘dodge enemy attack, stun/attack enemy, rinse & repeat’ – the different Evolution sets scarcely altered my playstyle and I ended up going with the ‘Bone’ set due to its impressive aesthetic over any stat boosts. The power curve in Maneater also affects the pacing, with the first two areas especially requiring a much slower approach due to the relative weakness of the Bull Pup, while the last few areas saw me dominating any and all competition which, can I stress to certain other developers who would have saw fit to include level-scaling to drag out the experience, is in fact incredibly satisfying. Plus, where else can I launch a 9-metre-long Bull Shark out of the water and into a crowd of unsuspecting golfers?

Maneater, when measured against other much higher budgeted titles will invariably fall short. It’s “only” a dozen hours long and built upon fairly repetitive gameplay loops. There is no multiplayer mode or microtransactions to speak of, nor any mention of DLC.  Instead, Tripwire has crafted a fantastically balanced experience that knows when enough is enough and is genuinely funny, something many games aim for but so few succeed in reaching. Maneater is an ideal palate cleanser for those suffering from ‘open-world’ fatigue and, despite its perfect size, still left me wanting more.

Maneater was reviewed on an Xbox One X with digital code kindly supplied by the publisher.