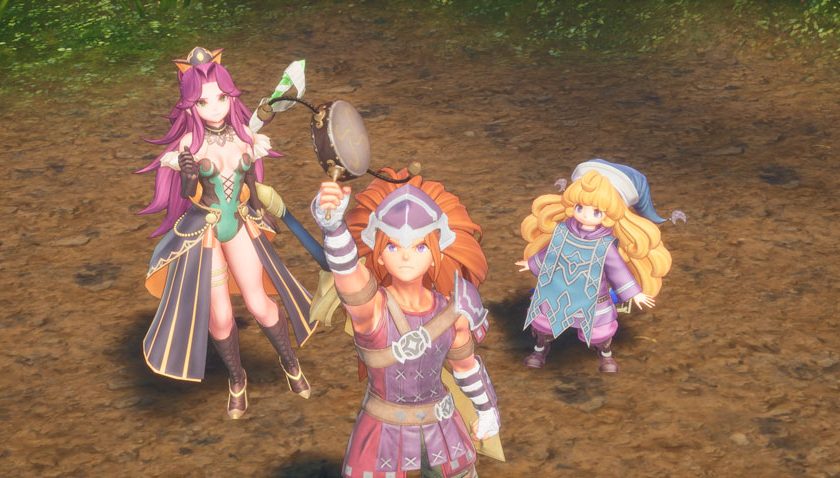 Coming hot on the heels of the biggest remake of the decade, Trials of Mana launched on the PlayStation 4 and Nintendo Switch with substantially less fanfare that FFVIIR in Australia, and with good cause. Originally titled Seiken Densetsu 3, Trials of Mana released in 1995 as a Japan only SNES title from Square (now Square-Enix) going without an official English localisation until last year when it was included in the Collection of Mana for Switch. It’s safe to say that Trials of Mana is unlikely to be approached with the same level of reverence by players but it’s important that its origins as a SNES title, albeit one of the most advanced for the system, be kept in mind – while Trials of Mana plays the part of a modern Japanese ARPG, under the hood is the beating heart of the 25-year-old original.

Trials of Mana focuses on the struggle between six heroes and dark forces which threaten to put their world in jeopardy, the specifics of whom depending on which hero is chosen as the main playable character, alongside two companions. The overarching story regardless of character selection involves the fading of Mana in the world and the impending release of the eight sealed ‘Benevodons’, terrible creatures with extreme destructive powers – naturally, the villains intend to subvert this power for their own gain. While simple by modern standards, it’s not a slight against Trials of Mana to say so because of the brisk pace at which everything moves, a refreshing concept given the increasingly bloated nature of the JRPG genre in recent years. Plot points and areas rarely overstay their welcome and, aside from a few sections that lean heavily on the idea of a ‘boss rush’, it’s quite possible to explore multiple locations and make considerable story progress in an hour or two which, for anybody struggling to find the time for modern JRPGs, feels incredibly rewarding. That said, it’s not all smooth sailing and a few awkward moments in Trials of Mana arise out of the creaky seams that many games of the SNES era displayed. Boss battles will occasionally end with little to no fanfare and occasional abrupt shifts in story tone make it obvious that giving players a choice from six playable characters doesn’t facilitate the smoothest of narratives at all times, with the sense that not all of the combinations were created equally.

Trials of Mana is refreshing to look at, sporting a colourful palette that reminded me somewhat of Ys VIII, where even the ‘spooky’ areas have a bright, cartoonish tone to them. Characters are detailed and battle animations are smooth if a little unsophisticated, with a small variety of enemies and some palette swapping in the late game an authentic relic of its SNES origins. Similarly, while not up there with impeccable work of the Falcom sound team, Trials of Mana’s remastered soundtrack surges alongside the action, adding mood to each area and encouraging players to complete combat encounters as swiftly as possible, aided by experience bonuses rewarded for the same feat. The English VA however ranges from inoffensive to insufferable, not just in directed delivery but also audio quality. This inconsistency led me to shift to the Japanese language track, which made particular characters less annoying – I’m “wooking at wu”, Charlotte. There isn’t a great deal of spoken dialogue throughout the game but it remains one of the weaker areas overall.

Performance wise, moment to moment gameplay is very snappy and responsive which is ideal for a title that features as many combat encounters as Trials of Mana. There are certain rhythms the game falls into over the course of its 20-hour runtime, the most notable of which is exploration of a large area swarming with enemies who stand between the player and the next boss encounter. In fact, an extremely large portion of Trials of Mana is this exact loop repeated over and over, which is why it’s such a relief that its action combat is so satisfying to engage with. Building up your party, working to their individual strengths and swapping between them often during encounters is critical to success, although the party AI manages to hold its own to a degree. At key junctures in the game, it becomes possible to shift classes which is where I noticed some of the biggest boosts in character performance, more so when these choices allow finer tweaking of an individual character’s role in the party in terms of attack, healing or support. One element I found surprising was the frequent and sometimes lengthy load times on the PS4 Pro which seemed at odds with the size and scope of many areas, perhaps a side effect of budgetary constraints placed upon developer Xeen.

Perhaps the biggest compliment I can pay Trials of Mana is how much it impresses me retrospectively. While I’ve had a great time blasting through it in 2020, I can only imagine how forward-thinking and impressive many of its systems and mechanics would have been in 1995. For fans of more modern entries in the genre like Kingdom Hearts or recent titles in the Ys or Tales series, Trials of Mana is a chance to discover a missing link which stays true to its 16-bit roots while improving the experience in numerous ways.

Trials of Mana was reviewed on the PlayStation 4 Pro with code kindly supplied by the Developer.