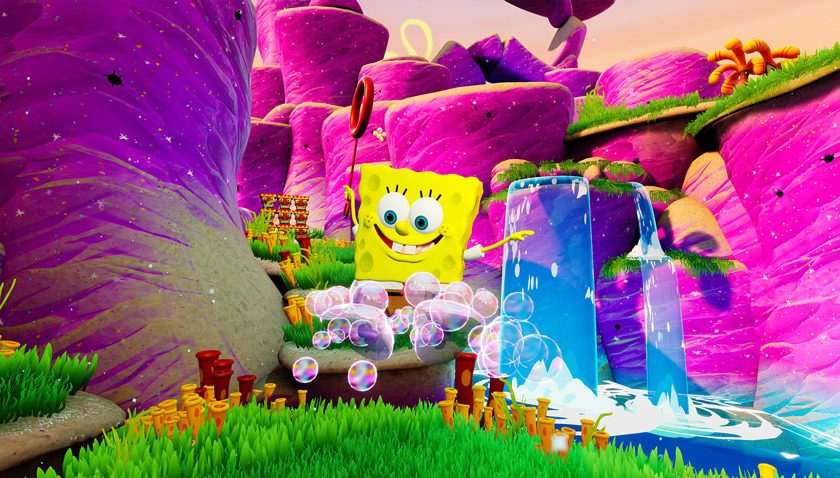 Rehydrated is a somewhat odd proposition; a ground-up remake in the Unreal Engine 4 by developer Purple Lamp Studios which, outside of some cut content and a tacked on multiplayer mode, is almost slavishly deferential to the original release, a decision which boggles somewhat almost three console generations onward. For those who never played the original, Battle for Bikini Bottom sees titular hero SpongeBob and his pals Patrick and Sandy tasked with stopping a rampaging horde of robots that are spewing out of the evil Plankton’s shabby Chum Bucket restaurant, yet another of his plans gone awry. It’s a decent enough setup and provides ample opportunity to visit many of the show’s most famous locations while interacting with other principal cast members like Mr. Krabs and Mrs. Puff as well as Mermaid Man, Barnacle Boy and The Flying Dutchman. As with the original release, there’s very little here for those not already partial to the sense of absurdist humour late creator Stephen Hillenberg brought to his underwater world, trading as it does on an affection for and familiarity with the source material. As a lapsed fan of the series which I now occasionally watch with my son, both the story and visuals won me over quite quickly given the upbeat nature of SpongeBob and co., taking me back to a time before most 3D platformer mascots had to become slightly edgier to appeal to their ageing audience.

Rehydrated plays about as well as any 3D collect-a-thon platformer of the PS2/Xbox era did, with basic controls and challenges that range from easy to mildly frustrating, veering more into issues with execution rather than solving the problem at hand. The bright, clean visuals are a significant improvement over the washed out look of the original game and stand much closer to the TV series itself, something Purple Lamp Studios should be commended for. The many locations are broken up into shorter levels rather than expansive areas, often coupled with strangely lengthy load times between them, an issue that seems surprising given the modest scope of the title. One minor issue I found was the ease at which I would mistake what should have been an ‘Out of Bounds’ area for legitimate play space, especially when many of them are visually identical to their surrounds and easy to navigate to. More than once, I was forced to restart a section of a level after getting stuck somewhere I apparently wasn’t supposed to go, my only option to fast travel via the menu. That aside, my biggest grievance with navigating the world of Bikini Bottom and its surrounds comes from the frustrating inability to shift characters on the fly, instead relying on sparsely placed ‘Bus Stop’ locations throughout levels which feels like a way to pad out the proceedings rather than a conscious choice made to improve gameplay in the original, something that could have easily been reworked in this remake. Both voice acting and music are delightfully on point, with the majority of the original voice cast brought aboard to reprise their roles. On a sadder note, the original release failed to secure both Clancy Brown (Mr. Krabs) and Ernest Borgnine (Mermaid Man), the latter of whom passed in 2012, with a poor imitation substituted in their place. While it’s understandable that little could be done about giving Mermaid Man his true voice back, it’s a touch disappointing that Clancy Brown wasn’t brought on for this release to do Mr. Krabs justice.

SpongeBob SquarePants: Battle for Bikini Bottom Rehydrated seems directly targeted at those with a real nostalgia for the original game. Improved visuals and audio aside, it’s hard to recommend to a new audience when the platforming genre has had some truly outstanding remakes these past few years, let alone new entries. I wonder if there wasn’t some licensing deal about to lapse which prevented the development time needed for a new SpongeBob game, especially with a new film on the horizon? Whatever the case, Rehydrated is solidly executed and will appeal to much younger SpongeBob fans and their parents in search of something age appropriate or, more likely, those wanting to revisit the heady days of early 2000’s SpongeBob mania that, thanks to a solid glow up, looks and sounds “how you remember it”, not how it was.