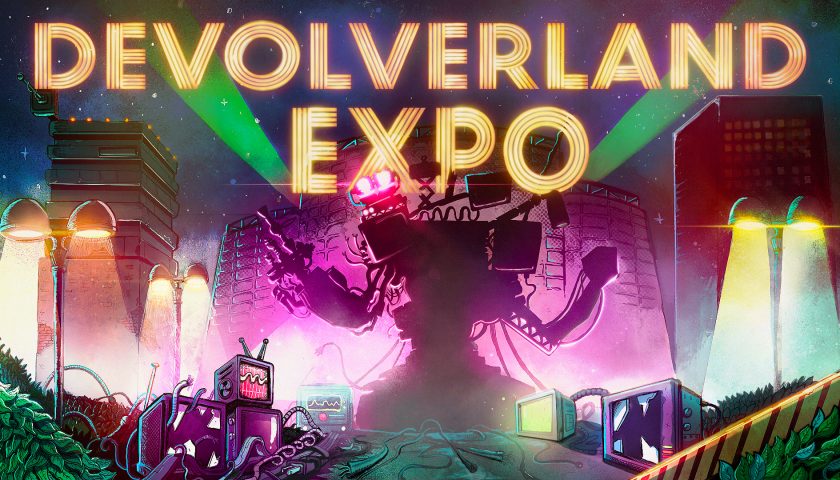 Devolverland Expo Blurs the Line Between Game and PR

If there’s one publisher that has managed to maintain its “little guy rising through the ranks, hey we’re still cool and not totally morally corrupt” brand, it’s Devolver Digital. Known for doing things differently, Devolver’s irreverent and strange approach, combined with an ability to back quality titles, has seen them grow into a real dark horse in the industry – or at least a dark horse drenched in blood, running through the streets with fireworks exploding from its back while a rider balances on a skateboard firing bananas at drone targets!

To coincide with their Devolver Digital Direct (or D3), Devolver has also launched Devolverland Expo, described by the publisher as, “the most advanced marketing simulator ever designed by humankind. Conceived, created, and filled with contempt by Devolver Digital CEO Nina Struthers during this year’s fourth-wall shattering Devolver Direct, Devolverland Expo takes all of the in-your-face stink and discomfort, pomp and circumstance of a crowded high-rent convention hall and stuffs it – for free – into the general public’s sweaty, grateful paws. You’re welcome.”

It’s billed as a “marketing simulator” and is available to download and play from Steam right now. Presented inside an abandoned convention centre setting, you are tasked with breaking into the convention centre and avoiding security systems to watch trailers from the games featured in the Direct, as well as source other collectibles.

We are yet to check it out, but it sure is a different way to present your upcoming products. In case you were living under a rock (or your pillow), the games showcased in the Direct were Shadow Warrior 3, Olija, Fall Guys, Carrion, Serious Sam 4, Blightbound and Weird West.