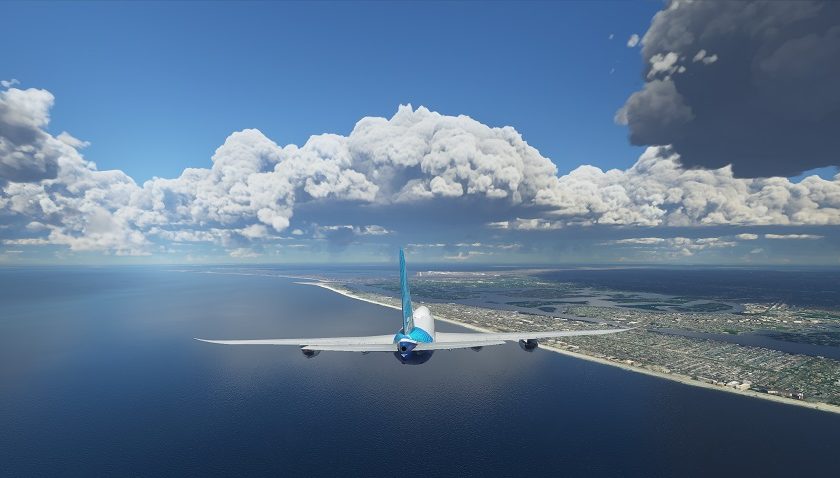 Reviewing a game such as Microsoft Flight Simulator is a tough task. The main problem a reviewer comes across is the fact that it isn’t really a game. It is an experience, a recreation of an activity that has been around for 100+ years in some form or another. This isn’t a title that wants to you reach an endpoint, conquer a story or score achievement points (though there are achievements for those that crave them), this is a title that wants you to just…do. Microsoft Flights Simulator is, at its heart, a title that wants you to experience the joy of what many dream of, but only a few achieve, and that is the joy of flight.

My history with flight simulators is pretty thin. My last experience with one was in the early 90s’ when they came 50 floppy disks and had a manual the size of the Yellow Pages. It was daunting and only the most committed prospective pilots ever broke through the massive learning curve. So you understand why I was a little apprehensive about diving into Microsoft Flight Simulator. Thankfully, my worries were unfounded as Microsoft wisely realised that not everyone wants to be an Ace pilot, some want to just cruise the skies as they see fit and have included a range of assists and guides to help everyone from the newest pilot to a real-world sky jockey. There is a massive range of settings to tweak and tutorials to explore to ensure the experience is one that is tailored to your skill and enjoyment level. That being said, there were still a few occasions I felt lost on what to do and had to google a few answers, but considering the complexities of flying a plane, the developers have done exceptionally well in creating a title that caters to the largest possible audience.

Once I had spent some time becoming accustomed to the basics I dived straight in. I picked myself a nice prop plane, set my flight pattern from Sydney to Brisbane and took to the skies. I flew in real-time the entire way, only popping auto-pilot on when the need for sustenance arose or I heard the call of nature. It took me a little over an hour to complete the journey, flying over a highly detailed Australian outback the whole way. There was something joyous in this activity, something serene. It isn’t a task I would want to do every day, but it is certainly one that would appeal when I just want to zone out, listen to some tunes and only zoning back in to fight some bad weather or land the plane. Speaking of landing the plane, this is the single most satisfying component to Microsoft Flight Simulator. I have been playing all weekend and I still get a huge sense of accomplishment every single time I land. It is clear that the developers understood this feeling because there is even a landing challenge mode that tests your skills by landing different aircraft at different airports in varying weather conditions, allocating a score depending on how you do. In what is almost the only “gamey” element of the title, scores are tracked on a worldwide leaderboard so you can see how your landing compares to pilots from around the globe.

I am sure you know by now, but Microsoft Flight Simulator is a technical tour-de-force. I am not exaggerating in the slightest when I say this is the single most impressive technical achievement I have seen in games since Crysis melted my computer all those years ago. It is hard to state just how amazing all the tech comes together to further increase the joy of flight. From the realtime weather taken from around the globe to the incredibly detailed landmarks and airports, to the stunning recreation of the planes themselves, there is nothing in this game from a technical standpoint that doesn’t impress. For example, last night I decided to hop in a Cessna, take off from Canberra Airport and try to find my house (about a 15 minute drive away). I was taken to the airport at night and there was an easterly wind with some light rain. Sure enough, when I went outside my house to double-check, there was an easterly wind with light rain. If that isn’t enough to impress you then I am not sure what will. Oh, by the way, I did find my house, though it didn’t actually look like my house, just a standard graphic of a house, but still very cool none-the-less.

Flying a plane is a technical challenge. Each plane is different and there are a host of systems, dials and settings to get your head around but Microsoft Flight Simulator does some very clever things to help out. The aforementioned difficulty settings and cues are one example, but perhaps the smartest thing it does is utilise a second monitor in smart ways. Looking at maps, contacting airport control towers, fiddling with the camera to taking awe-inspiring screenshots and checking out your flight plan all brings up a separate little window on your screen, taking up valuable screen space. So instead of constantly opening and closing these windows, you can simply pop them out and drag them with the mouse onto your second monitor. It is a stroke of genius on behalf of the developers and allowed me to have all of this important information available at all times.

Controlling the planes in flight is also something of a challenge, but one that is not insurmountable with standard gaming equipment. Microsoft Flight Simulator supports a full range of flight sticks, pedals and addons but they are not required. I found it was perfectly fine flying with an Xbox One controller and using the keyboard and mouse for the extra commands that couldn’t be mapped to it. When controlling the various planes it is amazing the differences you can feel through the controller’s rumble feedback. The light and dinky Cessna that you learn in shakes and rattles throughout your flight, while the jets and passenger planes feel smooth and dreamy. It is small details like these that continued to impress me throughout my whole playtime. The developers deserve all the plaudits they are going to receive because of this attention to the small detail.

It must be said that Flight sim games are not for everyone, in fact, they are usually for quite a niche market but with Microsoft Flight Simulator coming to Gamepass, (if you have a subscription and a beefy PC) you would be mad not to at least give it a go. To not do so is missing out on one of the most jaw-dropping technical achievements ever seen on a home system. Prospective players shouldn’t be afraid of diving in thanks to the excellent tutorials and difficulty options and flight enthusiasts should know that everything they expect from a flight sim is present and correct. There is no doubt that this is a game for the ages, one that will be played for years to come and you owe it to yourself to give it a try. Microsoft Flight Simulator is simply stunning, there is no other way to put it.