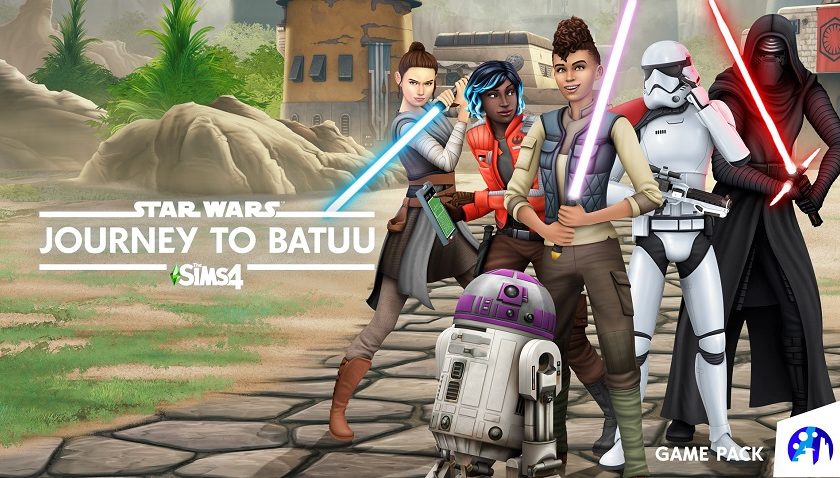 The Sims 4: Journey to Batuu – A Trip to Star Wars Camp

People have been creating Star Wars characters on The Sims for years – unofficially, of course. The modding community has always been very active when it comes to this beloved sandbox game, and where there’s a will, there’s a way – and there’s always a will for Star Wars. Approximations of some of the series’ hallmarks can be achieved using mods, or a little creativity – like clothing choices, or iconic hairstyles. But there are others that have been a little out of reach, like the ability to have a little droid friend or wield a lightsaber. The official Journey to Batuu game pack makes these things possible, bringing a Star Wars world to the game as a vacation destination, and with it, a whole heap of the franchise’s most beloved features. But if you aren’t a die-hard Sims fan looking to complete your expansion collection, or a Star Wars enthusiast who wants to absorb all the content related to the concept of the action-packed space opera, then is it worth it? Is it even worth it if you are? Well, that depends on what you’re looking to get out of it.

The world of Batuu is mentioned in a bunch of the Star Wars canon as a planet on the Outer Rim which used to be something of a bustling marketplace and stopover zone for travellers. The version of it being emulated in this game pack, however, is the version that went on to be included in Disneyland’s ‘Galaxy’s Edge’ Star Wars exhibit – and that kind of shows. The Sims version of Batuu has three districts that can be travelled to – the Resistance Encampment, where you can align with the resistance and aid Rey and Vi Moradi on the side of ‘good’, the First Order District, where you can buddy up to the First Order and help Kylo Ren enforce their oppressive regime, and the Black Spire Outpost, where sims of any alignment can take missions from Hondo Ohnaka (largely of Clone Wars and Rebels fame) and his Scoundrel buddies. Each of these areas acts as a hub world for their chosen faction, but completing missions will usually mean travelling between them, incurring load times and interrupting the flow of your adventure.

It’s a flow that’s hard to find. While there are a whole heap of new create-a-sim items that allow you to make your sims look like they’re from a galaxy far, far away, many of them are costume elements like hats your sim can wear without changing their actual physical attributes. Even many of the clothes they can wear can’t be worn outside Batuu, or have to be unlocked for each character by completing a series of missions for a particular faction. As far as I could tell, unlocking them for one character didn’t unlock them for new sims either, but it’s possible I did something wrong. It all just feels a little like your sim is playing dress up and going away to Star Wars camp.

And in some ways, that’s fine. There’s fun to be had at Star Wars camp. You can complete missions and feel like you’re aiding the side of your choosing in a galactic war, even though I didn’t see many overarching consequences of those choices, beyond how characters from different factions will respond to you when you’re in their areas. You can interact with iconic ships like the Millennium Falcon, and even have interactions with characters like Chewbacca as they help you on your missions. But these interactions are fleeting. You can become friends with Rey or Kylo Ren, but as far as I could tell you couldn’t romance them without hacking the game, and they certainly won’t leave Batuu. While you’re on the planet, you can use credits earned by completing missions to purchase a droid to take home with you, but that droid loses a lot of its functionality once its back on your sim’s homeworld. The droid, on Batuu, can help distract guards to allow you to gather information, it can follow you around happily beep booping, and it can develop a personality of sorts. But that same droid, in a regular sim world, will sit in the corner more like a toy. Your sim can chat with it, play with it, vent to it, but it won’t follow you around anymore, so it feels less sentient. That said, it did bring me joy just to hang out with my little BB and R2 droid and watch them run around on Batuu. They remain adorable at all times.

While on Batuu you can collect the parts to build a lightsaber for your sim, but the functionality of it is also limited. You can wave it around and duel with other sims, but given the force isn’t really a mechanic in this game pack, that’s kind of… it. Your sim will be able to obtain the Jedi tools, and aid (or oppose) the Jedi cause, but never really feel like a Jedi. Some of the magic is just missing. The locations feel nice, at a surface level, and it’s fun to be around sims that look like various Star Wars characters, but when you know that in order to make your sim look like that they just put a hat on, none of it quite feels real. For some, a vacation to Star Wars camp will be enough, but I’m not sure about the staying power of the pull of Batuu.

If you’re looking for a way to mess around for a few hours in a Star Wars-inspired world, you’ll have fun with this game. Plus, it’s still The Sims, and it is fun to put your sims in a new environment surrounded by new items and see how they react. But if you’re looking for something deeper, you’ll be disappointed by Journey to Batuu. There are a lot of things missing – like the ability to make 3PO droids or interact with the other droids on the homeworld, or complete meaningful missions that feel like they make much of a difference. But it’s a bit of fun. If it’s important to you, however, you should know that this expansion does not make it possible to make the characters from Spaceballs with any kind of accuracy, so if that’s your measure, then maybe give this a miss. For everyone else, it might spark some joy, but none that’ll last forever.