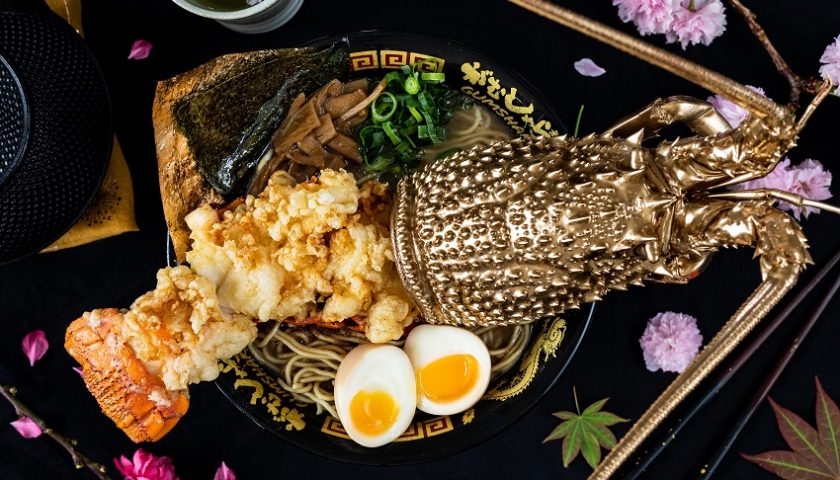 “You know what would make this better?”, I sometimes wonder to myself as I look up from my bowl of instant ramen. “A whole lobster”.

I wonder if those thoughts ran through the minds of those who dreamt up the wild idea of celebrating the upcoming launch of Yakuza: Like a Dragon with a $400 bowl of ramen.

And I got to be honest. I am curious as to what this would taste like. I love my ramen, whether it is instant, homemade or artisanal. And while some might ask why but I would respond… why not? Because lobster tempura, a pork and lobster broth cooked for 12 hours, plus all the usual trimming prepared by Chef Mori Higashida (owner and head chef at Gumshara in Sydney) sounds absolutely delicious.

And it certainly is in line with the outrageous nature of the Yakuza series, and its latest entry. This equally outrageous bowl of ramen will go to one lucky winner, along with a copy of the game and a custom-made Yakuza: Like a Dragon noren (a Japanese restaurant banner). 10 other runners-up will receive a noren and a copy of the game. For more information about how to enter this competition, head over to @XboxANZ on Twitter.

Yakuza: Like a Dragon launches on 10 November 2020. Full news release below.

Sydney, Australia – 20 October 2020: In celebration of Yakuza: Like a Dragon launching in the West on Xbox Series X|S and Xbox One with Smart Delivery and PlayStation 4, Five Star Games has partnered with famed Sydney ramen purveyors Gumshara to create the world’s most expensive bowl of ramen. Valued at AU$400 per bowl, the broth of high-end lobster, pork and noodles will be up for grabs via the Xbox ANZ Twitter channel from midday today until the game’s launch day – 10 November.

With a regular bowl of ramen going for anywhere between $8 and $30, this “Rags to Riches” ramen flies in the face of the traditionally cheap dish to reflect Ichiban Kasuga’s story in Yakuza: Like a Dragon as he rises from rock bottom after being betrayed by the man he trusted most. Each bowl of the Rags to Riches ramen is made from over 15kg of lobster and pork bones, was created by Mori Higashida at Gumshara to reflect the sheer madness and over-the-top nature of the Yakuza series.

Mori Higashida, owner and head chef at Gumshara, says of the expensive ramen: “Being given a chance to imagine such an over-the-top ramen dish has been fantastic, and I’m proud of what we’ve created. My wife is actually a fan of the Yakuza series of videogames, so I’m familiar with the craziness of the game and hope to have captured its essence in our own way!”

Managing Director at Five Star Games and Yakuza and ramen enthusiast Darren MacBeth, says of the partnership: “The Yakuza series has always led the industry for detailed storytelling and zany gameplay in videogames, and being able to partner with an authentic tastemaker in Gumshara has been a pleasure. Fans of the series will truly enjoy Ichi’s exciting new story arc and the RPG insanity, while culinary fans will enjoy a new paradigm of rich taste in the Rags to Riches ramen.”

Yakuza: Like a Dragon is the latest instalment in the Yakuza franchise and the eighth in the series to date. New protagonist Ichiban Kasuga brings with him a new style of dynamic RPG combat, whilst retaining the Yakuza series’ trademark style of spirit and wackiness as Ichi finds himself exploring Yokohama, Japan to uncover the truth behind his betrayal by his former yakuza clan.

The full list of ingredients in the Rags to Riches ramen are:

Partnering with Xbox ANZ to offer the dish as part of the major prize, the Rags to Riches ramen will go to one lucky resident of New South Wales along with a custom-made Yakuza: Like a Dragon noren (Japanese restaurant banner) and a copy of the game on the Xbox platform, while ten runners-up from around the nation will receive a noren and a copy of the game.