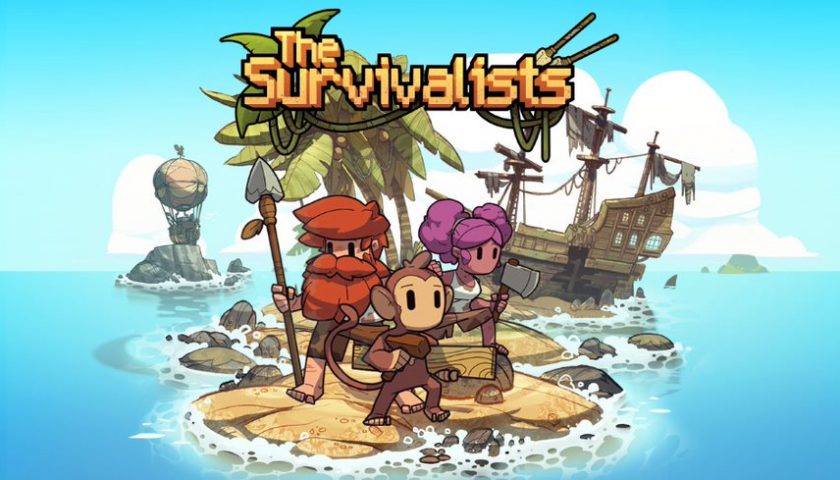 The Survivalists – Nothing But Monkey Business

Ever found yourself playing a survival game and getting bogged down with the monotonous busywork?  Chopping down trees, cooking food, building crafting stations and assorted personal furnishings.  Don’t you just wish you were able to spend your time exploring, looting ruins and vaults for gear and items that will help you in your journey?  Well then, you have come to the right place, my friend.  Pull up a chair and let me tell you about a little game called The Survivalists.

From Team 17, the same developers that brought us The Escapists, The Survivalists is the latest in a long line of survival games that places your character in a randomly generated world and leaves you to fend for yourself, well kind of.  As I alluded to in my introduction, The Survivalists gives you an easy method to avoid having to do the busy work of gathering resources and crafting your base in one easy method….monkeys.

Ever heard of the saying “a trained monkey could do that’?  In The Survivalists, they most certainly can for pretty much anything.  For example, if you don’t want to waste time putting stuff away in chests, just drop it on the ground and you can have a monkey pick it up and stash it in your different chests.  Can’t find the ingredients for a crafting blueprint because the previously mentioned monkey has no concept of organisation when placing items in chests (and really can you blame him, he is a monkey after all)?  Just train another monkey to grab the items you need.  Train the third one to craft things at the crafting table and another to build structures around your base and you are set.  Just dump the ingredients, pick what you want them to make and let them do all the work while you enjoy walking along the beach.  You can even give the monkeys the tools they need to harvest all the resources you could ever need.

However, there is another use for your monkey slaves companions that will come in very handy as you journey around the various islands.  Give a monkey a weapon, teach it to hit things and you have yourself a pretty nifty bodyguard.  Train six of them and you got yourself an all-powerful gang that kicks ass and chews bubblegum.  While I must admit there certainly are dangers to training monkeys to fight, I mean I have seen Planet of the Apes, in this instance, it certainly gets my thumbs up of approval as it allowed me to roam around completely protected by my primate posse.  Probably too well protected if I am to be completely honest.  The moment anything even gets close to me my primate posse strikes them down, rendering my combat contributions moot and leaving my character feeling slightly emasculated.  The feel of the combat is clunky as it is though, so while I may not feel like a true survivalist, letting my monkeys do the job themselves results in a much smoother overall combat experience.

Despite the overall advantages that a bunch of monkey companions bring to the table, there are still a few minor flaws that detract from the overall experience of the game.  While I understand the concept behind the three different build menus you make use of throughout the game, there were times that I simply forgot things existed purely because they were in a menu I didn’t frequent very often.  It was also slightly annoying having no way to know what I would unlock next in the crafting menus.  The only way to unlock something was to build the object in the tree before it, often leading to me building one piece of flooring or a fence to unlock the next piece.  The most frustrating moment came after I had built a raft and was ready to explore the other nearby islands.  I had my monkeys, I had a chest ready so I could easily transport any loot I found, the only problem was that I had no sail, rendering my raft useless until I found the way to build one.

The only other thing that caused me no end of annoyance came about as a direct consequence of my need to always travel around with my primate posse.  As you walk around your selected monkeys will follow you and just generally mill around your area.  The problem is that they will often be close enough that they are in the way of items you are picking up off the ground.  It is far too easy to be spamming the button to quickly pick up items when all of a sudden one of your monkeys is a bit too close and you suddenly take the weapon they use to protect you, giving them a coconut to hold instead.  It is a minor problem though, and something I am sure the devs will be able to patch out to make it a bit less frustrating for players.

While the difficulty level of The Survivalists is skewed a bit more on the easier side, especially when you are traipsing around the islands with a squad of monkey commandos, it makes up for its shortfalls with its inspired use of monkey labour, enabling those people who don’t appreciate the manual labour side of survival games to end up skirting around it completely.  It may not have a great deal of depth to offer, but it is a fun experience and a good way to introduce kids to the survival genre without the experience being too overwhelming.

The Survivalists was reviewed on the PS4 with code kindly supplied by 5 Star Games Australia.