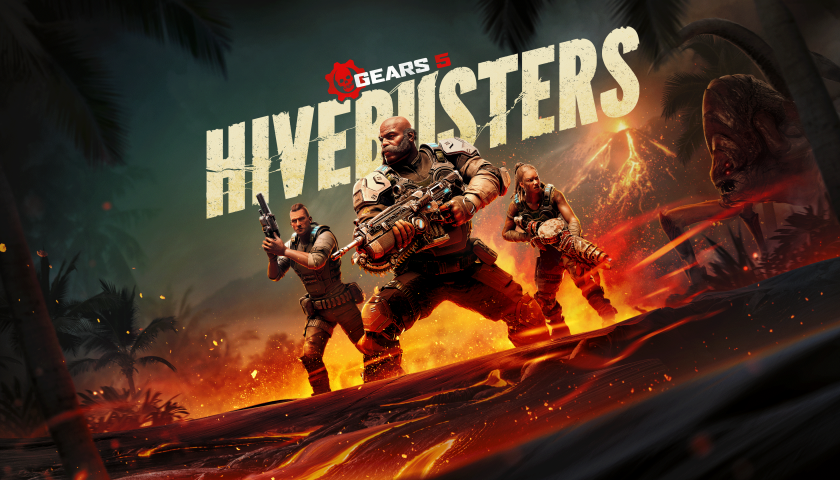 Gears 5 was a turning point for many core tenants of the Gears of War IP. 2019’s release asked players to adjust their expectations of the franchise narratively, as well as rethink the moment to moment action. Branching narrative pathways, and wide-linear/open-world hubs were important features present in the full Gears 5 release, something we’d not seen before, but Gears 5 has also introduced another franchise first – campaign DLC. Built on the foundations of Gears 5’s new Escape mode, which featured an all-new cast of characters, comes Hivebusters, single-player DLC featuring Escape’s own Keegan, Mac, and Lahni, in a brand new side-story to the core Gears story. Though the many evolutions of Gears 5 are absent in this story expansion, Hivebusters ultimately serves as a worthwhile narrative and gameplay experience for fans of the franchise.

Hivebusters is a 3 hour, six act campaign is a typical Gears story, one where protagonists Keegan, Lahni, and Mac are sent out to uncover a way to destroy the invading Swarm. Of course, there’s the usual conflict between those who hail from a COG background and those who don’t, so expect undermining of orders, questioning of authority, and more on top of the usual gunplay. Though billed as an origin story for the trio, there’s a level of familiarity amongst the members of Scorpio Squad from the getgo that does feel jarring at times. They’re an instantly cohesive team, something that is very hard to immediately generate in any context, let alone a war against a monstrous species. This cohesion flies in the face of the narrative, where each member is still getting to know each other and find their place in the trio. In spite of those inconsistencies, however, Hivebusters is an enjoyable, popcorn flick, an experience that will not cease to get the adrenaline pumping.

Beyond the action and the overarching narrative, there’s a darker, more somber side to Hivebusters as we come to learn more about Mac and his motivations. He in particular is grappling with the aftermath of a truly horrific event in his life and it fuels his current-day approach to the war. Lahni was separated from her Pahanu roots, and so upon returning for this mission her curiosity bubbles over as she seeks knowledge. The Gears franchise is known to get quite introspective at times, but usually having given players a game or two to form an attachment to the characters. Hivebusters hits you over the head with these harsh character backgrounds quickly, which may lead to some of these moments falling flat with some people while being deeply affecting for others. Keegan doesn’t get the same moments that the others do, making him the perfect foil, and vessel for the player to consume the narrative through.

Gear 5 introduced a host of systemic inclusions to the moment to moment gameplay. JACK could be upgraded, thanks to some lite RPG systems being added to the experience, and that approach has made its way to Hivebusters as well, though this time it’s the party themselves that benefit. Each of Keegan, Lahni, and Mac have unique abilities (ammo resupply, an electrically charged knife, and a wide-reaching defensive shield respectively), each of which can receive upgrades if you can find scattered, hidden stones throughout each chapter. Though you can brute force your way through encounters, and there might be added self-imposed challenge that some will enjoy from playing this way, leaning on these systems enhances the combat, by allowing The Coalition to pose more difficult scenarios in front of you, but also by giving the player more control over your party. Gone are the open-world inspired hub areas in favour of a more traditional, linear Gears experience as well.

Visually, Hivebusters is substantially different to the game it spawned from. Where Gears 5’s core campaign relied heavily on icy terrain, harsh red sand, Hivebusters swaps those out for tense island foliage and an active volcano for good measure. The island looks stunning and stands in nice contrast to the visual style of the core game. Meanwhile, the audio effects are of the same impressive level of the core game, and the voice-acting exemplary which, when combined with the look and feel of the environment, and the story being told, makes this mini-campaign immediately engaging.

The DLC’s shorter length does make the juxtaposition between heated, Gears action, and deeper, more heartfelt moments, feel a bit like the flicking of a switch, but the campaign itself is a must-play for fans of Gears. It makes some interesting steps forward for the IP, introduces a fascinating new cast, while the moment to moment is as thrilling as ever. Hivebusters shouldn’t be missed.