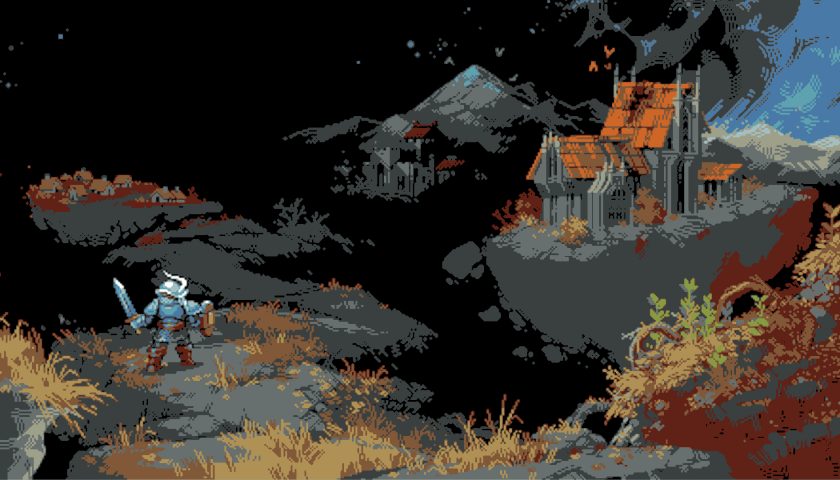 In a foundation of darkness, we are an apotheosis of evolution, but also the creator of our own agony, our perpetual cyclic chaos.

And this is Loop Hero – the early entry to the next hybridisation of the roguelike, as the genre continues to evolve and progress our unfounded dreams into the new decade.

To start, I can confirm that any semblance of notion that the premise of Loop Hero is “simple” is laughably deceptive to the preliminary loop-artist. Be warned that this manipulation is proposed through the simplicity of its graphical style or the bit-tone of its soundtrack, and you will only learn to appreciate the comfort of one of these aesthetics; the other you will compare to a toddler chewing a miniature 1997 dial-up modem in his mouth and randomly opening his jaw to allow distortion to permeate through his teeth. Once you have adjusted your auditory expectations (or in my case, turned off the music entirely), you will appreciate the true complexity of Loop Hero.

Similarly, the simplicity of the gameplay is misleading. Combat and movement are automated, and rewards distributed randomly automatically. It was a passive experience in some ways, but the environment is built around the chance metrics of your deck. Yes, the last few years of roguelikes started experimenting with the incidental outcomes of deck-building around the avatar, with Monster Train and Slay the Spire allowing our avatar to enter the world as a “blank slate”. It is a tried-and-tested pathway to rogueosity. However, this comes with the caveat of how controllable the deck should be by the user, and where Loop Hero’s decisions about its deck-building lean more to strategy than they may like – where Slay the Spire minimises its control over card allocation using a class system (and the deck is technically built over each run), Loop Hero harnesses the chaos by allowing the deck to be built before the run, giving the player control over the potential cards that might arise. This does question the true classification of this game in the roguelike genre.

That main impetus for control stems from the camp development that your character discovers upon their first “death” at the hands of the goblin or glob or giant crab spider that is destined to dwindle your health to zero. The camp or town allows you to construct buildings that will give your avatar either different cards for their deck, additional mechanics in the game (such as health potions that are used automatically, or the ability to gain experience points during the run to unlock passive abilities). But the town contextualisation is a blatant attempt at altruism –in the Year of Our Roguelite Lord 2021, we have been so programmed to drown in our own tragedy that it seems almost foreign to bring others into our dramas (aside from the annoying logic-sauce that needs to be drizzled to justify how your character is brought back to life. Hades has honestly ruined that mechanic for all of us and I do not believe that any other game will ever bring the death-rebirth mechanic justice ever again).

In actual fact, the game has a perfectly suitable method of transporting from run to residence that was not available in The Year Of Our Roguelite Lord 2020; the ability to “walk the eff away, bitches”. Yes, this is novel to a post-2020 world where we are so used to being locked into our disaster-chaos until our inevitable demise by pandemic or routine. This is why I have fallen into the beautiful twin-birds of the walk-away option and potentially ruined the game for myself.

“Playing safe” and retiring the run when your character walks over the town tile allows your character to retain all of the resource goodies that are collected during the run, which is the main/only way to develop new units and buildings in your town. However, this retreat tactic makes the grind incredibly slow (in comparison to retreating outside of town that allows you to retain 60% of resources accrued or death that leaves your corpse rotting with 30% of your loot). In actual fact, all of these options made the town unlocks painfully delayed. Irrespective of this, I have only died once in Loop Hero, and all I felt was the frustration at all of the materials I lost rather than other decisions I had made.

This meant that I did not unlock some marginally interesting cards or even my first additional class for a long time because resource acquisition was very slow. I would argue that unlocking the rogue class after a very long resource-grind in a game where the genre is its own namesake feels almost criminally negligent. However, it did at least introduce a new playstyle to the game. Where the warrior class is focused more on health regeneration and defence, the rogue wants us to “crit that crit baby”, with stats focused on critical chance and critical damage. The way that these classes handle the distribution of armour and weapons for your character differs as well. The warrior gives the vanilla experience of “kill thing, drop loot, either wear loot or leave it in your inventory”. You can never drop items in your inventory – they just continue to shuffle along until the item in the bottom-right of your inventory is turned into materials. The rogue collects the organs or orifices of their enemies like an adorable pixellated sociopath, which are then stored in a soggy bag of holding until there are auto-exchanged for weapons and armour when your character walks over the town tile. I wish I was joking but it does momentarily shift your wonder away from the ridiculousness of your predicament and wonder more about the absurdities of your encampment (that would trade entrails for literal high-quality gear ). However, when I am destined to kill 23 enemies in a single loop, it is inevitable that half of my gear is hidden and auto-converted into materials. I wish I could say more about other classes, but that is literally the only two I was able to unlock in the time I spent on the game to date.

At its essence, Loop Hero is the actualisation of 2021 – encapsulated in its pixellated historical fiction. A lone hero is on the precipice of acceptance of the new world order that is built on routine and predictability, traversing a world that seems tangentially familiar to them pre-pandemic. However, the protagonist is still caught in a pre-evolution fear that idealism is not a strong-enough armour to negotiate this dominion and evolve themselves. Therefore, despite the hero feeling a sense of obligation to break the cycle, they are presented with numerous roadblocks to that goal. Unfortunately, the roadblocks are not the enemies along the way but the listlessness of the world itself – slow to reward progress and building pre-requisites into any attempts to move forward.

We feel a need to be moving forward and making progress in 2021, and Loop Hero is either frustrating in not riding this momentum with us, or wise in telling us to slow it down and get the right environment to move on.