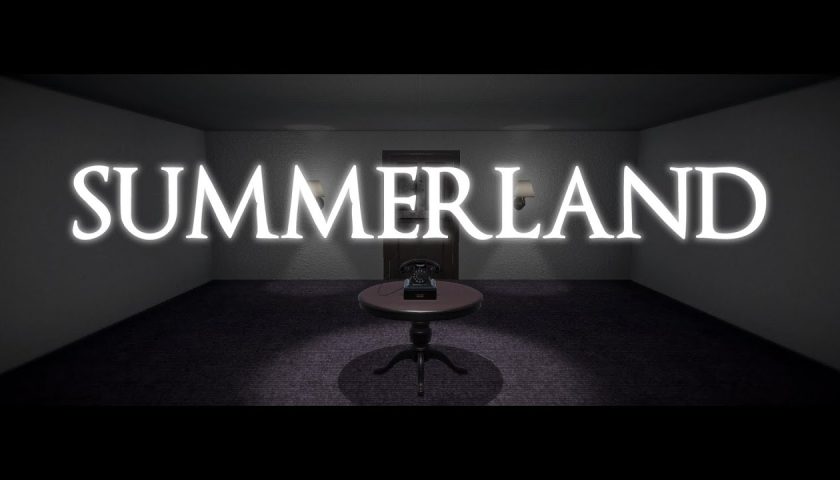 Nobody knows what happens when you die. Plenty of people think they know what could happen, but there is no known way to prove one way or another. This makes this space an interesting playground for games and other media to explore – and a good time for questions on morality to be pondered.

Summerland is a two-hour exploration of the life of Matthew, a middle-aged American cop. Matthew has died, so now it is up to an entity known as the Judge to run through key moments leading up to this (un?)timely demise before Matthew moves on to… whatever is next. The Judge warns, however, that he… often gets the bad ones. So don’t expect sunshine and rainbows.

The coalescence of Matthew’s final story is, as you can imagine from the premise, murky. Without getting into too many specifics, Matthew has done some pretty unambiguously “bad” things to get to this point. You’ll spend the game playing through a collection of chronological scenes, experiencing the strains on Matthew’s life, the decisions behind his actions, and the consequences that follow.

Between scenes, there will be a one-way conversation with The Judge, which may also include an either/or question for you to answer before progressing. I wasn’t expecting to have to actually make a decision regarding the trolley problem, but that’s the type of philosophical pondering you’ll be faced with here.

It’s all pretty entry-level morality questioning throughout. That is by design.

Summerland is the third project to be released by Conner Rush. Summerland was written, coded and created in Unity by Conner. Four voice actors were cast by Conner, after putting a call out on Tiktok looking for those interested in a role. Conner started his studio, Fyre Games when he was 12. Work on Summerland took over a year, releasing in December 2020 not long after he had turned 19.

The last decade has seen rapid advancements take place in the games industry as a whole, on many fronts. Most of what gets the heaviest coverage and marketing budgets are the graphical advances at Naughty Dog, the evolution of how we interact online with Fortnite and the degree to which gambling has infected our hobby with loot boxes. But underneath all that is so much more exciting – the democratisation of game-making tools; the way entire genres are created, expanded upon and matured; people from all over the world, of all ages and backgrounds, are able to create and tell stories.

It’s so astounding to me, someone a decade Conner’s senior, that this full-fledged story ruminating on death and morality with full voice acting and existential questioning even exists. And it’s free.

Philosophy as a subject isn’t often something many people discuss on the regular. As a result, the idea of even thinking about questions outside of our everyday lives gets pushed to the background, left to the realm of intellectuals and stoners. Yet, now more than ever, it’s so important to consider how best to live a good life with purpose and dignity, and how we can simply just be a better person today than we were yesterday.

In an interview on an episode of the Lore Party Podcast, Conner talked a bit about how he created this experience to be an exploration of base-level philosophy. Finding inspirations in such things as (the excellent) The Good Place, this was to be an introduction to ethics and philosophy for people who maybe haven’t considered the types of questions asked before.

The point of philosophical thought is that there are no definitive answers. Even knowing this, it is still important to consider the questions, contextualise them through our own lived experiences, and help try and find semi-answers that reflect our existences and help us live better lives. How different people feel about discussing ethical dilemmas at an intellectual level definitely varies from person to person, but there is one thread consistent across every human on this planet – we face the reality of managing ethical decisions in living our lives every single day. It’s important to consider our actions in context with our immediate situations and examine the impact we have on one another’s lives.

It would be wonderful if we could leave philosophical thought and ethical dilemmas to the realm of intellectuals, to live our lives not having to worry about the consequences of morality. While Summerland is first and foremost a story in service of contemplative thought for the player, it’s also a damning critique of the failure of the structural systems that we live under.

Matthew is, by all accounts, a decent man before we come into the picture. He’s been doing his job for decades, has a house and a family. All the things you expect from someone living “the dream”. It takes but a small push from forces he cannot control to put Matthew under strain, and then to lead him to commit worse and worse acts of atrocity.

Lack of support during hardship caused by a capitalistic system, crossed with the crushing profit motives of companies benefiting from that system, lead Matthew to a position of desperation. As a result, things take a turn for the worse. And, as the beginning of the story has already revealed, Matthew is now dead. The final act of his life compounds in negativity – his actions cause chaos and damage to others involved, and those that know him are unsympathetic to his reasoning.

People are complicated. Despite the justifications in Matthew’s story, I found his actions morally reprehensible alongside his co-workers. But that’s the thing. The actions he took weren’t without reason – and when a person’s hands are forced to unspeakable acts by powers outside their control, to be forced down a path they would never normally choose to take, how much blame can be laid solely at the immediate perpetrator’s feet?

Summerland is a fascinating little game from a budding young creator wanting to make games about something. Living ethically in a world where ethics can never be set in stone is something we have to do every day. Combine those two things into a short game with a thoughtful story, which you can play for free right now? Why not.

Summerland was reviewed on PC. The game is available for free on Steam and Itch.io