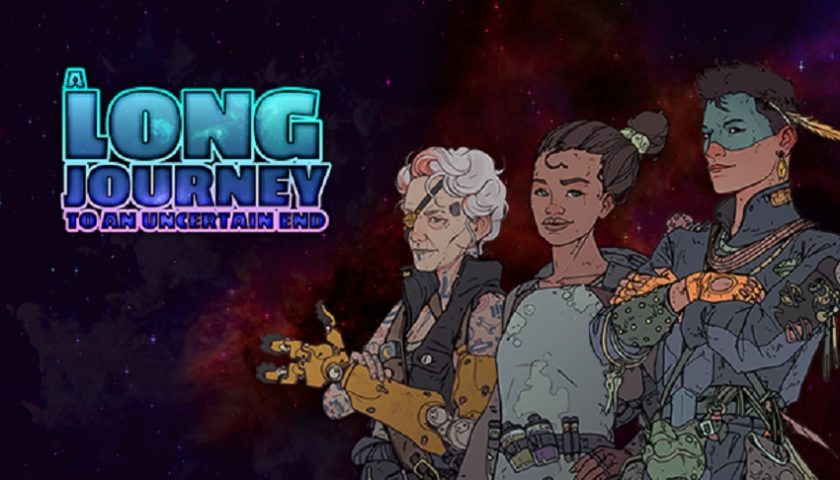 Things have been tough for the indie scene over the year or so. The impact of Covid19 and the subsequent cancellation of every games development/promotional activity has hit indie developers hard. This is where Indie Boost comes in. Player 2’s attempt to right that ship in a small way. Check out these titles folks and help Indie Developers to keep filling our lives with creativity and originality.

Indie Boost – A Long Journey To An Uncertain End

Stop me if you’ve heard this before: an eclectic collection of colourful characters come together to inhabit a spaceship, going on spacefaring adventures that may-or-may-not involve possibly-but-maybe-not-always legal shenanigans, getting themselves into mischief before just getting away at the last second?

Actually, don’t stop me, because this setting and premise are pure catnip, and from what I’ve played of upcoming game A Long Journey To An Uncertain End’s demo from their recently launched Kickstarter campaign, fans of this type of story are going to end up head over heels for this one.

Pulling inspiration from the likes of Firefly and The Outer Worlds – This project does boast ex-Obsidian (and Telltale) writers and devs – A Long Journey To An Uncertain End is smaller in scope, yet not in scale, to those cult favourite worlds. A sleight of questionable characters, wild west worlds and a universe of opportunity for those willing to bend the rules awaits. Laid out as a text-focused adventure with resource management and choices aplenty, you and your crew make your way across the galaxy looking for work to keep you afloat while attempting to keep the law off your back.

In a bit of a twist from genre conventions, you are not a suave captain flying your very own rust bucket across the stars. No, you are the rust bucket flying across the stars. In the world of A Long Journey To An Uncertain End, sentient ship AI have been outlawed and destroyed, with any still currently around needing to lay extremely low in order to simply keep their metaphorical necks. This poses problems for you, being a sentient ship AI. Rumours of your existence persist, prompting you ever forward, hopping from planet to planet, finding work for your crew wherever you can in whatever form is available.

Said crew is a fantastic bunch of misfits of the expected archetypes, all with their own lives, pasts and ambitions. Every single one of them is instantly likeable, from the cook (definite Parvati vibes) to the thief (a young man who speeds around in his hover-chair) to the muscle (an absolutely fabulous drag queen). This demo is only short, but the quantity and quality of the writing on each of these characters already has me itching to see what further shenanigans they’re going to get themselves in.

Part of the pitch for A Long Journey To An Uncertain End is for the creation of a more inclusive universe, and I’m already in love with what Crispy Creative is building. Characters are importantly not defined by their gender, disability, sexual preference or any other signifier – it’s simply a part of who they are. Stories about queerness and other personal aspects are so important, but stories that let people of all stripes just exist in the world – like they already do in the world we live in – is just as radically important.

Apart from reading a whole lot of excellent writing, your time spent on various planets sending your crew out on jobs to earn resources, which in turn help keep yourself and your crew in the air. Each job is itself a mini-story, adding flavour both to the world and to your characters. Different jobs suit different crew members better – fixing an electric fence is better handled by a mechanic, for example – and each job takes time to perform. This is important, because the longer you spend in one place, the closer the feds get to nabbing you.

At the end of every job, a wheel is spun to determine how successful the job was – either “good”, “OK” or “fail”. When you send characters that are better at certain jobs to them, you have more of a chance to land a positive outcome – but there is still a chance for a full-on failure. This… is probably the weakest part of the demo honestly, as it feels at odds with the writing accompanying each job. The story thread might sound excellent and like everything went really well (especially when choosing dialogue options specific to characters who are suited to the job) but spinning a failure is still possible, landing you with heavy losses to supplies. You can use “favours” to try spinning again, of which you have a very limited supply of, but every time this happened to me I then just spun another failure, which felt deflating. If anything, it feels like it would be better for there to be even less of a chance of failure (if none at all with appropriate crew members on appropriate jobs) and cashing in a favour should guarantee a positive outcome.

I did also encounter a few minor bugs in my roughly 90 minutes of play, including finishing everything I could possibly do with 58 days still on the clock (fairly certain this wasn’t meant to happen, as the demo was only meant to be 20 minutes long!) but I’m happy to say that nothing that negatively affected my play occurred. It’s likely patched out now, but I did actually quite enjoy watching my crew run backwards up the ramp back into the ship on occasion. Thankfully this is just a demo of course, and the game still has a ways to go in development, so I have no doubt that a lot of this will be smoothed over by the time we hit a full release, bugs and balancing included.

Crispy Creative have just recently launched a Kickstarter to raise some cash for the rest of A Long Journey To An Uncertain End’s development, so you can check out the demo for free yourself here if this sounds at all intriguing to you. I highly recommend checking it out for the writing alone – if what’s here already is anything to go by, the full game is going to be a space opera for the ages.

You can find out more about A Long Journey To An Uncertain End on the game’s official website or Steam page, or check out the Kickstarter here.