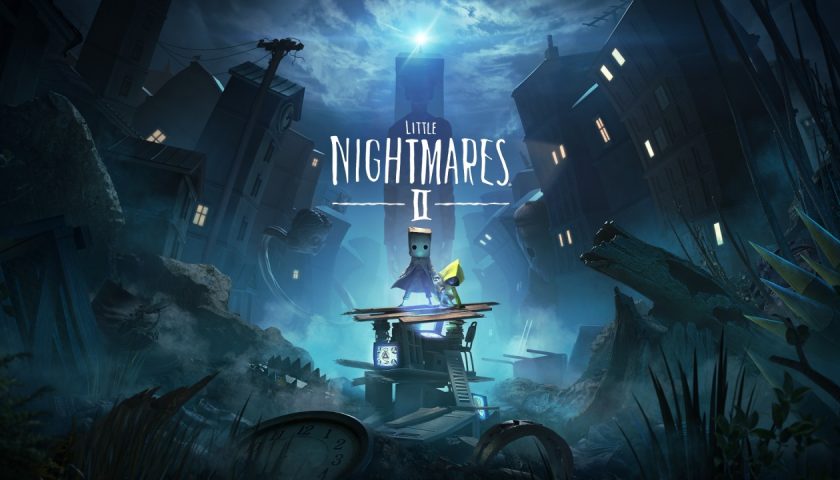 When I played the demo of this game back in October, I thought it very important to point out that you should not go into this game expecting, as the name suggests, nightmares that are small. The name is lying to you. I’ve been told that there are children who enjoyed its predecessor Little Nightmares with minimal fear, and I demand to know where they got their bravery from, and whether or not I can harvest it. Because just as was the case with the first Little Nightmares,  there’s something about the spooky, sorrowful and downright surreal world of Little Nightmares II that taps into my deepest childhood fears and unsettles the hell out of my adult mind. But god does it do it well.

Though not an accurate descriptor for the nightmares, the ‘little’ of the title refers aptly to the two protagonists of this suspenseful platformer. Mono, a young boy who wears a paper bag on his head, and Six, his companion and the familiar protagonist from Little Nightmares, are disproportionately sized for the distorted world around them. Though you’ll play as Mono, Six will be by your side for most of the way, directly and indirectly guiding you through a world that seems determined to swallow you whole. What starts as distrust and apprehension between the two children soon becomes a partnership built on their common desire to escape this grotesque world, which they can only accomplish by getting to the source of the horror – the signal tower that has caused this world to rot from the inside. Along the way, they’ll encounter a variety of monsters that seek to stop them, and from the slender and stretchy Teacher to the hulking and armed Hunter, their common goal seems to be to ensure your demise.

Simply, you are tiny children navigating a  world full of large, scary monsters who all seem to want to devour you, and who have come straight out of my nightmares. Though they’re all in some way human, they’re also distinctly… not. They’re monstrous in the way you imagine when you’re a child-like when you’re first at school and your teacher tells you they can always see you because they have eyes in the back of their head. You know they don’t, they can’t, people don’t have those, but you’re a little scared anyway. It’s that fear, made real. The exact narrative of the game is at times unclear, but it kinda doesn’t matter. The world itself is scary enough that you can easily see why the protagonists want to escape it, almost ignoring the horrors they’re seeing on their journey in order to progress and get out as quickly as possible. There’s enough there to hint at the story, but it’s vague enough to leave room for imagination.

The world Tarsier Studios have created here is perfectly tense, and its effectiveness is largely due to the immersive score and soundtrack created by Audio Director and Music Composer Tobias Lilja. Each screech and shuffle of an enemy feels ominous as it cuts directly into the almost-silence of the rest of the game, with the moments of actual musical soundtrack clearly carefully chosen. This audio direction, coupled with a perfectly macabre and graphically stunning set of worlds, is ultimately what makes this game succeed in what it tries to do.

Each environment is distinct but equally gloomy, with areas like the school, hospital and apartment complex each presenting its own unique set of challenges. While most of the gameplay involves puzzle-platforming and using Mono and Six’s size to work together to climb, crawl under or swing on objects in the environments, some of the levels require unique tools in order to traverse through the world and avoid capture. At times Mono will need to wield weapons much larger than him to whack enemies or use a flashlight to stop sentient mannequins in their tracks. There’s just enough variety in these puzzles that no mechanic overstays its welcome – as soon as you start to get sick of using a specific item, you’ll move onto a new area. Each new tool is also simple in design, so learning to use them never feels overwhelming, it just feels like you’re evolving and adapting to each new environment alongside the protagonists.

There’s clearly a lot to love here, and the game nails most of the things it sets out to achieve. It excels in its tone, level design and variation, graphics, and sound design. But it isn’t perfect. As is often the case with action-platformers, the game falls victim to some frustration-inducing problems caused in part by its 2.5D perspective, and in part by finicky controls. While visually stunning, the 2.5D perspective can lead to some annoying deaths, particularly in some of the game’s larger chase scenes. On more than one occasion, I was running from an enemy only to find I wasn’t jumping onto the part of an obstacle I thought I was, which would then lead to Mono getting stuck and quickly caught by the pursuer (which means instant death). There are usually a run of these touchy moments in a row, so if you mess up one, it means you need to get through them all again and hope you don’t make a tiny mistake, and it feels quite unforgiving. Part of the learning curve of this game is realising that you often need to make mistakes to learn how an environment works (and the other part is learning to be patient), but when it can be tricky to see where you are in the space, it can feel like an unfair way to lose. Succeeding at this game requires patience and persistence, and while it’s ultimately worth it, it can be easy to get discouraged by the tedium of having to replay a section that you should really be clearing.

Little Nightmares II, despite its often grotesque world, oozes charm and a macabre sense of whimsy that makes it stand out from other games in its genre. Little touches like the assortment of hats that Mono can find throughout the world to wear in place of his paper bag, or the fact that the two protagonists can move through the world holding hands to really showcase their solidarity demonstrate the attention to detail that makes this game feel special. Along with some moments of frustrating gameplay come some cleverly designed puzzles, and an assortment of short-lived mechanics mean that no part of this relatively short game overstays its welcome. For fans of the first game, this is more of the same and an easy recommendation. And if you didn’t play the first one, but like feeling terrified, tense, and tantalised all at the same time, this makes for a solid standalone experience. Just don’t expect the nightmares to be little.