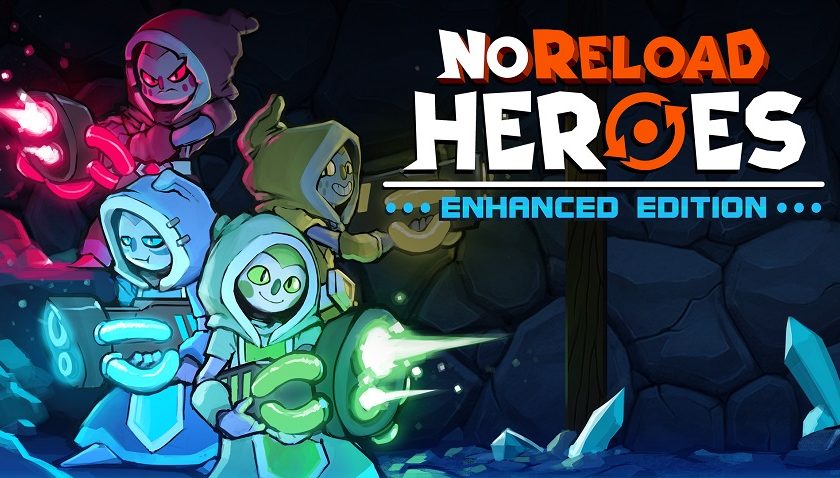 No Reload Heroes: Enhanced Edition – All Promise No Execution

Something I’ve always appreciated is checking out games that try to blend elements of others, with the result being something new, or different from what has come before.

I found the concept behind No Reload Heroes: Enhanced Edition to be intriguing at first glance, with its aspirations to shake up the formulas of both Roguelites and Arena Shooters.

Most of your time will be spent with the Tower Climb mode, which has a neat concept: a group of 1-4 players need to make their way up the Mage’s Tower. At its summit stands Mephisto, a robot of their creation who went rogue when powered up, blasting them down to the deepest depths below.

Each floor consists of a series of rooms, which you’ll clear out one at a time. The tower is split up into three regions – and after clearing the region’s boss, you’ll move onto the next. It’s pretty much as you’d expect for this sort of game.

Compared to the sparse arenas offered by other titles, the furnished spaces you’ll battle through are nice to look at, but I couldn’t help but find it to be a bit of a drawback, particular as on many occasions, I’d enter a new room and find myself pinned close to the entrance whilst I tried to fend off a wave of enemies.

It betrays one of the things I love about arena shooters – dancing about an arena, taking on the threats present, whilst trying to minimise the damage they inflict upon you. Part of that is down to level layouts, but also the combat mechanics.

The rooms aren’t populated with legions of enemies which can be taken out by a few shots, but rather a small pack of strong enemies which will take some time to dispatch.

This made things tedious when playing solo, as I found the combat doesn’t allow for any real strategy. If anything, this is where the game’s focus on co-operative play comes to the forefront.

Focusing on the co-operative play isn’t a bad thing at all, particularly as the goal of the developers was to create an experience that can be enjoyed by players of all experience levels.

The first way is around how players level up through the game. Instead of players fighting to gain experience individually, you’ll find there’s a shared experience pool to which all players contribute by collecting the tokens released from defeated enemies.

Once enough has been collected, you’re prompted to pick one of two perks. If all players come to a consensus, then said perk is chosen, otherwise, the game will randomly pick one for the team.

There’s also what happens when a player dies. As long as another player can get to them, they can be resurrected and return to the fray. It’s only when all the players are dead that the game truly ends.

Once again, playing solo is a big disadvantage here: as once you die, that’s it.

Back to the start with No Second Chances.

Finally, there are the weapons. As enemies are defeated, along with those experience tokens, enemies will drop weapons along with health and power-ups.

The game does offer a variety of them – covering most of the types you’d expect – shotguns, rifles, rocket launchers, and more. A variety of options is great, but when playing solo, I tended to find myself gravitating towards a small subset of them – particularly the rifles, the rocket launcher and the homing shots.

This is was mainly because they offered the best balance between recoil, firing rate and damage potential. It really, really was helpful for being able to deal with those situations I wrote about earlier.

When playing in a group, having each player take a different weapon has the potential to offer some major tactical advantage. From using shotgun-style weapons to help with crowd control, to giving others the more powerful ones for being able to hit those targets, it certainly can help with clearing through the rooms at a much quicker pace than a solo player is able to.

No Reload Heroes: Enhanced Edition does aim to stand out with its focus on multiplayer action, particularly how it’s designed to be approachable by players of all experience levels. Which makes it one that is worth considering if you have a gaming group with kids, or less experienced players, as you can get some fun out of it in short bursts.

If you’re primarily going to be playing solo… or with a more experienced group, then it’s not one that is really going to offer a lot of long term challenge or depth, making it hard to recommend.