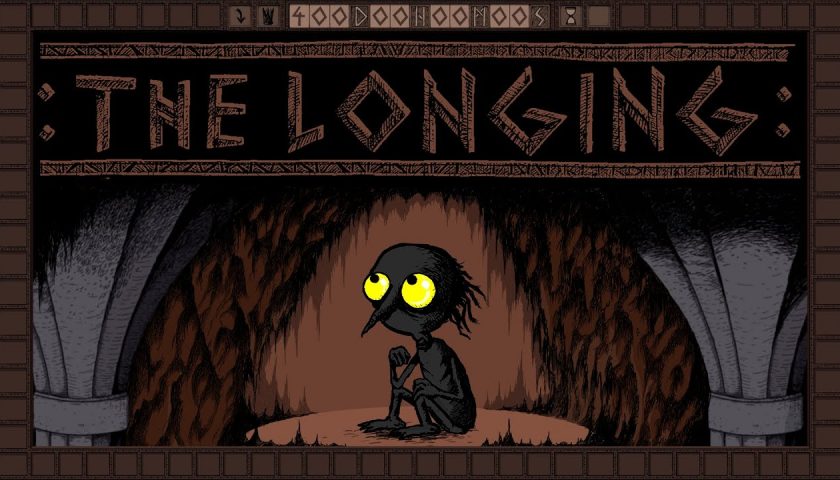 The Longing – Time To Ponder

The Longing is extremely singular in its approach. I’ve never played anything like it; I probably never will again. But damn if it hasn’t left a significant mark on my psyche – an experience I’ll be thinking about for years to come.

If you’ve encountered anything online about The Longing, you’ve likely seen that it “takes 400 days to play”. This is true insofar as there is a countdown timer set for 400 real world days that starts ticking down the moment you start the game… but in all honesty, it’s (probably) not going to be over a year before you see “the end”. What it does do however is set a very deliberate tone for the time you will spend playing, and thinking about, The Longing.

Basically, everything you actually do in The Longing could be classified as boring. You’ll spend hours simply watching your little buddy, a being known only as “the Shade”, walk from place to place, collect items and solve the odd puzzle. The items you’ll collect the most of in your journey are coal, moss and disappointments. I don’t even mean that metaphorically – they are literally something you collect multiple of and can spend in a particular place like currency. Yet somehow, over the seven weeks or so I spent with the game, not for a single second was I ever actually bored.

In the beginning, the Shade is tasked with a single goal. The King is going to sleep for 400 days to conserve his energy, and it is up to you to wake him when that time is complete. Upon waking, the King will use his incredible power to “end all longing”. What this amounts to for you is… waiting. For 400 days. In real-time. That’s essentially it.

The only way to make that timer tick down any faster is to make the Shade’s home a comfier space for them to spend time in. You can do so through a slow exploration of the surrounding caves, scavenging various items such as books and crystals. The Shade is not exactly in a rush, however, so don’t expect 2D Mario levels of bounding about.

There is no main menu in The Longing. The only space outside the game world is a loading screen when you load the game up – a pure black screen, save for the word “WAIT” in the centre.

This is The Longing in a nutshell. Everything takes an incredible amount of real-world time to take place. When the Shade walks, they move across the screen at a slow plod. The various puzzles about the place all involve the passing of a certain amount of time. There is a door that, once you’ve confirmed you want it to open, takes two full hours to do so.

It sounds excruciating, but it’s incredibly liberating. In stark contrast to games like Assassin’s Creed – where a cascading waterfall of “rewards” in skill points, gear, levels and ever-increasing numbers desensitises you, removes all notion of meaningful achievement and leaves you feeling hollow – The Longing’s demand for delayed gratification makes the process of finding even a simple scrap of paper a joyous occasion. That piece of paper can be turned into art and hung up on the Shade’s wall, so then time moves just that little bit faster.

The slow pace gives every action in the game an honest impact. Think before you act, take into account the time it will take you to get somewhere. No fast travel, no mopping up of pointless fetch quests. Everything is deliberate.

There is an aspect of loneliness, of fear of being alone with your thoughts, present in this game. A feeling like you need to fill your time with distractions in order to make your life more meaningful – yet that only results in feeling like time is going faster. The Shade is almost afraid to be left with only their thoughts for company.

Yet, sitting down for an hour of cave wandering has been exactly the thing I’ve needed so many times over the past couple of months. Walking out of the Shade’s home, drinking in the incredible otherworldly sounds of the various caverns and just wandering about, has given me a sense of relaxation and calm not a single other thing has in a long time.

This weird dichotomy continues to play out in my mind. Maybe I’m just meant to be a hermit. But the pondering of the Shade, the incredibly dark places it goes and the incredibly thought-provoking subject matter it laces into the very fabric of this game are tough to quantify. I genuinely thought for some time that suicide was the only “good” way out, if that gives you any indication. (Importantly, this is not a cheap use of something incredibly important and delicate – it handles it with extreme care). I don’t want to get too into specifics because that’s kind of the point, but The Longing is cerebral in ways few games ever are.

I’ve seen almost everything in The Longing now, bar one thing. The end. I still don’t know how I’m going to approach this yet. But importantly, the Shade’s journey is about so much more than the destination.

There is very little out there even remotely like The Longing. You’re not going to come here for some mechanically complex, brain-switch-off experience – quite the opposite. Given the opportunity, it will stick in your brain long after you say goodbye.

The Longing was reviewed on the Nintendo Switch with code kindly provided by the game’s publisher.