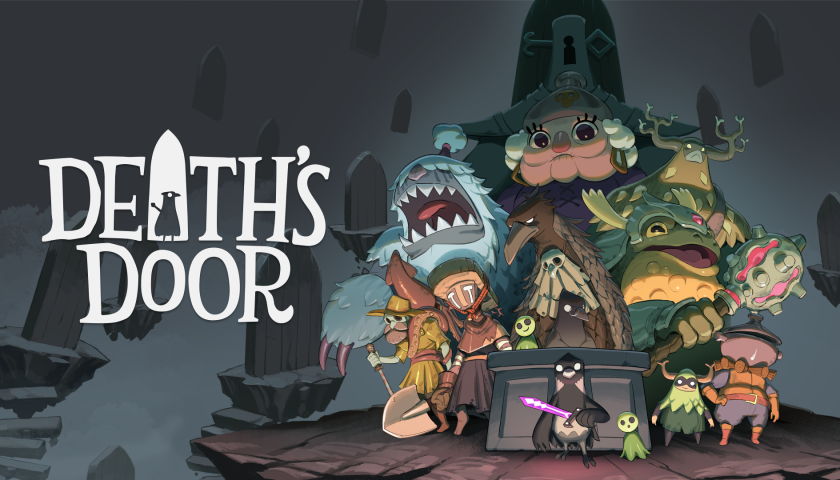 When something is described to you as ‘crow Zelda’, you know it’s going to be intriguing. Death’s Door, the next big title from Titan Souls developers Acid Nerve, caught the attention of many as part of Devolver Digital’s showcase at E3 this year – and we were lucky enough to get our hands on a preview ahead of next month’s launch.

In this fantasy-noir-mystery adventure, you assume the role of a crow whose day job involves reaping souls of the dead and then logging your timesheets – normal things for a crow. However, when a routine soul-reaping goes awry, and your assigned soul is stolen by an unexpected opponent, what should have been a normal day becomes the start of a bigger adventure – one that involves taking on a variety of unsettling creatures as you attempt to make up for your lost soul and get your work back on track. To do this, the crow hero uses a variety of weapons and magic to venture through dark worlds, meeting a cast of morose yet amusing characters along the way and building skills to allow them to enter new sections of the world.

Gameplay-wise, it’s impossible not to compare Death’s Door to a more macabre, more challenging Link’s Awakening. The perspective of the world, the dungeon-like structure of the game’s various sections, the way you collect items to open up new areas, and even the sense of foreboding lingering over each new character you meet feels very much like the Zelda classic. But there’s no denying that this game has its own flavour. There’s a dark humour that runs through this tale that makes it feel more mature than the greats it takes inspiration from. The characters wouldn’t be out of place in a Miyazaki film, for example – with one boss in particular looking like she could have come straight out of Howl’s Moving Castle – but there’s somehow a darker edge to them here. It could be the fact that the story is literally centred around death, but whatever it is, it’s a welcome addition.

As beautiful and mysterious as this game is, it’s certainly not easy. Every single enemy comes at you in a different way, and you have to learn quickly to be very aware of your surroundings. Succeeding in combat seems to frequently require a mix of strategies, and there are mini-bosses scattered throughout the world that take a few tries to master, even once you feel you’ve got a handle on how the combat works. Half the battle is in learning their attack patterns and knowing when to strike, and the generous checkpoints that this game seems to offer meant that though I found myself having to replay sections – even in the early section of the game that I had access to for the preview – I could treat each attempt as a learning exercise and still feel enthusiastic about jumping right back in. The story is one of hope and perseverance, and somehow that made me want to persevere too.

Even having only played the first ‘dungeon’ or section of the game, it’s clear to see that this is going to be something special. A lot of heart has gone into creating this world, and it feels like one of those classic adventures that’s going to grab at my heartstrings and force me to carry it with me in my mind. This game offers a dark and compelling world filled with optimism and nihilism in equal measure, and I can’t wait to experience the full game when it launches on July 20th. It looks like it’s going to be one of those rare, unexpected gems, and I think Acid Nerve are onto a winner here. You can wishlist the game now on Steam or the Xbox site.